As commentators have mentioned, Belgian director Bavo Defurne’s 1997, 17-minute short Matroos (Sailor) has the look and feel about it of the photographs of Pierre et Gilles and, to a lesser extent Werner Rainer Fassbinder’s Querelle—without any of Genet’s sadomasochism. Indeed, this sailor on shoreleave  (Tom de With) probably only vaguely knows his admirer, a young boy (Joram Schurmans) trapped in the family bathtub fantasizing a relationship with him. The sailor, who appears to be the boy’s his next-door neighbor, has returned home to spend a few days with his sexy wife, while the boy plays voyeur to his uniforms being hung out to dry on a clothesline. Between boy and neighbor not a word is spoken throughout. 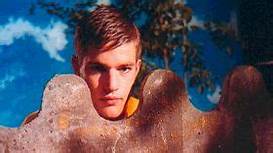 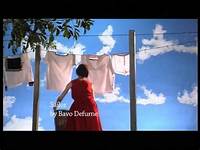 In retrospect we realize the scene we witnessed in the first scene has been cooked in the boy’s fervid adolescent homoerotic imagination. While swimming in the tub, he imagines that he and the sailor motorcycle to the beach, the seasoned sailor tearing off the beer cap with his teeth and chugging the bottle’s contents down in one long swig. He opens the boy’s bottle similarly, takes a sip and hands it over to the boy before they begin to tussle over it, eventually falling down a small dune, the sailor momentarily straddling the boy as if he were about to dive in for a kiss. He pulls out from the deep sea of the boy’s desirous eyes just in time, and the two, again posed quite deliberately against a green screen, motor back home. These pretty scenes, the director hints, are nothing but the soft pornographic photographs of the boy’s cinema of the head.

While the sailor is at sea, the kid conjures up his sailor’s encounter on ship with another sailor. These two, once more, are not sexually inclined as much as they are interested in wrestling over a bar of chocolate which the boy has sent to his friend, over and over again, as in a loop tape, representing, apparently, the boy’s own lovely memory of it which he repeats in his head. The two sailor’s brief struggle for ownership of the chocolate bar and the cover of the box it came in (the second somewhat jealous sailor presumably desiring to know who has sent the chocolate to his shipmate), reminds us of the tussle of the boy and sailor at the beach. 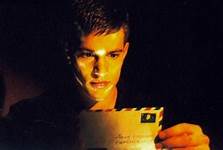 The sailor had previously sent him an exotic flower he plucked in an Ecuadorian rain forest, fascinated by its penis-like white stamen set against the bright carmen color of its flower. And in response to the chocolates the sailor now pulls down what looks to be the Milky Way, gently holding it between the palms of his hand for a moment before slipping it into an envelope presumably addressed to the bathtub-bound boy.

Within the envelope he also evidently enclosed a letter announcing that he will soon be back home. For on the day of his arrival, we see the young boy riding his bicycle to the pier. But if we look carefully, we discern that the technicolor pastels of the previous scene—worthy at moments of James Bigood’s Pink Narcissus—have become closer to the gritty browns and grays of the real harbor. And when the sailor deboards, after awarding the other sailor a gruff pinch of his shoulder, he greets the boy with friendliness, but hardly with the passion that it is clear the young man expects.

Apparently, he is waiting for the sailor to join him on his bike or at least walk aside him, but the sailor, against the washed out colors of the seaside warehouses, proceeds alone for several steps before the boy catches up, almost trapping the sailor in his path. Seemingly confused by the boy’s attentions, he walks around the bicycle and proceeds on his journey, the boy looking startled by the sailor’s inattention. Finally, hurt by the man’s obvious disinterest, the boy cycles off, clearly emotionally wrought by the incident.

The soldier stops momentarily simply to ponder what the boy’s actions were all about.

Homosexual desire has once more met up with heterosexual normative behavior, unknowingly crushing its victim. The real destroys all fantasy with which it comes in contact.

The young boy playing with boats in his bathtub has now become a young adult who in the future will probably shower with the others boy at school, remembering his sailor—if he remembers him—with a sense of slightly melancholic embarrassment. But the colors of his world will never again be so intense.

Posted by greenintegerblog at 4:50 PM