the museum of mayhem

In the late 1970s or early 1980s (several sources suggest the project was begun in 1981), Charles Ludlam worked on a silent film Museum of Wax, a work left unfinished at the time of his death of complications from AIDS in 1987.

The incomplete work was shown only three or four times after; but in 2010, singer/songwriter Anthony Hegarty along with the New York Film Forum approached Ludlam’s surviving partner Everett Quinton, who reported that both Museum of Wax and another of Ludlam’s film’s The Sorrows of Dolores were still sitting on shelf in his closet. Making a digital transfer of the works and adding music by composer Peter Golub, the Film Forum showed the films on February 22 of that year for the first time in 20 years.

Since then, there have been only a handful of other viewings. But thankfully the Outfest site has posted the 21 minute work, featuring members of Ludlam’s Ridiculous Theatrical Company cast members—Quinton, Minette, “Crazy Arthur” Kraft, Lola Pashilinski, John D. Brockmeyer, and Black-Eyed Susan—in three small on-line segments. I also found these three segments posted on the blog of translator Tricia Vita. Vita, who as a child worked in carneys with her parents, translated one of the favorites of my Sun & Moon Press publications, the gay Japanese writer Inagaki Taruho’s One Thousand and One-Second Stories. 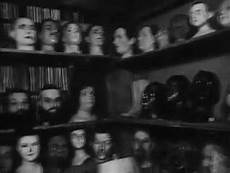 A mix of elements from the horror, comedy, and melodrama genres, along with moments of vaudeville-like slap-stick routines, Ludlam’s film is a highly fragmented and a fairly incoherent work, but its major concerns are quite apparent. Using his own and his cast’s talent as quick-change artists, Ludlam and others appear at various moments in numerous “drag” outfits, mixing their sudden appearances and disappearances with the wax heads and other body parts along with the wax tableaux of the Coney Island wax museum to suggest mayhem.

The narrative, such as it is, involves an escaped prisoner who seeks refuge in the museum, and who with the help of the museum ticket-taker temporarily eludes the police, in some cases by posing, as in old Marx Brothers and Bing Crosby and Bob Hope “On the Road” films, as another of the museum’s wax figures. 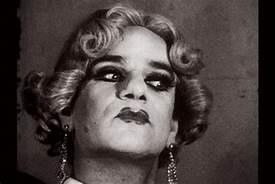 Other subplots include a bearded villain, evidently the owner of the museum, desperate to rape any woman that crosses his path, including the ticket-taker and an elderly woman visitor in a wheelchair. He is finally stabbed to death with a pair of scissors by a 1920s-style actress who might remind one of Sunset Boulevard’s Nora Desmond, an action that parallels one of the museum’s panoramas. To hide the body, she makes up the cadaver to appear in the Dr. Einstein exhibit. 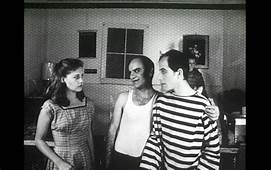 At another point our prisoner hero meets up with a second escaped prisoner and engages in a lengthy kiss among the body museum body parts with his prisoner-lover, reminding me of the two prisoners of love in John Requa and Glenn Ficarra’s 2009 film I Love You Phillip Morris.

The actress also kisses another woman for several moments.

In short, one of Ludlam’s major themes in this work is gender and sexual confusion, as well as questioning whether these figures are among the living or the dead.

Do the two kissing women, one of them a male in drag, represent a lesbian couple or a heterosexual pair who just happen to be cross-dressing? 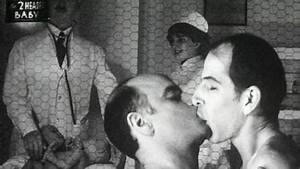 Were the two prisoners lovers in prison or aspects of the same self who have just suddenly come across one other in their zany escapades as escape artists? And what is the director suggesting by posing his kissing male prisoners in front of a display of doll-like wax children being brought into life? Do they represent the offspring that this couple will never be able to produce, forcing us to ask if they are prisoners of their own gender?

Similarly, are some of the figures we encounter simply visiting the museum or are they variations of the museum’s wax figures momentarily come to life as in the later commercial film fantasy, Shawn Levy’s Night at the Museum (2006).

If one cannot quite argue that Ludlam’s film is profound or even as much fun as his numerous theatrical offerings, this black-and-white piece of cinema is stall enchanting. And we cannot help but ponder, given Ludlam’s highly expressive face, that he surely might have made a great silent film star. At least, before he died, he gave himself the opportunity to be just that.

Posted by greenintegerblog at 5:08 AM