Colin Gregg | We Think the World of You

your dog as my life

Hugh Stoddart (screenplay, based on a novel by J. R. Ackerley), Colin Gregg (director) We Think the World of You / 1988

The British director Colin Gregg’s 1988 film We Think the World of You is perhaps one of the oddest LGBTQ films I have yet encountered.

We might begin with the fact that despite the gay central character, Frank (Alan Bates), having long been in love with the bisexual ex-sailor Johnny (Gary Oldman), no mention of their actual relationship is even whispered throughout the film. Obviously, the fact that in the 1950s when this film appears to be set the fact that homosexuality was not only illegal in Great Britain, but that sexual activity was punishable by imprisonment accounts, in large, for that quietude its characters. 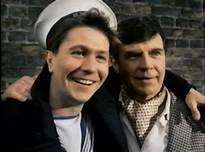 Although Johnny’s entire family knows about the relationship between the two men, his mother—who used to work as Frank’s cleaning woman—father, and wife refuse to acknowledge the fact, as if his payments to both the mother and Johnny’s wife were simply hush payments instead of Frank’s way of looking after his obviously incompetent, child-like lover.

Secondly, there is only one occasion in this film in which Johnny and Frank spend enough time together alone that they might actually have sex, and that is rather late in the film, and Gregg’s camera remains absolutely prudish about the event, not even showing them in bed or the bedroom for that matter. That can be explained that throughout most of this work Johnny is in prison, arrested apparently for having robbed someone.

Paramount, however, is this film’s rather perverse representation of their relationship in the form of Johnny’s Alsatian dog, Evie. Even critic Roger Ebert, who surely during his lifetime had seen and written about many more movies than I, begins his 1989 review:

Here is a movie about one love that dare not speak its name, and

another that can only bark. It is the only film I can think of about

the common human practice of projecting emotions onto animals—of

the way one would like to treat the human.

While I have observed many such instances of this transference of love in life, I have never before encountered a movie portraying it, least all an ostensibly gay film. The closest any movie I’ve seen that represents similarly represents love is Lasse Hallstöm’s My Life as a Dog (1985).

Evie belongs to Johnny, who also appears to love his pet more than anyone else. Indeed, as we discover late in this movie, the reason he has stolen the money that landed him in jail, was to purchase the dog after being refused the money—albeit without Johnny revealing the purpose of his request—by Frank. And we can hardly blame Frank for not “loaning” his lover more money, since their relationship, given the fact that Johnny has married, had two children, and is about to have a third, their friendship has resulted in only a few sexual trysts. A more adventuress being than Frank would have long ago looked elsewhere for love. 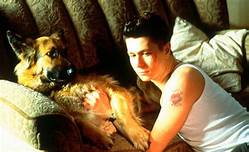 And truth be told, the modestly paid civil servant Frank doesn’t even like dogs. When entering prison, Johnny begs Frank to care for his pet, only to have Frank refuse any such responsibility.  Given Frank’s cozy, well-kept apartment overlooking the river on which rowing competitions regularly are played out is no place—as we shall soon see—to keep a now rather large dog. Moreover, Frank works regular hours and is out all day, as well, so he claims, as most evenings—perhaps seeking others to fill in for the hole Johnny’s absence has left in his life.

He assures his negligent loved one, however, that he will help pay for Evie’s expenses if she is boarded with Johnny’s mother, Millie (Liz Smith), and adds a few bob when he discovers that Mille will now also be caring for Johnny’s young son since his wife Megan (Frances Barber), being pregnant and caring for her and Johnny’s pre-teen daughter, needs time to keep up their shabby house and make visits to her husband in prison.

Accordingly, we now witness Frank making rather regular trips to Millie and her husband Tom’s (Max Wall) not-so-tidy brick rowhouse. Johnny’s entire family, we quickly soon discover, are rather wretched folk. Tom—suffering a great deal of pain from his back—has hardly a nice word to say about anyone and—rather absurdly given the obvious truth of the situation—is convinced, give Frank’s regular visits and the gallant kisses he awards Millie’s hand, that the outsider is attempting to steal his wife.

Millie, a mean gossip, speaks endlessly in a nearly incomprehensible dialect (I’m no authority about British dialects, but I am sure it would be immediately apparent to any one living in England) speaking from the kind of nasty disgust that keeps itself hidden away by smiles and cliché-ridden niceties, including that they, Johnny, and Megan all “Think the world of him,” which presumably is code for the fact that they couldn’t care less—except of course for his generous handouts he thoughtfully secrets in a bowl sitting upon their shelf. She is precisely the kind of figure which the BBC TV series Monty Python’s Flying Circus used to satirize in the early 1970s.  Dickie, Megan and his lover’s boy, is a chubby infant with an always open mouth crying out in anger for seemingly having ever been born.

Frank makes a couple of visits to this good-hearted couple, before the dog Evie, having been kept in the small, concrete-covered, backyard, leaps through an open window and into the heart of Johnny’s friend, to whom the dog appears to take an immediate liking as well. 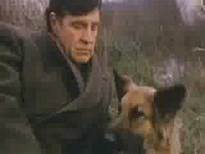 Gradually Frank discovers that only have Tom and Millie not been negligent in taking this large dog out for walks and runs, but have been beating him for his justified complaints. When Frank offers to walk to the dog, he can hardly keep up with beautiful beast on the run. Yet when he loses complete control of Evie and almost despairs of retrieving her, Frank discovers the animal politely waiting around the corner for him to catch up.

The rest of the film is given over almost entirely to Frank’s growing love of Evie, as he increasingly grows fearful of how Johnny’s beloved pet is being treated by the imprisoned man’s parents, who, it is gradually made evident, don’t walk the animal for weeks at a time and have grown brutal in their treatment of the beast, locking Evie away just as the government has his master.

Frank comes round more and more frequently to walk the dog, just as the couple grows more and more suspicious of his intentions. When he consults a dog keeper who owns a kennel what he might do, she replies that there is no alternative but to “shoot it.” When a dog is as maltreated as Frank has described Evie as having been, they grow vicious and are unable to control.

When he finally is able to convince Johnny’s parents to let him take Evie home during a weekend when they are planning to travel, he finds all his reservations about keeping a dog in such an orderly apartment are true. Yet we observe the dog laying beside him the next morning in bed, and clearly as difficult as Evie is to manage, the two have a wonderful rapport. He sends a telegram to tell Tom and Millie that he will keep the dog one more day and return her the next morning, but when he does so he discovers them livid at how he has described their treatment of the animal, and is refused any further contact with the poor beast.

Increasingly, Frank contacts Megan, hoping to have her convince Johnny of requesting a visit so that he can explain the situation with Evie. He also attempts to send messages through Megan that she might on to Johnny about the dog’s welfare. Yet all is in vain, and realizes, too late, what we have long suspected, that the family has not shared any of his fears with Johnny, and that they are all now involved in a pitch battle over Evie that not only symbolizes their son’s love but may actually determine their future relationship with the boy once he is released. Evie and Johnny have become one and the same.

When Frank finally is granted a visit to Johnny, his friend now seems less interested in the welfare of his pet than in how Frank has created further difficulties in his relationship with his parents and his wife. Frank even attempts to convince Johnny to let him buy Evie from him simply so that she might be spared the horrors she’s been suffering, but all to no avail. 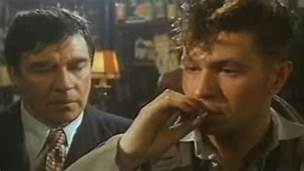 Although Johnny visits him immediately upon his release, spending what at last is a semi-joyful day in what is now Frank’s rather troubled existence, he discovers that Johnny will now never leave his wife, as he has promised in the past. Johnny. he further discovers, had purchased to dog—robbing to be able to buy Evie—because as a child, suffering in just the kind of household of which he is now master, his dog provided him with the only love he could find. When his childhood dog died Johnny cried for months after, and clearly the incident has left him with a feeling of emptiness ever since. Frank, in short, has only exacerbated Johnny’s problems instead of helping to solve them. And he finally perceives that he and Johnny will never be able to escape on the vacation they have both promised to one another. Frank has lost his lover to the mean-spirited, uncaring family that have created him and to whom Johnny out of habit and a refusal to break with  normality has clung.

Soon after Johnny, now attempting work full time, finds it nearly impossible to care for his dog, and arranges with Frank to take her each weekend to his house. This causes even further problems, particularly when Frank attempts to hold a party for friends on the day of a boating race. He sets up a bar in the living room, locking Evie safely away in the kitchen. But when one his guests, angered by the fact that he has locked away his pet, pulls open the door to inspect, havoc is let loose as Evie leaps forward, threatening the guests and destroying everything in sight.

Frank still loves the animal, however, and is willing to continue her weekend visits to his place. But upon arriving at the house one day discovers their young girl alone in the yard with Megan having locked her out and Johnny gone missing.

Frank finds his ex-lover in the local pub. Clearly the couple has had a row, probably about Evie, and now Johnny, who apparently is again out of a job, is willing to sell his prized pet. Frank gladly pays him, but he also recognizes that he now has only the symbol of the man he will never hold again.

Weeks pass, and we observe a now frailer Frank walking Evie through the park, the two, dog and master, quietly resting on a bench, when suddenly Evie begins to whine. When Frank looks up he sees Johnny standing there petting the dog. Johnny greets him and slowly moves back toward the baby carriage—which obviously now contains two infants—his wife, and his young daughter.

Calling back over his shoulder, Johnny quips: “I think you got the better part of the bargain.”

Perhaps. But only if you’re into to bestiality. Or, if the object of your lover’s affection—another than you—can truly fill your loneliness.

Posted by greenintegerblog at 10:38 AM