every day a little death

For a student film, shot as practice work by Doron Alon at Israel’s Camera Obscura School of Arts, Self Service is a surprisingly sophisticated short work of art.

Played out in a public open-to-the-street launderette, the set seems to suggest a kind of proscenium stage-like world in which you might never imagine the intimacy, on several levels, that the film plays out. But when Idan (Moshe Ben-Abad), a handsome young 20-year old Israeli arrives to toss his dirty clothes into the washer, events begin to happen that he could not have predicted.

Even his arrival awakens a young homeless teenager, who obviously uses the derelict laundry as a place to sleep and a kind of hang-out. The boy, Mike (Amit Zamir, who later played in Me and Everything I’m Not), rises to check out the newcomer, asking him if he can spare a shekel before sitting with seeming familiarity upon the washer into which Idan has just deposited his clothing. 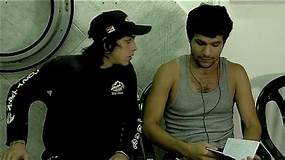 Idan, meanwhile, has retreated to a nearby chair to read a book, which also arouses the scruffy occupant’s interest, as he soon moves over to the companion chair on which Idan has deposited his backpack, tosses it to the floor, and sits down beside the apparent student. Mike asks what he’s reading—which Idan identifies as the Hebrew translation of Death in Venice—and cheekily asks if he might borrow it in order to read it himself. He eagerly promises to return it after he finishes.

Mildly amused by the boy’s interest, but also seriously considering the unexpected request, Idan asks how he might know where to retrieve the borrowed book. Mike assures him that he’s always at the lauderette or nearby, and further asks what the book’s about.

As Idan returns to his reading, the boy returns to his post on the washer, saying something to the effect, “On second thought, you finish the book but tell me how it ends.”

The absurdity of that statement clearly gives Idan pause. But the boy seems legitimately interested in the strange negotiation. Perhaps not even Idan quite perceives the irony of his reading a book about the elderly Gustav von Aschenbach sitting on a beach chair in observation of Tadzio, sexually lusting for the beautiful boy while realizing the impossibility of even speaking to him.

The hunky Idan is no decaying Dirk Bogarde and Mike is even less of a variant of Björn Andrésen, who the director of the film version, Luchino Visconti, described as the “most beautiful boy in the world.” Yet, suddenly Idan finds himself very much in the same role, staring at the appealing kid as a woman enters to remove her laundry from a washer, the two males almost smirking at one another during her brief procedure. 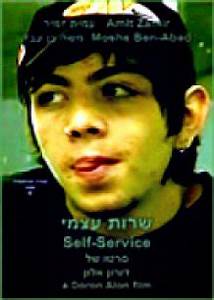 The boy slinks back to his bed-like bench, as Idan slowly begins to pack up his clean laundry in a kind of bemused wonderment that he has now, probably for the first time in his life, paid for sex. As a young, attractive man, he has clearly never before imagined the possibility. But now, without saying a word, his face expresses his recognition that he may become someone like Aschenbach sooner than he might expected.

Posted by greenintegerblog at 3:57 AM