no time for heroes

In this very first eight minute work from 1932, however, Bosko rides into the Wild West, having at moments to carry his exhausted horse, successfully making it to Red Gulch, a tough western town where, we’re told through a title-card, “men are men nine times out ten,” precisely the statistical percentage of homosexuals out of the total population.

Bosko is greeted with a shoot-out so intense that it cuts one tall lanky hound dog down to the size of a puppy. Bosko, himself puppy sized, finds bullet holes have turned his hat to a something that looks like Swiss Cheese. But once inside the bar, he’s greeted with a friendly-like hoot of “Howdy!”

Inside he finds a piano player accompanied by a banjo player and a fiddler performing a rendition of “She’ll Be Coming Round the Mountain” that is so very appealing the man in town cannot resist a tap dance. 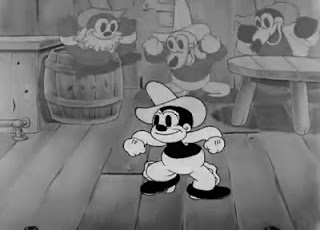 The piano player gives the end of the song such an emphatic flourish that a foamy mug of beer sitting on the edge the keyboard frame flies into the air, pouring its entire contents into his mouth. Clearly this hooch is hot lightning, setting his stomach on fire and burning away his pants to leave behind a tattered garment looking a bit like a pair of female bloomers. He, suddenly revealed to have mascaraed eyes with long batting eyebrows and lipstick-covered lips, acquires limp wrists and goes strutting off like a suddenly just “gone queer” queen. Evidently, he couldn’t hold his liquor.

Bosko ratchets up the piano stool and takes over the keyboard, shouting out “Hi boys,” before tickling the ivories so effectively that even two Kings, a Queen, and Joker in a poker deck jive in a chorus as the free-wheeling Deadwood barroom is filled with ambiguously gendered dancing couples. 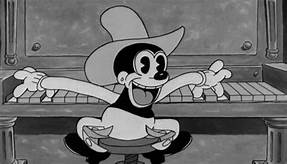 Meanwhile, the stage is also coming round the bend holding the soon-to-be new girl in town, Honey. Around the corner, however, are the villains waiting to rob the coach, which roars so quickly past their gun-slinging leader that he and is horse are twisted into a coiled lasso.

The driver, once the thorns are our pulled of his ass, seats himself on the skeletal remains of his steed and heaves himself into town to breathlessly report: “The stage is robbed!”

After a few futile attempts to leap upon the saddle, Bosko’s horse noses his way under his rider’s rump and they off to save the day, jumping huge boulders like caveletti. Honey screams out the window of the coach, and Bosko moves a few more frames forward as we suddenly perceive the camera panning away to reveal a small screen set upon a table, around which three men are grouped—director Hugh Harman, animator Friz Freleng, and producer Rudy Isling—watching their animated creation while adding sound effects. 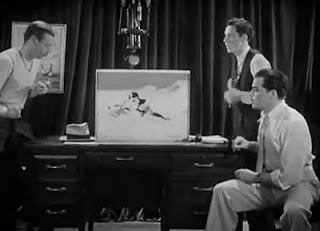 How are we going to get Bosko to save Honey, asks Isling? a question for which the other two apparently don’t have a answer. Well we have to do something, Isling insists. But Harman declares it’s late, time to go home, and three exit, leaving their very first creation without a chance of becoming the hero who might save the day. No he-men around, apparently, in this “looney” world to come to the rescue. “That’s All, Folks!”

Posted by greenintegerblog at 1:48 PM