boys will be girls

Produced in 1917 by the Famous Players Film Company-Lasky, the silent film The Amazons is now presumed as lost.

As described in a film magazine of the day: Because the parents are disappointed that their three children are girls instead of boys, they are brought up by the Marchioness of Castlejordan (Helen Robinson) as boys, no real males being allowed within the walls of the estate.

The three young boys (Marguerite Clark as Tommy, Elsie Lawson as Willie, and Helen Greene as Noel), however, become quickly known for their antics, upsetting the local villagers, and resulting in a great deal of gossip.

The youngest of the “boys,” Tommy, is sent to London to visit relatives.

There, she slips away from the house dressed as a gentleman in evening clothes and visits a dance hall. Encountering a bully at the affair, she knocks him out in self-defense. Escaping the dance hall she jumps into the cab of Lord Litterly (William Hinckley), who takes her home, a warm friendship quickly developing between the two of them.

Later, Litterly saves Tommy from a fall from a runaway horse. 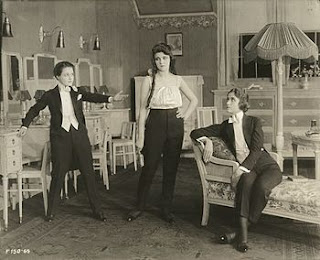 Meanwhile, Willie and Noel arrange a meeting, one evening, with two men in the gymnasium. For his part, Tommy, climbing through a skylight, literally “drops in” for a late night meeting with Litterly, who not only discovers his friend is a woman but that she is a relative.

When the Marchioness discovers the whereabouts of her missing charges, she recognizes that her boys will be girls, and gives them her blessing for a triple wedding.

Posted by greenintegerblog at 2:23 AM