two narcissi starring into a pool of metallic paint

Kenneth Anger’s 3.23 minute short from 1965, Kustom Kar Kommandos, is "camp" personified. Against the perfectly pink backdrop two handsome early 60s greasers, one in baby-blue jeans and shirt, the other all in white, lean over a custom-made car, starring into its glaringly shining surface and glistening engine parts as if, like two Narcissi, they were studying the beauty of their own faces more than the gears and pistons of the awesome machine before them. 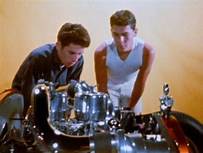 The boy in white suddenly disappears as if blueboy’s boyfriend had suddenly been displaced by the duties required in keep up this perfect machine. Perhaps the white buff that looks more like an angora sweater instead a cleaning chamois (or as my father used call it, “shammy,”) has replaced him. The boy in blue (Sandy Trent; did Anger himself bestow that so appropriate name upon the actor?),  moves so gently and carefully across the blindingly bright rust-red paint, meanwhile, that he appears almost terrified to even touch the engine of his creation. 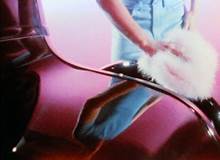 Anger here is obviously carrying the metaphor of the American automobile being an extension of its owner’s cock to the limits. In his forward leaning and bending ministrations, the languid act accompanied by the 1955 hit song “Dream Lover,” sung by The Paris Sisters—

Every night I hope and pray

A dream lover will come my way

A boy to hold in my arms

And know the magic of his charms

Because I want a boy to call my own

soda-fountain-sized seats with lust in his eyes. Clearly the lover of which dreams sits before him, reading to roar into the readiness to spin him away to paradise. 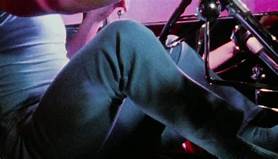 As if finally ready to submit he cautiously sits down in the driver’s seat, the camera following his extended legs and crotch with homoerotic pleasure as he jingles his lover’s gears in anticipation before the engine comes to growling roar and the film’s end. 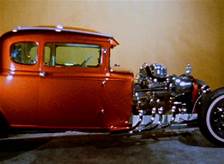 Obviously, it must mean something that this Kustom Kar looks as if, before its remarkable transformation, it had once been a hearse.

The Ford Foundation granted Anger $10,000 for the production of this film. But obviously he spent so much on the Kar and the technicolor lighting that he only had enough left for 3 minutes of what was to have been a feature-length film focusing on the role of cars as fetish objects among young American males. Yet, I can’t imagine that anything more might have been said, unless the boy in white were brought back just in time for two to embark upon a road trip.