the bride in the sky

Luiz de Barros (1893-1982) was one of the major Brazilian filmmakers of the silent era who  continued to work after the shift to sound, producing from 1914 to the late 1970s over 80 works of cinema. He was known for his complete control of nearly all aspects of his films.

His 1923 Augusto Anibal Quer Casar (Augusto Anibal Wants to Get Married) was the first film for the popular Brazilian singer Anibal who appeared as the central character in several of de Barros’ films in the 1920s, before he turned to singing roles only in the next decade. Over the years Anibal performed in 15 pictures. 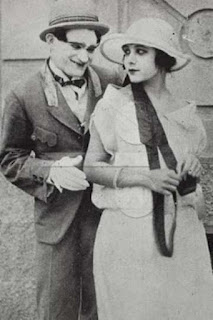 In his premiere work he played a character intent upon marrying a young woman named Yara Jordão, following her in his car before she slips away to join her other women friends. Noticing that she is now in the company the other beauties, he follows them to the Gávea beach, where he has an accident, throwing him from the car, resulting in a concussion. Suddenly he sees all of the female bathers as dancing nymphs and attempts to join them in their romps, evidently proposing to marry each of them.

When they return to the city, the girls decide to take revenge upon him for his seeming marriage “mania,” and they pay a transvestite named Darwin to pretend to marry him.

Once they are falsely “married,” Darwin escapes, while “her” still slightly brain-damaged husband Anibal speeds off to the sea, flying away in a seaplane in an attempt to find his bride in the sky.

I might add that the above represents the first English language description of the plot, which I translated from an obscure Portuguese-language source.

This now lost film is recognized as the first portrayal of an LGBTQ character in Brazilian cinema history.

Posted by greenintegerblog at 4:29 PM