Suddenly in the last years of the 1980s and throughout the early 1990s a substantial number of black filmmakers produced films sympathetic to the LGBTQ community. It was as if a curtain had suddenly been opened and out stepped amazing black directors such as Marlon Riggs, Cheryl Dunye, Julien Isaac, and Spike Lee, to name only a few.

Obviously, some of these figures didn’t just “step out” upon a stage waiting for their entry; many directors of color had to pound and push their way through closed doors. Nonetheless, their arrival brought fresh and new perspectives to LGBTQ cinema.

Among these new figures was Michael Mayson, who, if he was less interested in pursing the art house works of others, took the now standard gay tropes of “coming out,” and explored them through a lens that resulted in entirely new perspectives. 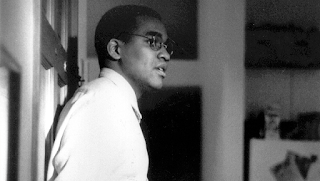 Billy Turner (Mark David Kennerly), the hero of Mayson’s 1991 short Billy Turner’s Secret, is no wide-eyed 17-year old, but a mature young man who shares an apartment with his life-long friend Rufus (played by Mayson) and Rufus’ Puerto Rican girlfriend Natasha (Khea Williams). As the film and theme song immediately establish, Billy has a secret that he has not shared with his roommates, he’s in a gay relationship with Gregory (Scott Evans), whom he meets, for the most part, on evenings spent away from the apartment. But on the one night at the center of this work, Natasha and Rufus are planning to attend a baseball game, and Billy determines to invite his lover over for a long-deserved evening at home.

Almost immediately, as the two life-long friends Billy and Rufus spar in their daily basketball meetup in a public lot, we realize why Billy has determined he’s not yet ready to tell the truth to his friend. Rufus is a misogynistic homophobe who seems unable to comprehend that the two forms of behavior are closely related, that his demeaning attitude toward women is tied up with his fear of sexual contact with men. Indeed, without perceiving it, Rufus is truly terrified of sex. “Women don’t want to be respected,” he justifies his constant cheating on Natasha, “They wanna be dogged” (for whites who have never ventured outside their suburban split-level castle, “dogged” means: “To be treated badly for no reason at all by someone who led you on to believe they actually cared about you.”). Moments later, when an effeminate acquaintance of Billy and Rufus, Skyler (Harrison White) stops by with a message from Natasha, Rufus asks: “You sure didn’t come by to look at our dicks?” And a few minutes tells him to get his “sissy ass out of here.”

So obnoxious is Rufus that we can well comprehend why Billy’s leery about telling the truth. Later, when Gregory almost convinces his lover that’s it time to free himself from his lie, Billy begins the attempt by explaining he has something sexual to reveal to his friend, Rufus’ homophobia so quickly jumps in that at the moment Billy is about to admit being gay, he backs out by saying that he’s dating a white woman.

That fact leads to a long ridiculously humorous tirade by Rufus who warms his friend about white women who, after being “punished” by black dick, can’t go back to their pencil-thin white boys which results in trouble and eventual arrest. From there on Rufus (Mayson delivering his own hilarious diatribe) goes on to express a series of homophobic/misogynistic rants that are so sadly funny that I just couldn’t resist sharing it:

So there we sit in jail. I’m sorry fellas, but if I’m in jail and them

have to kill him. Fuck that faggot shit. I will fuck a bucktoothed,

Billy, Gregory, and the audience alike are made speechless in consequence.

The problem is that Billy’s night with Gregory in his own bed ends disastrously when Natasha’s sister, Evelyn (Tanya Solar) shows up a half-day early and discovers the two in the middle of making love. A nasty woman in-the-know, she immediately blackmails Billy and Gregory into shopping for her immediate needs, which consist of hair spray, nail polish, nail polish remover, plantain chips, Spanish TV Guide, beer, Oreos, Captain Crunch, lotion, Lady Bick razor blades, and Maxi-pads. The next morning she accompanies Billy on a clothes-shopping spree, and before the next day is over wheedles an invite to a party Billy is attending that evening.

While Natasha, a student, is out studying in the college library, Evelyn convinces Rufus to join her at the party. We can see what’s coming—Mayson’s Sanford and Son-like comic devices are not all that subtle—but we delight in the inevitable show-down nonetheless.

The party that Billy is attending is gay, obviously, and Rufus is astounded by seeing so many “faggots” in one place. When he spots his friend there as well, he complains to him about the company he’s keeping. And finally when Billy comes out with the truth, his “life-long friend” turns on him as well with another of his crass assessments of gay sexuality.

The evening ends with Rufus being slugged by Billy, returning home in complete bewilderment to find Natasha and the “sissy ass” Skyler working on a student project on the computer, and a row which ends up with Rufus slugging Natasha and pushing her to the floor. It’s the age old syndrome: when a male is sexually threatened, he has to take it out on a woman, to his way of thinking, a weaker and inferior being compared with the glorious male identity he has concocted.

The night ends with a drunken Rufus sleeping in the apartment building hall among all his clothes Natasha has tossed out. Absurdly, at their regular basketball session, Rufus still expects his old “friend” Billy to do another favor for him: make it better between him and Natasha.

But this time he’s gone too far, and Billy refuses, another gay man arriving to once more thrash Rufus for his treatment of his girlfriend, Billy finally intervening just to beg the man to spare his ex-friend and further pain.

Alas, the film ends as a rather unbelievable parable about how to stop such idiots from abusing women and gay men: Rufus, evidently having learned his lesson, is forced to cook for and daily clean Billy’s room and makes it up with Natasha, boasting to his old friend that if anyone messes with him about being gay, he’ll have his back.

Given just how ineffectual and pointless Rufus’ claims have been throughout this comic work, I wouldn’t count on him as a gay protector nor, for that matter, as a man who might finally properly care for the woman he purports to love. Like the bigoted TV figure Archie Bunker, Rufus, we have to presume, is man who comes to his senses for one day only before he turns back into the fool he has always been.

Yet I enjoyed Mayson’s explorations of the possibility of educating all those woman-and-gay hating males who somehow imagine they are desirable lovers.

Connected with the “New Queer Cinema” group, I’d like to know what happened to Mayson and where his obvious talent took him.

Posted by greenintegerblog at 6:35 AM