Rose Benjamin (Eileen Atkins) is an editor, working throughout this film on what appears to be romance novel. Her son Philip (Angus Macfadyen) also works as an editor, although we do not see him engaged in his vocation but rather observe him mostly cuddled up in bed with his lover Elliot (Corey Parker) a mercurial American who appears torn between his love for and an inclination to break up with Philip. Rose’s husband and Philip’s father Owen (Brian Cox) is a successful academic, teaching at a university. Accordingly, the British Benjamin family, although not financially well off—indeed during the period when we enter their lives Rose and Owen are fearful of not being able to find an affordable new apartment, the owner having demanded the flat in they have been living for many years be vacated—they nonetheless seem to be a fairly comfortable and well-adjusted urban trio.

In US terms—the country wherein David Leavitt’s novel on which this film is based occurred—the Benjamins might be described as having achieved the American dream. To the outsider their home surely is a comfy expression of what appears to be their satisfaction with their lives.

Yet, as we soon discover, the Benjamins are a family unable to communicate their deep differences and pains, not just to the world, but more tragically, to themselves. Without actually knowing it, they each speak a slightly different but utterly incomprehensible language to one another. Philip lives with a female roommate, Jerene (Cathy Tyson) who is working on a PhD thesis that focuses on private languages, describing to Philip a pair of young twins who created a private language among themselves and another young boy, who left alone in his crib for most of his life, developed a language from his observation of the large working cranes outside his window. Hence this film’s title, The Language of Cranes, a secret way of expressing not unlike the way Rose, Owen, Philip, and perhaps even Elliot each speak languages that to the others appear to defy communication while openly living lives secreted from one another.

To give him credit, Philip is the first to try to break the unspoken taboo, declaring to Elliot that he is planning soon to visit his parents and tell them he is gay. It is not that he is closeted; all of his friends know that he is a homosexual; all, that is except Rose and Owen. He is also determined to fully express to Elliot his love and commitment to a permanent relationship.

The fact that Elliot—who has grown up as the adopted son of a noted queer author, Derek Moulthrop (John Schlesinger) and his partner Geoffrey (René Auberjonois)—still warns Philip about admitting his sexuality to his parents and soon after runs off to Paris, writing that he has found Philip’s love too demanding, should have given Philip some warning of just how difficult it is to describes one’s own identity to others. Yet, fortunately one might argue, Philip pulls open the living room drapes which we see Rose closing in a deep moment of isolation and confusion.

Hoping to become as honest with his family as he has been to everyone else, the son tells them of his sexuality and reveals how painful it has been over the years to reveal it to the people he most loves. One might think that in 1991, the year this film was released—presumably contemporaneous with the incidents in the film itself—that to such enlightened professionals that Philip, after a moment or two of dismay about having not been told before or simply not having been able to read the signs of his sexual preference, would be greeted with open arms. Yet Rose particularly is angered by the news. Like many a mother, she begs him for some time before she can come terms with what he has told her. More telling is her response to his explanation that “everybody knows it, except you.” “We all have our secrets,” she declares. “I’m not sure they ought to be revealed.”

“It’s better,” Philip insists, echoing what anybody in his position or what any open-minded individual might argue.

“Better for whom,” she snaps.

Even at a later point in the drama, Rose seems still almost bitter about the revelation. And given her first response, we now see her in a different light, as a woman who herself has been holding deep secrets inside, not only about her own affair which we realize was a temporary fling with another married man, the couple’s friend, but out of her own resentment for her husband’s inattention and her doubts about his fidelity. These reactions give a dimension to Rose that Atkins quite brilliantly embodies in her character’s private struggle with inexplicable ghosts and her own slow attempt at translation of the secret language used by her husband.

Owen at first seems more accepting of his son, but strangely remains silent as a tear drops from his eye and, soon after Philip leaves, he bursts into a seemingly endless crying jab, requiring that Rose not only deal with her own emotional responses, but to comfort her inconsolable husband.

What we already know by this point in the story is that Owen is not crying for Philip as much as he is crying over his own lost life, his life-long resistance to admitting about himself what his son has just been brave enough to express. 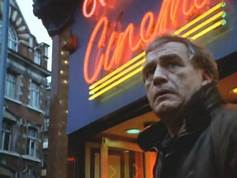 Suddenly, it appears, no one in this previously “ordinary” middle-class family is happy; and we realize none of them live in a manner that the majority hetero-normative society would deign to describe as “normal.”

Encountering a good-looking new faculty member, Winston (Nigel Whitmey) Owen invites him to their home for dinner, ostensibly—so he tells his son on dinner meeting where he also pumps Philip on how to recognize whether someone is gay or not—as a possible companion for his son. But at the family dinner itself it quickly becomes clear to Rose that real reason why Winston has been invited to enjoy her lasagna is because Owen is attracted to him. Throughout the scene Rose remains stolidly quiet as director Nigel Finch’s camera focuses in on a suddenly loquacious Owen describing the joys of Greece and Italy to his would-be lover.

His apparent attempt to seduce the younger man is, indeed, as Rose later tells him, embarrassing, particularly since the attractive American is quite obviously straight, as Philip confirms when he reports to his new boyfriend that all the young professor could talk about as he drove him home was his girlfriend.

In the quiet aftermath of Owen’s performance, his wife confronts him about his sexual interest in men, to which, at last, her husband admits he was attempted sublimate throughout most of their marriage. The New York Times television critic John J. O'Connor nicely summarizes their intense encounter:

“While Owen and Philip grapple with the meaning of it all, clear-eyed Rose survives with tenacious dignity. ‘How many times have I looked the other way,’ she asks whimpering Owen, "drawing ridiculous conclusions." Still another superb performance from Miss Atkins (A Room of One's Own) makes Rose a far more defined character than she is in the novel. She commands our attention and sympathy. ‘Think of me for once,’ she tells her husband. ‘My life's like the punch line of some stupid joke.’"

For Rose, Owen’s admission is suddenly a kind Rosetta Stone that lines up a lifetime series of inexplicable actions, allowing suddenly for a translation from a uknown language she only now can read.

Through Philip’s honest “coming out,” the Benjamins’ lives have been changed forever, but at least they have the consolation that in the remaining years they might find fuller meaning while living out their true identities.

The uncensored film is available on Region 1 DVD in the US, and on Region 2 DVD in The Netherlands. Despite its being a BBC production, it has not been released on DVD in the United Kingdom even though it has been scheduled for release several times before being postponed indefinitely.

As I have written elsewhere in these pages, Howard and I met one another and became a gay couple openly living together in 1970. The idea that almost 30 years after Warhol’s raunchy gay videos, that 20 years since such significant films as Visconti’s The Damned, Fellini’s Satyricon, and even, in the US, Friedkin’s The Boys in the Band that audiences still could not tolerate the open presentation of gay life seems almost incomprehensible, as meaningless to many of us as the language of homophobic hysteria.

One must recall, however, in 1992 even seemingly sophisticated audiences were still reeling from the news of AIDS—absurdly described as the “gay” disease—and that very year a second wave of films about AIDS were making their way to theaters. My editorial assistant, Pablo Capra, who came of age in those same years, describes them as representing the most virulent anti-gay attitudes imaginable—although I most certainly might point to other periods such as the early 1960s, an even more powerfully homophobic era, in my view, than the notorious re-bating 50s.

I am well aware that there still many TV viewers today who would, like Rose, prefer not to have such “secrets” revealed. Sorry folks, the very book you have in your hands testifies to the fact that there are simply no more secrets to be told. Anyone today who doesn’t know about the lives of LGBTQ people is intentionally placing their hands over their eyes, ears, and nose while reaching out to cover my mouth like one of the many-armed angry Indian gods.


Posted by greenintegerblog at 1:53 PM