who is who and what is what

Norah Blaney was a popular British music hall singer and pianist, who often performed with her lesbian lover, Gwen Farrar, who played the cello while producing vocal and instrumental sounds that were described at the time as “weird” and “masculine.”

The two met working as World War I entertainers for Lena Ashwell’s concert parties, which toured behind the lines in Northern France. The two had an on-stage relationship, which, defying convention, were filled with innuendo-laden queer interpretations of popular heterosexual hit songs. 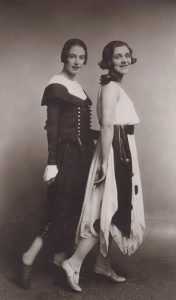 They lived together for many years in Effingham, Surrey, sharing friendships with Radclyffe Hall, Joe Carstairs and their circle. Farrar died in 1944, in her later years was rumored to be romantically linked to actress Tallulah Bankhead when the American was living in London. Blaney lived until 1983.

Their lives together became the subject of a 2014 play All the Nice Girls, created by lesbian partners Alison Child and Rosie Wakley in order to feature lesbians on stage and tell their stories. The play has since been performed throughout the United Kingdom in theaters, community halls, pubs, and care homes.

This short one minute and eight second film from 1932 film with no director listed, captures Blaney at the piano and later standing singing, with a background orchestra, James V. Monaco’s ditty with lyrics by Edgar Leslie from 1925, the comic gender-bending “Masculine Women! Feminine Men!” 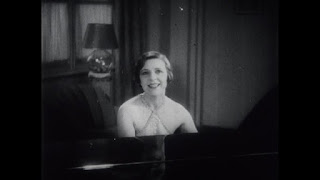 Given the importance of its lyrics to Blaney’s performance, I’ve reproduced the complete version below, although Blaney makes some omissions and minor changes.

You'll say they're bugs* when you look at the clothes they wear.

Sister is busy learning to shave,

Girls were girls and boys were boys when I was a tot,

Now we don't know who is who or even what’s what.

Knickers and trousers, baggy and wide,

Nobody knows who's walking inside.

Auntie is smoking, rolling her own,

You go and give your girl a kiss in the hall,

But instead you find you're kissing her brother Paul.

Mama's got a sweater up to her chin,

Papa's got a girtle [sic] holding him in.

Stop, Look, Listen and you'll agree... with me.

Things are not what they used to be. you'll see.

You say hello to Uncle Joe,

Then look again and you find it's your Aunti Flo.

This song was originally posted on protestsonglyrics.net

Wifey is playing billiards and pool,

Hubby is dressing kiddies for school.

Ever since the Prince of Wales in dresses was seen,

What does he intend to be the King or the Queen?

Posted by greenintegerblog at 5:17 AM