cuddling with a corpse

Although  We Were One Man is in the fact the literal translation of Philippe Vallois’ amazing 1979 film Nous étions un seul homme, it feels like there is something missing in the English language translation. The title in French sounds to me like a possible war-time phrase, suggesting the French fought as one person, as one man, the nation working together as a single unit to rid themselves of the Germans.

None of this is suggested in the English language translation, which, contrarily, makes the film sound like it might be something closer to German transgender Charlotte von Mahlsdorf’s 1992 autobiography, later adapted by Doug Wright as the play I Am My Own Wife. Mahlsdorf survived by being true to her gender identification, hiding from the Nazi’s in full sight by living as a woman.

Yet given the context of Vallois’ film—in which a slightly crazed French peasant, living alone outside a small village in an abandoned farmhouse, discovers a German soldier who has been wounded, drags him home and nurses him to health—such wartime jargon, if it existed, is terribly important. Although that French fool, Guy Rouveron (Serge Avedikian) eventually develops a deep mutual relationship of love with the Nazi soldier, Rolf (Piotr Stanislas), the title is not simply celebrating their eventual sexual entwining, but strangely argues that they too rose up as a single force, French and German, to fight for the freedom to express not only their sexual desires but their personal oddities and obsessions. Their war is a highly personal one that must be fought out between the two of them with little support of the beings surrounding them.

Indeed it is the oddity of Vallois’ couple that makes his film so very memorable. By all regards you might never imagine an odder couple (even Neil Simon’s Felix Unger and Oscar Madison had more in common). A former young Hitlerjugend Rolf, as a handsome blonde, muscular, statuesque, blue-eyed beauty, looks the part. He daily exercises, takes in the pleasures of nature, and walks a stray dog he has found and trained. Even he admits that throughout most of his life he has been a been educated in how to think and behave without ever questioning the values which have gone into his becoming a perfect Nazi killing machine. Rolf is rational, logical. and strong, despite the taunts of his new French acquaintance Guy, who insists that he is stronger. The only thing that seems to be missing is his gun, a weapon that Guy has instinctually taken from him and hidden away in the rafters of the old farmhouse. 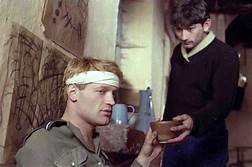 Guy surprisingly—given his almost gaunt, runt-like stature and a body that is constantly leaning forward in potential motion—is the stronger of the two, at least in his willfulness regarding Rolf. And it is the mad insistence of his own reality that keeps Rolf from simply leaving and returning to his military unit in the front. Moreover, as I have hinted in words such as “crazed” and “mad,” Guy is anything but logical; in fact, there is good evidence by the end of the film that he is truly insane, formerly locked away in an asylum which, when the Germans arrived, the staff abandoned, leaving their patients to their own destinies.

Madness, of course, is a relative thing, particularly in times of war (as our world’s recent year-long quarantine due to Covid pandemic has revealed); and Guy, at times, seems as rational or perhaps reversely as crazed as those around him in the nearby village. Many of the women, including the local prostitute and the love-starved young woman of this tale, Jenine (Catherine Albin)—both of whom have given their bodies willingly to Guy, whom some describe as the town idiot—are punished by the violent males, severely in the prostitute’s case, for their offers of pleasure to the enemies of normalcy: the Germans, the morally degenerate, and in Guy’s case, the mad. At moments one has to wonder whether the determined punishments of such minor crimes are not madder than the acts of the outsiders they fear. But being occupied in War allows them few other opportunities for serious contemplation. 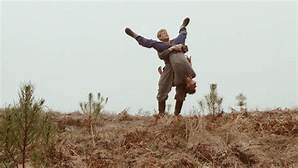 With his new friend, Guy now begins to clumsily commit to daily work-outs, nature walks, and other activities which he has never imagined. For his part, he offers Rolf the ability to work by sawing down trees for heating tinder and to participate in other farm chores.

Guy also is considered as a kind of naïf artist, some of his artwork pasted to the farmhouse wall; when he discovers Rolf looking at photographs of his own family members, Guy immediately gives them a place of honor on a narrow ledge serving the equivalent of a mantelpiece. Later, Guy even makes the terribly bold move of bringing his bed into the same room where Rolf sleeps, just to enable, as he explains, their fondly regarded conversations. 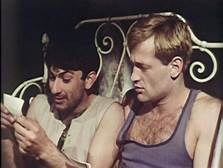 The several long scenes of their almost comic workouts and treks through nature evoke a sense in Vallois’ film of the many similar arcadian and often comical passages in François Truffaut’s Jules et Jim (1962). This film owes a large debt to Truffaut’s movie, including Guy’s later attempts to offer up one of his weekly visits to Jenine to Rolf.

But Rolf, previously unused to thinking, has increasingly been curious about things he is discovering about himself, including his growing attraction to the impetuous, constantly-in-motion, Guy. And Jenine, herself, observing during her regular deliveries of food and wine to the couple, the near bucolic world in the two now live, plots a way to bring them closer.

As Rolf gradually begins to identify his love for Guy, tensions arise, mostly because of Guy’s inability to assimilate himself to the world in which he actually lives and his confusion arising from being molded by what the society around him deems as normal behavior. In many respects he is like Rolf before arriving in the brave new world in which the German now discovers himself.

Accordingly, when Rolf attempts to translate their ruff-housing hugs into an actual kiss, Guy suddenly pulls away, confusing and angering Rolf who completely breaks off what he has now presumed was a developing romance.

Disappearing, like the camouflage uniform he keeps trying to recreate, Rolf literarily moves off, returning to nature, and even hiding himself within it—much to the anger of the even more clueless Guy. Guy now only gets momentary glimpses of his friend, as if seeing him through the lens of a surreal-like kaleidoscope.

Their separation leads to a violence one would never expected of the innocent Guy, who threatens his only friend with a knife and ultimately kills Rolf’s beloved pet dog. Nonetheless, it is clear that Rolf has now become the stronger, physically, mentally, and most importantly, emotionally. 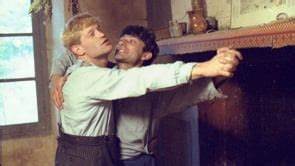 When the two finally reunite, sharing in a large drunken meal provided by the window-spying Jenine, something finally begins to click in Guy’s hazy sense of self. When he announces that he is about to make his weekly visit to his girlfriend, Rolf begs him to stay, finally confronting him with Guy’s lie that before coming to live in the isolated farm he was living in Niagara Falls in the US—almost a Freudian choice of location, one might argue, given its association with love and marriage—the two finally breaking through the barriers that have been preventing them from their desires. Suddenly they ecstatically come together through sex in a manner that clearly they—and, at this late time in the script, we—might never have imagined.

As the two lie together satiated by their lust, the peeping-tom Jenine joins them, as if to assert her role in working to unite the two against the outside forces they face. She is not seeking to join them in sex but simply to receive their embrace for giving them a helping hand.

Yet even though the Allies are nearing this still Nazi-held region, the forces demanding regimented behavior still occupy the territory as Jenine’s father and a local partisan leader, who have suddenly become aware of Rolf’s existence in their territory and of his attachment to Guy, break in to find them in a symbolically conjugal bed.

Jenine is sent home for later punishment, Guy left behind in recognition of his innocent idiocy, while Rolf is taken away with the intention of a painful cross-examination and execution. For perhaps the first time in his life, Guy moves quickly with conscious intent, retrieving Rolf’s hidden pistol and following Rolf and the local tribunal members.

Scaring them away with a wild shot, Guy now carefully aims and shoots his lover in the heart, proving once again Chekhov’s maxim that if you show a gun in the first act of a play who have to use in the last.

His assassination of Rolf is obviously more humane than what the others had planned for him, and by killing his friend he can now also claim the body, taking it back home with him to bury it in an earthen hideaway that Rolf had dug out when he buried his dog.

Guy carefully places the body into the branch-and-leaf-covered dugout and crawls in with it, cuddling up the Rolf’s corpse. Now no one can ever take away his beloved other, as the two have literally been transformed into one.

If this seemingly bizarre, slightly necrophiliac act seems a strange way to end this stunningly original work of cinema, it’s the only way it could have properly been concluded. For Guy’s act is now a true act of madness that totally sacrifices the body to the heart in a way that, perhaps, not even a military act of bravery can express one’s commitment and love to family and country.*

*This reminds me a little of the central image that the great creator of monstrous visions, James Whale recounts through the character portraying him in Gods and Monsters (1998) when his World War I lover was shot and killed just outside the trench where Whale was trapped, forcing him for days to stare out at the body impaled upon a protective wire fence. If only he might have been able to retrieve that body, bring it into his trench and sleep with it in his arms for a night perhaps Whale would not have been haunted with horrific images for the rest of his life.