the hookers and the good looker

When several denizens of the Los Angeles gay bar The Brownstone got together to make a film, in a sense they also made movie history. I can’t think of a group effort in filmmaking that grew out of a regular Sunday brunch. But that’s what happened when the G. G. R. C. (“Gay Gays Ready to Cum”?) boys, the producing acronym of the 1962 film Always on Sunday decided to make a nine-minute movie in their backyard, so to speak. Begin with an absolutely ridiculous studio logo, in this case a drag Miss Liberty who quickly throws away her torch and goes stumblingly drunk out of her oval encasement; separate the participants into the hunky boys and those ready and willing to play the female figures in drag; assign everyone a campy screen name (Melina Hoover as Ilya, Sauroka Silva as Taki, with Patti Paris, Gladys Cooper, Mable Meland, Michele Cavendar, and Loretta as the Girls, and Kouros Kendzy and Corfu Crews as the Sailors, Furi Cote as the Bartender, along with the entire G.G.R.C. stock company of famous players) and you’ve got a cast to die for. Put Hattie on Sound, get Lotta Head to do the gowns, and let that bossy Connie B. De Mille direct and Hollywood can just drop dead of envy. 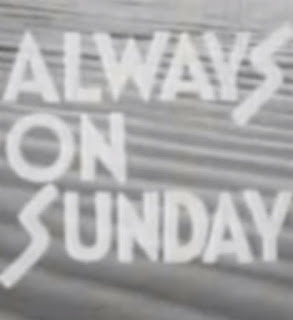 Obviously, there were enough Greek boys in their midst to sway the others to do a parody of the hit film from two years earlier, Jules Dassin’s Never on Sunday where Ilya (Melina Mercouri), the prostitute haunting the bars of the port of Pireaus falls hard for the American tourist Homer who attempts to steer her back on the course of morality. In this case he’s just another very handsome Greek boy (based perhaps on Never on Sunday’s Tonio) ready to fall for the wiles of Ilya until....I’ll get to that in a moment.

The film’s retinue of hookers march into port to offer up their services as represented behind the original film’s title, only this time we witness them only from the waist down in order not to spoil the fun of soon discovering above their shapely gams sit their outrageously ugly drag-queen mugs topped with wigs that Lotta must have dredged up from some Melrose Avenue costume shop. After an intertitle “Fleshy Thighs and Lonely Guys,” we meet the lonely guys, all rather cute gay boys melancholically lounging around the bar with beers and cordials of grappa in hand. The bar door opens and in stroll of the frightful foursome, standing for a few moments in various gestures of posing before immediately proceeding to pick out their targets, Taki, the tallest of the group, heading straight for the hirsute chested Greek boy who finally tells her (via title card) “Cool it kiddo, Ilya is the only one for me.”

In the comes that haughty beauty Ilya, her lovely topped in a blonde mop that clearly tickles the eyes of all the boys who blink and droop their cigarettes hitherto held tightly in their lips. Although Taki still has her arms around our male hero, Ilya knows how to get his attention, marching directly over to the juke box to put on a bouzouki accompanied piece moving into the position, arms held out in an L-shape as she readies to dance the traditional Greek Zeibekiko, instead of the linked-armed Sirtaki created for that other Greek flick hit of the day, Zorba the Greek.

Within minutes the handsome Greek boy pushes away Tati and moves to the dance floor to spin around the titillating fanny-waving Ilya, as romantically in love as any couple can get. He grabs a small table, kneeling there it as she spins round him, finally reaching up to strip open his shirt to bare a truly formidably buff torso for which, had I been older than 15 on that day, I surely would fought off Ilya to possess. 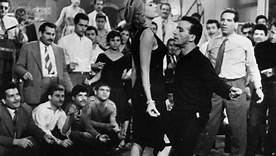 In fact, before I can finish writing this sentence the girls fly into a rage, pushing and pulling one another’s hair and derrieres in a full out brawl, apparently in response to the fact that their boyfriends applauded Ilya and the Greek boy’s dance with their eyes posted as much on their male friend as upon Ilya’s lithe shimmies to the floor.

But never fear, the navy’s on its way to save the day. Two strapping sailor boys swing open the door, as Ilya rises from her misery to greet the fleet. Standing against a wall and batting her eyes as fast as she possible, within a blink of an eye the sailors spot our Greek Apollo, move directly over to him, and hand him a few dollars which he happily tucks into his pants and, joining arms with his newfound mates, sashays out.

Ilya declares “Those Greeks are all alike,” and turns back to the others as they all join in a grand circle dance.

Does it matter that as the Greek and his sailors walk past The Brownstone parking lot we observe that the navy’s finest are both wearing woman’s dancing heels?

If all of this is truly silly, it nonetheless reveals that when Hollywood was telling us that homosexual men were slitting their wrists and pouring poison down their throats simply at the thought of being discovered as having visited a gay bar (see my discussion of Advise and Consent above), these men loved their bar and lives so much they determined to create a picture of their having fun by laughing at themselves.

Touché. I only wish they’d signed their real names to this joyous satire.

Posted by greenintegerblog at 6:54 AM