Ron Rice was one of the most influential experimental filmmakers in the 1960s. He made only six films in his short life of 29 years: a fragmentary work titled The Mexican Footage (1950); The Flower Thief (1960), perhaps his best known and most influential work; The Dancing Master (1961), an unfinished project he collaboratively worked on with his friend Jerry Jofen; Senseless (1962); Queen of Sheba Meets the Atom Man (1963); Chumlum (1964).

Rice died soon after his last work in Acapulco, Mexico of bronchial pneumonia and, as one commentator Wheeler Winston Dixon put it, of “his excessive lifestyle, and his insistence on putting the cost of film production before all other considerations (food, rent, and other more  mundane expenses), [all of which] seemingly assured his early death from spectacular, performative self-neglect.”

He later came to be seen as a major figure of the New American Cinema, even if today he is basically forgotten, paving the way for numerous later filmmakers such as the Kuchar brothers.

His last work Chumlum is the first I viewed. 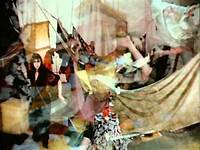 While working with filmmaker Jack Smith on Normal Love Rice became fascinated with Smith’s closet of costumes and pieces of set which littered the closets at the back of his apartment to where the cast retreated during breaks. Some of it was shot, evidently, during the lulls during the filming of Smith’s work.

“ Jack Smith—creature on fire, ruler of lost Atlantis, and author of the bite-sized encomium to the ‘perfect filmic appositeness’ of Maria Montez...—looms before us in a column of late afternoon loft-light, head swaddled in toilet paper, face swallowed by fur. All of yesterday’s parties seem to have exploded in the air around him. Walls waft away into scarves, ceilings fester and drip with balloons, somnolent freaks fill a hammock, then two hammocks, then the frame itself, superimposed upon one another like gaily-painted ghouls rummaging through piles of von Sternberg’s old fishnets.” 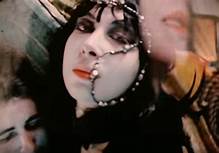 Yet Chumlum, in its 26 minutes, is so much more. Featuring a cast of Smith (in an Arabian  costume with a fake mustache, smoking hashish), Mario Montez, Joel Markman, Francis Francine,  Guy Henson, Barry Titus, Zelda Nelson, and Gerard Malanga, the film creates a mini-technicolor epic of and about exotica, with its figures mostly posing in positions of sexual enticement, ready if one’s willing to join them to take the viewer on a magic carpet ride, inviting him or her into a harem of drag queen belly dancers, to nab a ride down the Nile with Cleopatra, to sneak into one or several of Scheherazade’s thousand and one nights or even, at one point, entice a guard from the Roman Legion into bed.

Through the superimposition of the parts of these beings slowly swinging in hammocks or simply sprawling out on the floor like so many odalisques, arms come out of nowhere pulling the figures into each other, legs intertwine with torsos, and heads bend deeply into voluptuous kisses that together create a kind of frenetic sexual dance. At one point these formerly supine beings even  traipse out into nature like so many dancing sprites, springing through an arcadian paradise to squeeze their mass of squirming, writhing, and embracing bodies into a small log cabin for what can be described as an orgy of intense confinement, a bit like the clowns one used to witness in the circus who endlessly spill in and out of a toy-sized auto. 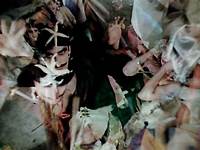 If Smith’s groundbreaking Flaming Creatures—made the previous year, a work to which Rice’s film is obviously devoted—is a queer experimental tribute to all the Cecille DeMille-like black-and-white epics that Hollywood produced, Rice’s work appears to mock all the full color biblical and classical spectacles that the studios conjured up since the first silent heroines and heroes coughed themselves into the talkies, with Angus MacLise’s score serving as the hundreds of voices silenced in awe to the eternally uplifting refrains of their Miklós Rózsa-inspired movie music. Again, Chuck Stephens has described it perfectly:

“As it [the film] opens, someone seems to be frying ball-bearings in a velvet pan on the soundtrack: it’s future (and fleeting) Velvet Underground drummer Angus MacLise, assisted by recording engineer/minimalist-instrumentalist Tony Conrad, coaxing hypnotic shimmers from a hammered cimbalom. This roiling, panging sound seems immediately to trick time into vanishing: moments into the movie, we surrender to its synesthetic translucences, sounds within sounds, sight upon sights, no longer remembering when any of this began.” 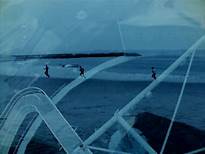 By film’s end we are ready, like the drag wedding bride Chumlum exhibits, to escape for a honeymoon running with the other boys along an open beach or even take in the terrifyingly phallic Pendulum Ride of Magic Mountain’s Six Flags—the images that close down Rice’s Indio-Turkish-Latin-inspired chinoiserie of cinema.