a riff on the band

One might almost describe Stan LoPresto’s 1970 film Sticks and Stones as “a riff on the band,” so influenced it seems to have been by Mart Crowley’s play of the previous year.

If possible, however, LoPresto’s work represents an even more stereotyped LGBTQ group gathering on Fire Island to celebrate the 4th of July. Here we truly get a near complete technicolor replication of the Rainbow coalition, including a lesbian couple, several leather-bound gays (some of whom, along with one of the lesbians, appear to also be bisexual), a group a gay men, a young man who somehow hooked up with one of the leather “queens” who is not at all sure that he wants to be involved in such wild behavior the evening promises, and an apparently heterosexual singer who stays on to see what might happen. No transsexuals are in attendance, but a couple of the hosts’ cross-dressing friends might be heading in that direction.

Before I go any further I should make clear that this film, with a screenplay by Tom O’Keefe, is one of the worst movies I have ever seen, the narrative consisting mostly of a very lame string of gay and lesbian put-downs of one another—these characters, played by actors (including Jessie Deane, Jimmy Foster, and Kim Pope) are not even assigned their on-screen names in the early credits, being evidently unable to mutter anything that might suggest clever repartee. Their guru (Robert Chase), described as the last of the flower children, spends the entire evening spouting a series of psycho-babble sermons while stroking the thigh of a young boy (Danny Landau) he has brought along. The fact that several of these figures gather round him to listen and to attempt occasionally even to enter into conversation gives some hint of the level of their intelligence. 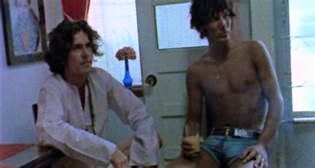 Mostly, this work reminded me of just how these endless attacks on one another in such gay gatherings of that period resulted in the total opposite of what the word, “gay” meant previous to its homosexual adoption. And sadly, the group’s campy put-downs of one another represent yet another reminder of the hostility the world all of these LGBTQ figures faced outside of their nightly retreats. Early on, the young neophyte reacts to such conversations by expressing his fears that his new “friends” are all arguing with each other. They immediately look askance, as if clueless about his definition of what they perceive as merely a kind a game. Unfortunately, Noel Cowards they’re not.

The songs, strip-teases, and mock rapes that follow as the evening progresses might remind one a little—a very little—of the behavior of Federico Fellini’s intellectuals, journalists, and starlets of La Dolce Vita whose partying seems equally meaningless and unfulfilling. I might describe this roughly-conceived film as almost a documentation of the banality of love—and sex for that matter.

The gay hosts, Peter (Craig Dudley) and Buddy (J. Will Deane) it is clear from the very first scene, are undergoing a gradual meltdown of a relationship that, to the audience certainly, is a bit incomprehensible throughout, particularly given that one is a British-born investment broker working on Wall Street and the other a failed playwright who spends most evenings in other friend’s Island cottages getting drunk.

But the last scene—as badly acted and as melodramatically conceived as it is—is somewhat painful and touching in the manner of the end of Albee’s Who’s Afraid of Virginia Woolf? Having finally gotten rid of their dreadful guests and now surrounded by the chaos of leftover food-covered plates, liquor, and beer bottles, the more uptight financier insists that his already highly inebriated companion consume yet more alcohol before wrestling him to the floor while asking if, after all his partner has been through that evening, there is still any love left for him. The exhausted would-be playwright writhes under the body of his mocking lover, unable not only to respond vocally, but now finally unable to flex the lithe body which he earlier revealed to all through a full-Monty striptease. Certainly, if you are to believe in any part of this futile exercise in filmmaking—which the flower child sermonizer describes as the same as another way of describing a dream—love may be more fulfilling between a man and a woman.

For these two, at least, the realization of the banality of their love and sex has come crashing down upon them as they finally must recognize themselves as being like another pair of Crowley’s losers.

I think the DVD’s back cover of the release by Something Weird Video rather cattily summed up the movie:

“PETER AND BUDDY ARE THROWING A 4TH OF JULY FIRE ISLAND PARTY AND YOU’RE ALL INVITED! Leather-Queen George will be there, bragging about his rubber bed sheets. So will The Lavender Guru, a loquacious flower child incessantly babbling hippie-speak. Bobby, who’s “new to this whole thing,” will be having a panic attack and Bike-Boy Fernando will be showing off his new Prince Albert. Yet despite Peter and Buddy’s relationship disintegrating right before our eyes, the party will be a smashing success—especially their inevitable end-of-the-romance tussle on the floor.”

Reprinted from My Queer Cinema and World Cinema Review (March 2021)

Posted by greenintegerblog at 10:57 AM