Based on the long-running daily radio show which rant from 1932-1942, the film Myrt and Marge (1933), directed by Al Boasberg, is a rag-tag revue with comedic skits interspersed among singing and hoofing acts all threaded together in a silly “hey, kids, let’s get together and produce a play”-plot that might make Andy Hardy go slouching off with embarrassment. When the current  producer and his partner of the supposedly Broadway-bound My Ladies’ Legs go bankrupt, the cast along with the “rude mechanicals” who haul and operate the scenery and props all join up with Myrt Spear (Myrtle Vail) who takes over as manager to recharge this stalled theatrical vehicle. After all they’ve all got plenty of talented performers—themselves—and, when Myrt drops out, adding a new comedian/dancer Eddie Hanley (Eddie Foy, Jr.) and his small-town sweetheart Marge Minster (Donna Damerel), and eventually finding a wealthy angel, Jackson (Thomas E. Jackson), what can go wrong? 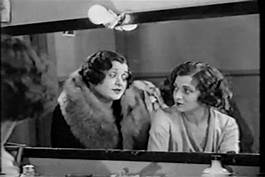 In this case, almost everything. For one, the dancing chorus girls in this movie make Ruby Keeler seem like a fairy-light ballerina; their hard pounding taps should bring the house down even if the applause of the small audiences they attract wouldn’t be able to drown out the sound of dropping hair pin.

Foy, who later in his career would reveal his significant talent (his performances of “It’s a Simply System” in Bells Are Ringing and “I’ll Never Be Jealous Again” in The Pajama Game represent two of the greatest topical comic songs in film musical history), is here a fairly gifted dancer in bad need of a good choreographer. But the jokes radio-and-screen-writer Beatrice Banyard hands him only demonstrate his roots as a vaudevillian ham. It’s hard to be convinced of his character’s love for Marge when it is so evident that he holds himself in far greater esteem. When he crawls into Marge’s bed late in the story to deter the Angel’s determination to receive some amorous pleasures as payback for his investments, you kind of wish that he’d held off and let the backer get in a couple of smooches before he slugged him in the kisser. But this heavy-footed and heavy-handed film squelches almost of the fun with the old-fashioned slug-fest played out in the dark, with no time for a little gay sexual insinuation.

Minster has a nice, slight, crackle of an amateur voice but her dancing is a mix of gymnastics and contortionism. And for utterly no earthly reason except for the film’s Deus ex machina—when she suddenly takes over the role of the show’s angel—Marge’s heavy set mother (Trixie Friganza) trots along with the company to make sure no one might touch her baby still clinging to her more than ample bosom. 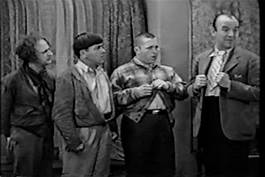 The heavy lifting backstage crew is the corny, punchy, and slap-happy Larry, Moe, and Curly—better known as The Three Stooges—overseen by the slightly more talented Mullins (Ted Healy), who soon after this film the comic group ditched—alas. The temporary fourth stooge, Bonnie Bonnell (Sue, whose friends call her Suzannah for short), with her Gracie Allen-like comic logic, fortunately shows up each day as a backstage crasher with a new contract written out on a laundry list. I must admit that I have never comprehended why the violent trio who seem to have found the shreds of all the jokes the Marx Brothers ripped up in disgust, appealed to anyone but fourth-grade bullies. But here, with Healy, they do actually sit down for a moment, pick up a fiddle, and pluck out a tune on the piano that is momentarily rather sweet.

There is a little jab at possible racist Asian humor when the company dines at a local Chop Suey joint, but luckily they either forgot the punch-line or immediately lost interest in the skit. There is  a rather loony and almost raunchy grand finale where the entire female chorus-line circle round the coils of a gigantic cobra, where at one point the camera goes zooming down a double row of the dancer’s spread-open crotches just before the snake grabs the princess in his teeth. And there is a lovely little ditty titled “Draggin’ My Heels Around” with Foy dressed up, without explanation, with a pair of outsized white gloves as a bowtie. But otherwise these ladies’ legs are need of some heavy shaving. 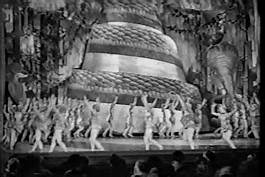 But then heaven does sometimes deliver up lovely strangelings in her storks’ beaks. For the pansy-player of this creation is born into the script not only for a line or two, but serves as the stage manager and hangs out with the entire team until the end. Beloved by both his fellow thespians and the script, Clarence (Ray Hedge) dishes out catty comments and comebacks to several members of the cast. In the film’s very first scene as he gathers up the chorus girls’ costume accessories into a trunk, he notes by the tired look on the face of one girl that she’s been out late the night before with a lover, accessing the situation as being “catch as catch can.” The cheap perfume of a second girl smells to him “like a goat.” Turning to his assistant he observes, “If we could get the run on this show I could make the second payment for my kimono.” A third chorus girl hands him her boa saying, “Put that in the trunk and don’t wear it.” He hisses back, “Selfish!” Later, when yet another of the chorus beauties shows up with a pair of net stockings which, she insists, have just a little a rip, he, inspecting it more carefully, declares: “A rip? My dear, it looks like King Kong going to a masquerade.”

A moment later the producer Grady shows up to tell the suddenly gathered cast the worst news first (he and his partner are bankrupt). As he begins “You know how much I love you all,” Clarence snipping back, “That’s the worst!”

“My partner and I are insolvent,” announces Grady.

“Well, we can’t all be happy,” Clarence quips.

While his lines alone may not be terribly funny, his character is, and we can’t wait to hear what might come out of his mouth whenever he’s around (not enough, alas, to save the film or the show its actors are in). But not such Eadweard Muybridge’s two women walked up to one another in 1887 to engage in a kiss or William Kennedy Dickson’s young men took one another in their arms in 1894 to dance has a truly gay figure in film really appeared to be enjoying himself. Far more than the Wildeian attempts at wicked wit of the sad players in the band of boys gathered for a party in Mart Crowley’s 1970 work, this queer boy from 1933 is perfectly delighted to throw out a riposte for each and every occasion, while his subjects are equally pleased to bow down to him for his superior naughty wit. What a gift this silly little film has given us in Clarence. If they only knew it, Beatrice Banyard and Boasberg might have handed over their collective BB-guns to Clarence to let him take endless shots at the entire cast.

All we have left is a little buckshot in the rear, as our resident queer, dining in the aforementioned Chinese restaurant teaches Bonnell how to properly knit while he patiently sits for a while to play straight man to her comic attempts to explain where she was born (“My Aunt Minnie’s house.” “And where did this Aunt Minnie live?” “She moved.” “Exactly where were you born?” “In the front room on Thursday morning.” “How do you know it was Thursday?” “’Cause the next day they wouldn’t give me any meat.” It goes on....) Tired of playing “second banana,” he stands, announcing “I’m a wreck. I’ve been on my feet ironing all day.”

Moving off to another table, he declares it’s his birthday so he’ll take every check, which once presented to him, he holds out his hand out to ask politely for the money with which to pay them. Unlike Harold’s birthday party in The Boys in the Band, no one goes home bitter or unhappy here, for Clarence’s humor is never mean but simply points up all of our self-delusions. I shall always imagine Myrt and Myrtle’s gay boy lounging about in his kimono with a good book or even a cute boy waiting in his bed.

Posted by greenintegerblog at 9:42 AM