A variation of the Spaghetti Western genre, Mexican director Alberto Mariscal’s Los marcados (The Call Him Marcado) is of a sub-genre of the violent cult Westerns which include as Guilio Questi’s Django Kill...If You Live, Shoot! (1967), Carlo Lizzani’s Requiescent (Kill and Pray) (1967), and Giorgio Capitani’s The Ruthless Four (1976) filled with violent images particularly against women and dominated by homosexual gangs whose purpose in shooting up entire villages seems vaguely focused on a combination of money and revenge. 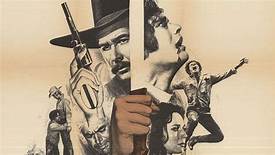 Yet of this quartet, Marcado seems the strangest in that the gang headed by El Pardo, of mixed-race (El Pardo means “the brown one) (Eric del Castillo) is backed up by his handsome, vicious psychopathic son The Kid (Javier Ruán) who, residing with their mostly homosexual cohorts in what appears to be a ruined ancient stone artifice, live in an incestuous relationship. Their arch-enemy Mercedes (Flor Silvestre), the head of the nearby town’s brothel, is “the Brown’s” former wife and The Kid’s mother. To speed their murder, Mercedes has hired her ex-lover, the heavily scarred Marcado (Antonio Aguilar).

Yet the tales grows stranger by the moment as we slowly begin to uncover, without ever truly answering, what happened in this tragically dysfunctional family. The few clues we’re given lie in Mercedes’ dreamlike images of her husband and son walking with her through the wheat, small sheaves of which she keeps in vases in her bordello bedroom. Did she leave him for Marcado or, just as likely, for her apparently lesbian co-worker Remedios (Carmen Montejo); or did he leave her as he warmed up to the young body of his son?

Whatever happened she has now become the wealthiest woman in the dreary little town of self-righteous crooks, whose major spokesperson attempts to overcharge the bordello, the most successful business in town, for the vast quantities of alcohol and spirits (300 cases of scotch, 300 cases of bourbon, 300 cases of Black Barrell, 200 cases of Cognac, and 150 cases of communion wine for a total of 32,500 pesos for which she agrees to pay only 24,000) he purveys to the august prostitution palace Mercedes runs.

While the villainous outlaws which her husband El Pardo unleashes on the village from time to time, rape, pillage, burn, and slaughter everything and everyone they can get their hands on, the fine upright townspeople who attend her nightly festivals of fornication are violently homophobic, treating a well-dressed, good looking man who inexplicably shows up at the local whorehouse to participate in a pre-coital dance as if he were such an outrageous pansy that they demand he dance with them before might touch female flesh.

Just to establish the alternative, director Mariscal begins his film with an attack of the gay psychopaths who rob the bank, shoot, and kill—the Kid eviscerating a young female shopkeeper who evidently was once his father’s lover—before burning down much of the rest of town. Somewhat as in like a Cecille DeMille spectacular hundreds of bodies line the streets with wailing ex-lovers by the time “bandits” eventually take their leave.

Most of the remaining frames of the film are pure camp, as Mercedes pouts, scowls, and drinks away the days while Marcado plots out and gradually picks off El Pardo’s men one by one. In the meantime “the Marked one” melodramatically cites the truism of the film to a drunken Remedios:

...Everyone is marked. We all have scars. The wounds remain

under the skin. These remain open.

In the meantime the gang, holed up their stony edifice cruise one another—El Pardo shoots one handsome lad who effectively evokes the lust of his son, dead—take baths and preen themselves in a long mirror set out on the desert floor. While The Kid is wrapped in a sheet of white cloth (his favorite color is red, the color of blood; as we noticed in the town scene he was so excited pulling out a bolt of red satin that he nearly forget to kill the milliner he was seeking), the Brown wears a flannel pink shirt and brown dungarees. The red and white colors are picked up in their long “last supper”-style table covered with a white cloth, with red velvet chairs placed at regular intervals—obviously, one of their gang being an excellent exterior decorator.

At one point The Kid declares it’s time for him to perform—whereby the boys gather round, knowing that their inattentiveness will surely draw the ire of El Pardo—as the boy reads Hamlet’s soliloquy:

Alas, poor Yorick! I knew him, Horatio: a fellow

of infinite jest, of most excellent fancy: he hath

borne me on his back a thousand times; and now, how

abhorred in my imagination it is! my gorge rims at

it. Here hung those lips that I have kissed I know

not how oft. Where be your gibes now? your

gambols? your songs? your flashes of merriment,

that were wont to set the table on a roar? Not one

now, to mock your own grinning? quite chap-fallen?

Now get you to my lady’s chamber, and tell her, let

her paint an inch thick, to this favour she must

come; make her laugh at that.

Who knew that theater was alive and well in the Chihuahuan Desert? 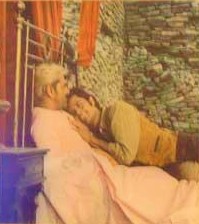 The rest of the time The Kid and The Brown loll about in bed, the boy enjoying his father’s attentions, but also bored, ready to ride again into town to destroy Marcado before he kills any more of their men.

When the gang is finally lured back to the village, The Kid and El Pardo wind up in the local bar awaiting Marcado’s next move. Again bored, The Kid demands his father shoot shot glasses off the bartender’s head as if to play William Tell aiming an arrow at his son’s head-top apple. After three successful aims, he inevitably misses, as the poor bartender drops dead.

When The Kid decides he wants a tattoo, the local Chinese tattoo artist is called in, almost fainting in the pleasure running his hand against the previously unpotted soft skin of the boy’s back. But after a few minutes of the intense pricks of the needle, The Kid can no longer bear the pain and shoots the tattoo artist dead as well.

Eventually, the two of them again escape to their mountaintop fortress with the Marked one of their trail. Mercedes hiding in the shadows of the stone wall has beat him there as the two wait for El Pardo to make his run. When he does, Marcado shoots him several times as he finally falls into a small pit. Similarly, when The Kid finally can longer bear the wait, he too comes to face the Marcado.

Mercedes, dressed like Medea all in black, comes forward to hold her son in a pietà position as she cries, “Hush, my boy, Hush.”

I might add that the incessant sound of gunfire is backed up with a sophisticated saxophone jazz-inspired score by Paul Sawtell and Bert Shefter.