the picture of dorian gray 1910

Axel Strøm (writer, based on the fiction by Oscar Wilde, and director) Dorian Grays Portræt (The Picture of Dorian Gray) / 1910 Lost Film

What appears to be the very first cinematic adaptation of Oscar Wilde’s The Picture of Dorian Gray was directed by the Danish filmmaker Axel Strøm and released on October 6, 1910. The silent film was produced by Regia Kunstfilms with cinematography by Mads Anton Madsen. 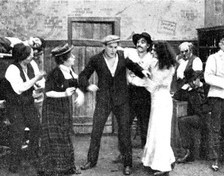 Since the film is lost we have no idea what scenes the film portrayed from Wilde’s original text or whether these contained any overt homosexual references. However, In his Queer Cinema: The Film Reader Henry Benshoff notes that in the 1910s films begin to explore for the first time “the monstrous as expressed in the gothic literature of the nineteenth century.” Films such as Edison’s Frankenstein (1910) and D. W. Griffith’s adaptation of Edgar Allan Poe’s “The Tell-Tale Heart,” The Avenging Conscience (1914), along with seven versions of The Picture of Dorian Gray began to explore the males monsters of the previous century, with the 1917 version of Wilde’s story, in particular, characterizing Dorian Gray as the devil. Clearly, these several depictions of Wilde’s Gray began to establish the homosexual as a monster, a danger to the society at large.