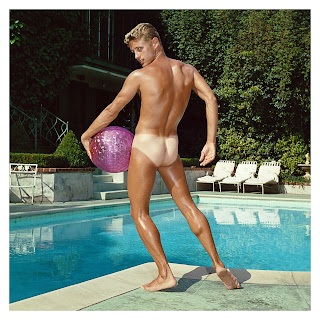 Yet his, Bob Mizer’s and other such artists’ works ultimately influenced the photography of major artists such as Robert Mapplethorpe, Herb Ritts, Bruce Weber, and numerous other photographers and filmmakers.

Like Mizer and other “beefcake” photographers, Bruce of Los Angeles—who was born in Nebraska, living most of his West Coast years not in Los Angeles but in nearby Los Alamitos in Orange County—also made films, 12 of which accompany the major retrospective photographic collection of Bruce’s images Inside/Outside published by Powerhouse Books/Antinous Press in 2008.

Of the 12, I’ve seen only 6, but I presume that those I viewed—Patio Antics, Look Me Over, Shaping Up, Swimming Hole, Robbery on Oak Hill, and Cowboy Wash Up—are representative of the full dozen. Presumably, all of these black-and-white and color films of three to four minutes, shot on a Super-8 camera, were from the mid-to-late 1960s or, in one case, possibly the late 1950s. Cowboy Wash Up was released in 1965.

Patio Antics, featuring the model Lance Arlen, is typical of the group. A handsome, clean-cut blond man, Arlen basically spends his time in the backyard bungalow in which he is supposedly “foolishly or outrageously playing” (the meaning of “antics”) by doing various calisthenics—jumping jacks, push-ups, hand-to-toe pumps, leg-lifts, etc.—between showing off his muscles in various bodybuilder positions while dressed in a black bikini all of which is accompanied by a jazz string bass with clicking fingers. He does a handstand and a somersault. At one point he picks up a football posing in an attempt to sail a pass to an invisible linebacker. At another point he suddenly appears with a whip which he cracks three times before rolling it back up again. He turns to the camera and smiles. The end. Pretty to look at and pretty boring.

In Shaping Up the darker-haired Phil Knight, dressed in a tight black shinny swimming suit, pretends to mow his backyard lawn and to shear a couple of branches from a nearby bush before he gives up on gardening, pulls off his shorts and, in a white posing strap, shows off his well-developed pecs by limbering up and lifting barbells. He also poses in the required bodybuilder positions, right hand extended, left arm crooked against his waist to expose the back muscles and his well rounded buttocks.

Suddenly he gets a yen to water some plants, the camera slowly pulling down from his frontal stance to pause at the outline of his cock locked within the strap. And of course the spray of that nozzle just has to be turned on to wash off his feet and finally full body before the 3.18 minute short ends.*

In Look Me Over an unidentified Italian-looking model (one commentator argues the model’s name was Joe Napoli) poses in a tight seemingly skin-colored (hard to discern since the film is in black and white) pair of pants. This time you can most definitely see the outline of his cock, and the model is quite clearly self-aware of his role of performing as beefcake. Unlike the previous two models, this boy rubs his hands across his breast, down his mid-riff and briefly across his penis before positioning himself into the standard physique stances. 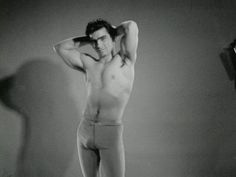 And this time there is no pretense of ordinary boy outdoor “antics,” as he coyly turns and smiles at the camera before pulling down his shorts to expose himself in the posing strap. Once again he slightly grins as the camera wanders down from his face to his feet and back up again. As he turns to display his lovely ass, he mocks a little dance of indetermination as if asking us “What do you want?” This guy is definitely playing with the camera and the viewer.

Soon he walks over to a small rectangular posing box conveniently located nearby and sits. He spreads his legs out to further reveal his crotch before pulling his legs up to join the rest of his body on the box, appearing for a moment as if he were fully in the nude. It’s the kind of game female strippers festooned in pasties used in pretending to be more fully undressed than they truly were, the way Gypsy Rose Lee hid half of her body behind a curtain while exposing the other.

In this case the male sits back as if perfectly happy to let the camera spend a lbit more time in gazing over the sculptural object he has allowed himself to become. Eventually he lifts out his legs and with his arms and hands gradually lifts his entire body off the box while remaining in his sitting position. He raises his right leg, turning his face full to the camera and pauses before lifting up both of his legs into a V-position before coyly dropping one of them again to his side. Turning over, ass up, he lifts each leg almost as in a sexual invitation, allowing the strap to openly hang below his arched body to display his balls. He knows what the voyeur in us wants as he waves goodbye, stands and, ass to the camera, pulls off his posing strap before strolling out of view.

My guess, given the obvious striptease like playfulness of this 4.25 minute film that it is earlier than previous works featuring clean cut models who seem to be “caught” in the glory of their near-nakedness instead of actively engaging with it and us.

Robbery on Oak Hill seems almost out of place among the works I viewed given its more narrative elements and its clearly campy presentation of a sun-tanned cowboy in a red posing strap sitting on a log while a variation of Elmer Bernstein’s introductory theme music for the GE Theatre television series of 1953-1962 thunders in the background. Obviously, since he is wearing a black hat, he’s the robber. And before you can even register that fact another man dressed in a brown hat and an identical red posing strap rides up on a horse, the robber pulling his unhidden gun, demanding the other get down and move off further down the field. This is almost like something out of the 1948 film Red River. Afterall, it’s a very nice gun.

In the midst of their movements into the wilderness the “good” guy (he’s also got blonde curly hair while the robber is raven-haired) turns and begins to attempt to wrestle the villain to the ground. The two pretend to struggle for some while, the better to show off their lean tanned bodies. The villain almost tops the hero in the battle, turning the tussle almost into a down-and-out rustle of the good boy’s virginity, not permissible in them-thar-days. 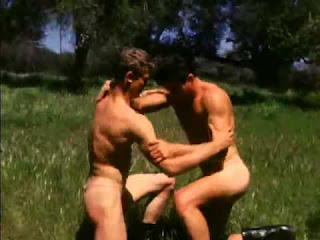 Of a sudden they find themselves both in a standing position and turn to camera, waving their wrists as if to say, “Enough already,” before grabbing their hats to walk off hand-in-hand into the sunset for a few feet before they both drop down to stretch out their beautiful bodies in the sun. Soon they both get to their feet again and walk directly toward the camera covering up the lens with the robber’s cowboy hat. The end. We all know how the next episode will begin.

The best of these improbable beefcake charmers, and certainly the most well known, is Bruce’s 1962 Cowboy Wash Up starring the hunky pretty boy Dick Dene. The hairy bare-chested cowboy wearing only denim shorts, boots, and a hat rides up on his white steed, gets down and begins to brush the horse. The music is a kind pleasant ditty with the rhythms of a cantering colt.

Finished with the horse, he briefly brushes himself off before pulling the horse into his nearby pen. Locking up the paddock from the inside, our cowboy goes over the small water trough, sits down, and pulls off his cowboy boots. Once finished, he stands, pulls off his denim shorts which he hangs up on a nearby post, and takes off his hat. Dressed now only in a white posing strap he rinses his hands and face, bending to display everything he’s got. He then picks up the denim shorts, rinsing and rubbing them out in the trough before wringing them out and hanging them up on the fence again. Putting his hat back on he takes up the wet shorts and pulls them on, carefully tucking in his cock before buttoning them up. 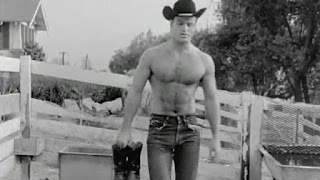 With the wet pants on his body he exits the paddock, waddles over to a nearby rock, stares a moment into the sky—as a single strain of Sammy Fain’s and Paul Francis Webster’s 1953 hit song “Once I Had a Secret Love” (sung by Doris Day in that year’s film Calamity Jane) is heard—before laying back to dream out The End.

If these chaste pornographic fantasies seem almost innocent today, they were thoroughly effective for an audience who had had little encounter with actual visions of flesh outside of bedroom and backseat car encounters. I think some of the Beefcake magazines must have been my very first encounter back in Iowa with male nudity; and I liked what I saw. Who needed to see an exposed  cock when you could imagine it so very explicitly? These men belonged only to the holder of the magazines in which they appeared; separated and isolated from the violation of others, they were waiting just for the voyeur’s caress.

*The Pacific Standard Time/Bruce of LA exhibition at Poptart Galley in Los Angeles in October 2011, featured a crude remake of Shaping Up with a heavily tattooed model named Hot Croque who clumsily performed similar tasks to what Phil Knight did in the original. Clearly satiric in intent, this bald-headed, chunky, not very attractive model goes through all of the actions for very little effect, the end almost crashing the little film down with relief.