While pregnant with their child, Kitty Lorraine (Alice Brady) watches her husband Fred (Russell Hardie) fall to his death during a vaudeville acrobatic act. Penniless, she has no choice but take her newborn daughter, Shirley (Maureen O’Sullivan) back to her deceased husband’s religiously conservative Boston family who demand the course-speaking, stage-loving daughter-in-law give up the theater. Reluctantly, she does so, working as a singer behind the music counter in a department store, but is fired when she suddenly meets up with her old vaudeville friend, Ralph Martin (Ted Healy), briefly inviting him behind the counter to share in a chorus of the newest sheet-music hit, Fred Fisher’s "Any Little Girl, That's a Nice Little Girl, Is the Right Little Girl for Me." 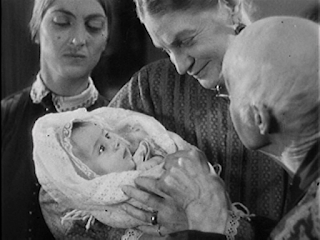 Soon after sharing drinks with Martin and returning to the Lorraine home inebriated enough to describe her almost mustachioed sister-in-law, Ida, as a “silly old maid” she is told to leave her parent’s-in-laws home, sadly putting her daughter Shirley into their care.

So begins a saga that might almost be described as a schema for the later Rose Hovick life-story woven together to become the Jule Styne, Arthur Laurent, and Stephen Sondheim hit musical Gypsy. Everything that’s featured in that 1959 hit is already here in the 1933 film. The hard-boiled, tough-talking Kitty, once she gets her hands on her now teenage daughter with whom, in her mind, she stands together “against the world,” lets loose a splendiferous whirlwind of bitter frustrations emanating from the theater world she still desires and all men whom she now hates for standing in her way to stardom. Brady is rather marvelous in the role as she makes her way from a simple uneducated showgirl to a street-wise showbiz agent to finally become the course, mean-mouthed manager of Shirley’s career. It’s hard to imagine the same actor playing, just three years later, the ditsy Park Avenue socialite Angelica Bullock in My Man Godfrey—except that you’d recognize her nervous he-haw of a laugh from the other end of the longest hall of the Metropolitan Museum of Art.

Kitty like Rose gives up everything—including her own mediocre stage career—to transform her awkward conservatively-schooled, spectacled daughter into her version of Dainty June, a whirling fairy dancer who quickly whooshes her way from vaudeville, to dancing spectaculars, before finally landing major Broadway musical roles. 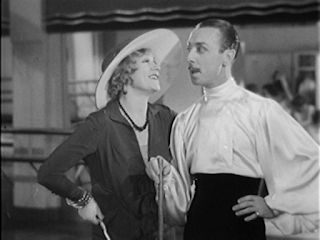 That transformation begins with the familiar tropes, some of which appear in the later incarnation of this work. Shirley is first handed over to the capable hands of the stock gay dance instructor, Mr. Sterling (Jay Eaton), who purses his lips into a drill of perfectly punctuated leg positions:

One and two and three and four

We are fairies and we are elves.

One and two and three and four

Then we bow and pluck the rose.

When Kitty asks what he thinks about his new student, he responds with the necessary superlatives: “Simply divine, my dear, simply divine.” From the side of her mouth, which from now on is the route her words take to reach their intended marks, Kitty responds: “I can throw a lot of good things your way,” hinting, obviously, that she can hook him up with attractive young men.

Just as June Havoc (the original Dainty June) observed late in her life: “I will definitely say that Mother liked homosexuals,” the outsider Kitty recognizes her link with gay men.*

Shirley’s first audition again parallels the later musical retelling of the “stage mother” myth, except this time there is no need to stick a pin into the balloons covering the amateur winner’s waist. The first singer, a young boy singing a wispy, slightly out-of-tune, voice-cracking version of “When Irish Eyes Are Smiling” characterizes the dreadfulness of the other performances. The actor in this film is notably Carl 'Alfalfa' Switzer of Hal Roach’s Our Gang comedies made throughout the 1920s into the early 1930s. 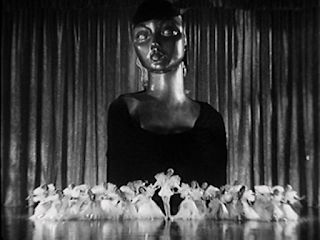 On route to her daughter’s fame, Kitty threatens a dance manger to whom Shirley is under contract by exposing his illicit affair with a married woman; shoots down the possibility of Shirley’s marrying her one true love, a painter born a Boston Brahmin (Franchot Tone), by threatening to sue his mother for his sexual advances; and attempts to hook up her daughter with the soon-to-be mayor of New York City, Al Dexter (Alan Edwards) before his managers suggest that if Shirley doesn’t disconnect herself with the mayoral candidate she might have an accident and Kitty arranges a $25,000 settlement. Whatever Shirley does, her mother is close behind her; even the great dance sequence in which the Shirley spins about in her gossamer wings features a Buddha-like image in the background--cooked up by art director Stan Rogers--that looks like some sort of goddess to which the women-in-white are forced to pay homage.

Kitty uses some of that money to travel with her daughter on a cruise ship to Europe, whereupon Shirley meets Lord Reggie Aylesworth (Phillips Holmes), who like the others, falls in love with and asks her marry him. By this time, just as in Gypsy, Shirley is determined to push her mother out of her life so that she will be unable to interfere with their relationship and, most importantly, will not be an embarrassment to Aylesworth’s blueblood family.

Although Brady’s sudden transformation from a forceful conniving controller to a tearfully terrified mother about to lose the only purpose she has in life is fairly unbelievable, she convinces her daughter enough that Shirley realizes that she does not genuinely love Reggie, having already lost her real chance of true love with her first fiancé, Warren. To redeem herself and regain her daughter’s love, Kitty produces a letter Warren has written to Shirley apologizing for having blamed her for her mother’s actions and attempting to win her back. Handing over the epistle, Kitty gives her blessing for one thing that her daughter has been missing all her life, happiness.

The film is interesting to LGBTQ individuals not simply because of its single scene representing yet another despicable gay stereotype, but because of the myth it embodies. As monstrous as stage mothers always are, they provide a natural magnet to homosexual audiences, I would argue, because of the representation of a strong female heroine who works against the system to push her outsider child into artistic fame, in the standard version symbolized by the Broadway stage. The stage mother is anything but the normative feminine model being rather an outrageous protector and promoter of the special, the person of exceptional unknown or even outlandish and disrespected talents—in short, a queer being. The mother, in this trope, gives up any skills and talents she may have possessed, her feminine wiles, her marital status, and even her life if necessary to make certain that her son or daughter will be able to join a society of people who most of the normative world reject out of hand and see as outsiders unworthy of marrying anyone in their societal circles. By fiat, in this fictionalized version of reality, actors are no different from homosexuals, bisexuals, or transsexuals—dangerous beings who have no time or ability to procreate nor provide their offspring with the proper upbringing that the normative world requires. They are all by definition narcissi, interested only in their images and variations of being.

And it is absolutely no accident, I insist, that the most notable performers of the grand monster of a stage mother in Gypsy, Ethel Merman (for whom the role was originally written), Angela Lansbury, Rosalind Russell (on film), Bette Midler (on film), Tyne Daly, Bernadette Peters (whose own mother belonged emphatically to the “stage mother” tribe), and Patti LuPone are all significant gay icons for males from Cole Porter to young gay men like my friend Felix Bernstein.**

*After being pushed away from both June Havoc’s and Gypsy Rose Lee’s lives, as Havoc wrote in her memoirs, Rose “turned toward her own sex,” running a lesbian boardinghouse in a 10-room apartment Gypsy rented for her on West End Avenue, and then running a sort of lesbian farm in her country house in Highland Mills.  At a party in the house, Rose toke a gun, this time to one of the girls, who she killed. Her involvement in the killing was kept out of the newspapers due to Gypsy’s notoriety. Gypsy’s son, Erik Preminger (the illegitimate son of director Otto Preminger), however, has clarified the situation: “There were a lot of people there when it happened. The girl was Rose's lover and she made a pass at my mother.” (Source: Laura Jacobs, “Taking It All Off,” Vanity Fair [March 1, 2003]).

**I’ve seen four of these notable performances, but I must admit that by the final version I attended, Patti LuPone’s performance in 2008, the work and perhaps the myth had finally lost its spell. As I wrote of the operetta (as I described it) after witnessing LuPone’s performance: “The audience can do little but sit in stony silence or madly applaud! As if witnessing the death dance of the mad Medea or the passionate self-willed rape of Salome, one recognizes Rose’s last long screed (“Rose’s Turn”)—performed supposedly in an empty theater where we sit as voyeurs—as something nearly unbearable to watch. Her daughter’s lame response, “You could have been great, mama,” is a death knell to this woman born too early and come to performance too late. “Could have, would have,” Rose bites back, knowing that despite all the living she has done vicariously through her daughters, she stands alone on the stage, bowing to an imaginary audience. The fact that we sit there, madly applauding her desperate lament, only reiterates the fact that, within the drama itself, she faces the silence of death.” (USTheater, Opera, and Performance [June 2011])

Reprinted from My Queer Cinema blog, and World Cinema Review (2021).

Posted by greenintegerblog at 10:58 AM