What Francis Savel did at the beginning of the 1980s for the generations before him, deconstructing images of gay desire in his Équation à un inconnu (Equation to an Unknown) (1980), so Greek-born Constantine Giannaris accomplishes anew in the 35-minute short Caught Looking (1991), but this time with an even greater sense of historicism. 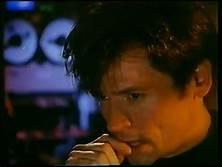 And, particularly for an active gay male, knowing the genres and having even participated in the sexual milieu of the games’ fantasy heroes is important in the same way that an adult heterosexual male applies his high school memories of the sport in playing Fantasy Football.

In the process, with his self-mocking commentary, Stephen takes us also through a simulacrum of gay filmmaking from Victorian fantasies, Jean Genet-like bordellos of the late 50s and 1960s, innocent musclemen physique works of the mid 50s-60s, and the gritty toilet (or in Britain “cottage”) scene of the 1970s-80s, to contemporary times, planting us down into the pay-for-sex loneliness of the 1990s and the early years of the Millennium.

In that sense Caught Looking is perhaps a bit too programmatic. Although presented slightly out of chronological order, one almost knows—if one has been at all active in the gay sexual world over the past several decades—what is coming next and how those sexual figures will engage. Had Alfred Kinsey had such a film available, it might have saved him years of research time and energy.

Once we have gotten the game’s rules out of the way, the film plops us down immediately on the streets of British imagination—and this work is very much from the viewpoint of the English— US, German, French, South American, and Asian viewpoints would have taken us in several different directions; leather, western, and S & M genres are primarily ignored, for example—where two sailors (Grant Cottrell and Johnny Johnny) have just arrived in town. Immediately, the besuited surrogate for the viewer, looking at bit as Stephen comments like Dirk Bogarde in Death in Venice, enters the screen to follow them to a harbor bordello where he pays for the sailors’ overnight room.

There are also encounters with other Genet-like figures, the “dirty” street boy, “exotic” blacks, a tattooed trade figure, and a “pretty boy in tears” writing a letter (“to whom?” the narrator inquires: “His lover, his mother?”), the latter being the closest we get to a “coming out” story. A couple of men (Paul Spencer Dobson and Anthony Melon) are already in bed engaged in sex, enticing presumably those who like threesomes, which our Voyeur apparently doesn’t. A young black kid, Michel Compton (Michael Cox), catches his eye. Clicking on a key that evidently provides a brief interactive biography of the selected figure, the Voyeur discovers that the kid is 20 going on 17, a “chicken” too young and dangerous for his delectation.

Besides he’s on the prowl or what gay men describe as “cruising” before making “decisions, decisions.” The next “room” is a toilet or a British “cottage” where the action is nonetheless universal, filled as it always is with “city boys, casual laborers, truckers (a nod the narrator says to US porno), Disco Dollies, boys on the dole, and one young college kid who reminds the Voyeur  too much of youthful self. Although intrigued by and slightly nostalgic about the pissoir action, he finds the mustachioed tough too quick to action, unable to savor the slow seduction of the college kid he entices. Of course, he might have noted the hurry of such places is partly imposed by the regular surveillance of the police, who he suggests have closed down most, but not all, cottage action. And later, when Stephen returns to the toilet to watch the surrogate besuited businessman catch the action through the viewpoint of a tiny glory peep-hole, we hear the pounding feet of the local copper doing his closet inspections. 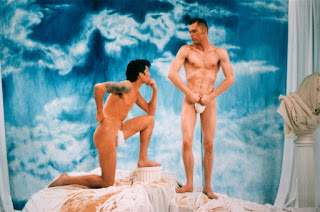 The third room represents a trip back in the time to the 1950s physique magazine shoot, the ridiculously refined cinematographer desperately attempting to edify the humps of the perfect symmetry of  rectangular curves packed up in posing straps with the knowledge of the Greeks and Romans. As the Voyeur perceives, it was an absurd exercise in frustration for those queens who loved the boys without daring to touch, necessitated, he admits, by the recreational hazards of blackmail and possible imprisonment. So despite his disgust of the Drama Queen’s tears when his two models suddenly pull off their straps and jump upon one another’s bodies, he is somewhat sympathetic. After all, he too is fascinated by one curly haired Greco boy and interviews him only to discover that he’s a surly rebel when it comes to love (“Love’s dead.”)

After the brief return to the cottage and a swing back to the bordello where his surrogate takes out a camera and films the two sailor boys having sex, after which one of them, grabbing up the wad of cash gently kisses him on the lips, the closest Stephen gets in this film to sex.

A sudden visit to a Victorian fantasy skit dominated by a transvestite Madame (Ivan Cartwright) is where the Voyeur finds himself attracted to a pretty Tunisian boy named Karim (Sofiene Levert). Our narrator finally determines its time to choose someone with whom he might interact. He pushes the necessary button, but too late; he is “caught looking” without anything to show for it unless he pays for a higher level of virtual interaction next time he visits.

Posted by greenintegerblog at 6:06 AM