One of the series of films broadly concerned with AIDS, L'@mour est à réinventer, presented on French television in 1996-97 was David Ottenhouse’s short Close To.* This powerfully odd short, has almost no little dialogue given the fact that one of its figures (Alexis Arquette**) evidently cannot speak and expresses himself only in grunts and other noises, while the other (Steve Wood) is a quiet shy man who says little to the waitress in the luncheonette where he is drinking his coffee. (Since, other than the waitress, there are only two unnamed figures in this work, I shall designate them as A and W, a sort of hot fizzle of root beer).

The affable and handsome W is sipping on his coffee when the somewhat odd-looking A stumbles into the café and, at the cash register, grunts and points to the wall, the waitress discerning his gestures to mean a hamburger. As she turns away, he quickly pockets a piece of pastry from a small basket near the register. He seems almost pleased with his petty thievery until he turns and realizes that a customer has observed his actions. There is a moment of doubt about whether his acts will be reported as he turns away from W but then turns his gaze toward him again almost as a challenge. But a slight grin of W’s thin lips reassures him, and he also appears to like what he sees in the man’s face since he walks forward to him extending his hand which the other gently grasps, not as in a traditional handshake but in a gesture we might describe as holding his hand, almost as a lover might. It is a subtle difference that happens quickly but is important in the explanation of the events that follow. 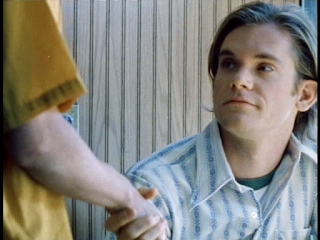 A moment later W stands, tosses some change on the table, and walks out to the street. He lights a cigarette and begins to walk off, A moving to the door of the luncheonette and, after pausing in the doorway, suddenly begins to follow as W turns into a New York City subway entrance and begins a descent several floors below, signifying that this station is a connecting link in the system with trains meeting up her on various levels. The descent is important since it embraces 84 seconds of the 9 minute film, and by the time W arrives at the lower level the ordinary reality of the street gives way the surreality of what might can only be described as something close to an S&M public sexual encounter. 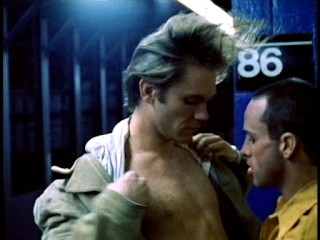 For the moment after W reaches the tracks starring off into the distance to see if he can glimpse a train, he feels a hand on his shoulder and, in turning back, discovers he is facing A. In the next second A has moved into W’s chest with W raising up his shirt to allow A suck his nipple. In the next minute they have moved up against the subway wall as A goes down on W to perform an almost violent act of fellatio. Almost the rest of the film consists of the intense blow job A gives W while at the same time twice attempting to pull his billfold from his back pocket—in both cases W, sensing the motion, swats his hand away—and at another point pulling a knife out of his jeans ready to use it on his lover presumably when W finally ejaculates into his mouth.

Ottenhouse underlines these acts and their intent by alternating real-time action with slow motion and momentary stops in which the figures are bathed in white light, creating a far more vivid sexual encounter that a simple “quickie” in the subway would otherwise entail. This also contributes a sense of the transitions between the real-time pleasure W takes in being sucked off and the peripheral role A plays as a threat to his physical being while, at the same, revealing how W continues to control the other while simultaneously experiencing the ecstasy of sexual release. Both men are aware of their joy in the act while comprehending the dangers of what they are doing: the possibility that they will be seen by observers, arrested by police, robbed, or even killed. It is precisely the kind of thrill some men and women get in having sex in the time of AIDS without protection—the danger fortifying the exaltation. 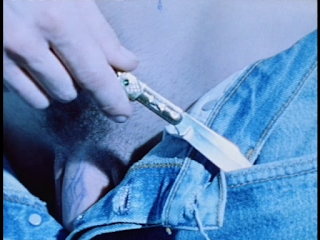 The moment W ejaculates, he grabs A’s left hand wrapped around the knife and holds it tightly in place as he bends down to kiss his forehead. A moment later he kicks the now almost naked A away from him and runs off, jumping to a waiting subway just as the doors close.

*Although Ottenhouse’s film appears on the DVD collation of the Love Reinvented films, there seems to be some question whether Close To was one of the films actually presented on French television, particularly because the DVD contains 12 films, while evidently only 10 were shown in the TV series, all of these by younger French directors. The Ottenhouse film, moreover, was shot in 1997, whereas the TV series appeared in 1996. It may be that two other films were included on the DVD or that the other two shorts were aired on TV after the original series.

**As reader’s of these pages will perceive, Arquette is a name that appears numerous times in  my discussions of LGBTQ films. One of the several brothers and sisters of the famous acting progeny of Cliff Arquette (who is known by the stage name of Charley Weaver), Alexis appeared in 68 films and numerous television features and series from 1989-2014. Long featured as an androgynous figure in several of his roles, in 2004 he underwent hormone therapy and ultimately sex reassignment surgery. In 1987 Arquette discovered that he was HIV positive, and in 2016 she died of the disease.