We do not know the director of the Thanhouser Company’s production of the 13.49-minute film from 1911, The Pasha’s Daughter. The internet film site Fandor attributes the work to Francis Boggs (director of the 1908 film version of The Count of Monte Cristo), whereas other sources suggest it probably is the work of Barry O'Neil or Lucius J. Henderson. The most likely scenarist of the film is Lloyd Lonergan, a long time newspaper reporter who may have written about the real event upon which this short was based. The male leads are played by William Garwood and William Russell, presumably Garwood acting as the American traveler Jack and Russell performing as the Turkish Pasha.

Jack is touring Turkey by train when he encounters the Pasha who, seated in his train car, suddenly finds himself without his billfold to pay for his ticket; Jack quickly comes to the rescue, paying for the older man’s fare.

In appreciation of his kindness the Pasha invites him to his home for the night. While the Pasha enjoys his hookah, Jack follows the servant to his designated room, returning soon after to enjoy the company of the Pasha. 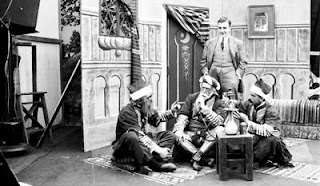 Suddenly and quite inexplicably soldiers arrive to denounce the Pasha as being a conspirator against the government, and soon after they arrest Jack as well.

In prison at one point Jack overpowers a guard and attempts to escape, but is immediately caught by another guard and returned to the cell. Soon after, seeing a blanket laying on his bed, it gets the idea of how to escape. Applying his pocketknife to the molding of cell window, he is able to pry loose one bar, and, having tied up the parts of the blanket into a long rope, slips through the window and drops to freedom.

He is quickly met by another guard but is able to overpower him before climbing another wall to drop into the courtyard of the Pasha’s palace. 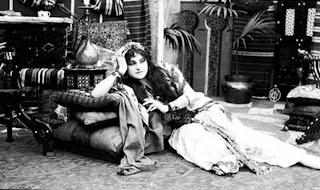 A few minutes earlier we observed the Pasha’s daughter and other women of the harem waiting in the garden to meet with the Pasha, who evidently has been freed of the conspiracy charges. Now Jack encounters the daughter alone, explaining to her his situation and begging for help.

The daughter, Murana, calls her servant and insists that he prepare Jack for escape. Meanwhile other guards enter the courtyard quizzing both the daughter and her manservant if they have seen the young American. Her face hidden behind her veil, she shakes her head “no” as does her servant.

Insisting that Jack smoke the hookah, he tells him the only way to escape is to dress like one of the harem women, providing him with a costume. Presumably, he is convinced that the only way he can get the young Jack into female custom is to drug him, but after a few puffs of the hookhah, Jack laughingly accepts the challenge, dressing in a gown and hiding his face behind the traditional veil. (With its concerns about a young American being arrested and imprisoned in Turkey along with his smoking drugs, one might almost imagine this was the precursor to Midnight Express of 1978).

Murana reappears to check on him, he thanking her for her help. When he pleads to see her face he is stunned by her beauty and begs her to escape with him so that they might marry, an odd marriage proposal given that he is dressed in female garb.

The daughter tells him she cannot join him but perhaps will meet him some time in the future, presenting him with a flower, he, in turn, gifting her with his calling card on which is printed his address so that if she ever reaches the US she know where to find him. They kiss and he escapes.

A year later Jack and his mother, back in the US, are standing in the living room when the Pasha’s daughter, now dressed in western clothing, is ushered in, she telling him that since she has now arrived in the new world, she is ready to marry.

He is intrigued, but doesn’t quite recognize the beauty, and she turns as if to leave, looking back toward him for a moment as holds up the lace overlay of her dress to mask the lower part of her face. Suddenly he realizes it is Murana and rushes to embrace her, introducing her to his mother who apparently has heard a great deal about the young woman he met in Turkey.

This film survives in the archives of The Museum of Modern Art in New York city.