François Dupeyron | Et alors? (So What?)

through sickness and through death

Lisa (Gwenaëlle Simon) drives her friend Marie (Camille Japy) home from a party, but somewhat inexplicably Marie does not want to leave the car. She invites Lisa up for a drink, but her friend says she is tried. And still she pauses, even after removing her seat belt. “I find it hard for me to get out of your car.”

Lisa offers a trite quip and Marie is about to leave, but Lisa pulls her back, asking “Shall we go for a drive?” And so they do, the radio continuing with the rap music with which the film began.

Soon after we see them standing on a bridge overlooking the Seine, Marie, after a long pause, asking Lisa if she doesn’t like her. Lisa says she does. In she in a relationship? No. Then why, Marie gradually probes, mightn’t they get together as a couple, since they both are attractive women and attracted to one another?

All Lisa seems to be able to explain is that “It’s complicated,” adding “I’m not what you want.”

“How do you know what I want?” Marie pushes forward. 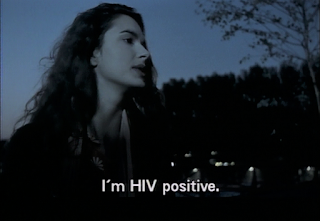 Marie’s answer is both inevitable and a bit shocking: “Et alors?! (So what?!)”

Her friend insists that if Marie remains she is merely pitying her, suggesting that “We can’t even look at each other normally now.”

But Marie, now quite strong and sure of herself, snaps back that Lisa’s believing that makes it all easier, that to see oneself as unwanted and undesirable removes the complexity of the situation.

The two, finally seated on a bench are quiet for a few moments, Lisa finally whispering, “I’m scared,” as Marie gently hugs her close.

This brief dramatization of a kind of a tableau vivant reminds me of the scene in Willard Carroll’s feature film Playing by Heart wherein (also beginning in a car) actor Ryan Phillippe as Keenan confesses to Angelina Jolie (Joan) that he has AIDS, she accepting the relationship immediately despite all the restrictions and suffering it will inevitably require.

The 5-minute short Et Alors? was the 5th of the 10 episodes in the series of films collected as Love Reinvented, broadcast on French television that year.

Posted by greenintegerblog at 9:01 AM