Françoise Decaux-Thomelet’s five-minute film, Pregnant or Lesbian, shown as part of the 10-short film series Love Reinvented on French television in 1996, is a theatrical comic vision of a lesbian’s coming out to her parents.

There have been a substantial number of such films, most recently the 2020 Hulu Christmas special broadcast The Happiest Season, directed by Clea DuVall, in which such an announcement results in a series of complications. But the Girl (Bérénice Bejoas) in this film appears to have few qualms about announcing the news to her folks, perhaps because she puts it in the form of a question, almost challenging them to express which is truly preferable. 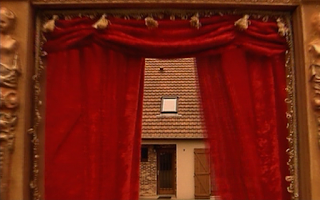 As the curtain opens, the suburban couple in Decaux-Thomelet’s little opéra-bouffe is apparently still very much in love as the Father (Gérard Touratieras) and Mother (Marina Toméas) are found joyfully singing to one another as she prepares fried eggs, he rubbing her ass before she turns, her husband kissing her above the breast. Their lovely teenage daughter, entering, wonders whether or not they might “do without the cracklings at breakfast?” Somewhat disappointed, they stop their stove-side love-making, each demanding a kiss from their daughter, as her mother whispers in her ear, “Antoine called.” “Sophie, too,” adds the father.

The eggs are served up, as the girl plops a pill into her water glass and drinks it, a tennis match evidently being broadcast in the background. As a cuckoo-clock door opens, revealing a white plastic bird with green wings, the daughter turns to the two  suddenly appearing to be several month’s pregnant. The parents stare at her in startlement, as she asks: “Pregnant or lesbian?” (“Enceinte ou lesbienne?”). The mother quickly stands, moves over to her child, and slaps her. The father switches off the TV set. 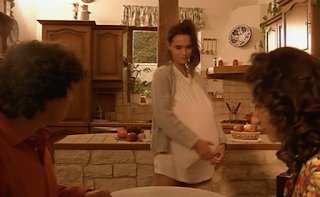 The mother, sitting down again, turns to her husband flashing a brief smile before asking her daughter is she truly pregnant? “No. Lesbian.” the girl emphatically answers. She pulls out the pillow and tosses it to them.

The father stares into his wife’s face intensely whispering: “It’s your fault. You never put your foot down. See where it leads?”

The mother hisses back: “You always wanted a boy. You set a bad example! She’s afraid of men.”

Both have been tightly holding on to the pillow from opposite ends, which the mother in anger finally pulls from his grasp. He suddenly smiles, as the two quickly make up by bringing their ringed hands together in sympathy, apparently, for the situation. They smile at one another, before the mother turns to the observing daughter reporting, “Honey, you’re a love child.” Clearly, she’s admitting that at her daughter’s age she chose the “pregnant” option, or perhaps, it made the decision for her. Nonetheless, it is clear that of the two alternatives her mother may have preferred the former.

The girl smiles and sits down with them, her mother leaning over to say “We’ll find a solution.” “But I’m not sick,” her daughter reacts.

“Is it recent?” the mother asks.

“Is it Sophie?” Her daughter smiles in delight of the thought.

“I was looking forward to grandchildren.”

“But you may still have them. I’m a lesbian,” the girl answers as if clarify that one’s sexual identity and baby-making are the same thing and do not necessarily contradict one another.

“And that’s it,” the teen concludes with a giggle, the little red curtain closing again.

This is a true bon-bon of a work, sweet but not terribly profound. And what it has to do with AIDS, which was evidently the overall theme of these commissioned films, is lost on me. Perhaps since she is a lesbian she has less chance of acquiring the disease than a heterosexual.

We get another perspective of this issue, however, in François Dupeyron’s Et Alors? (So What?), which I shall review next.

Posted by greenintegerblog at 8:46 AM