George C. Wolfe’s 2020 film Ma Rainey’s Black Bottom, based on the 1982 play by August Wilson, is the kind of the work you want to applaud for its wonderful lines, its great acting, and its significant theme, the last of which might be summarized as arguing that in 1927, the time in which the work’s events, no black person was able to escape the endless chains of American racism—which, we recognize, continues on today.

And the work, in part, is a testament of how each of its characters’ lives have been torn apart by the white world in which they must survive. If in some senses the so-called “mother of the blues,” Ma Rainey (brilliantly performed by Viola Davis) has scratched her way up to fame after living an almost unimaginable hardscrabble life in the deep south as a black lesbian singer, in order to maintain that position in the society in which she has become a kind of legend she must daily demand her due, shouting down record producers like Mel Sturdyvant (Jonny Coyne)—who as she herself puts it,  “...don’t care nothin’ about me. All [he] wants is my voice.”—her own manager,  Irvin (Jeremy Shamos), and even her own backup band members, particularly the young, aspiring trumpeter, Levee Green (Chadwick Boseman). Each of them want something from her, Sturdyvant and Irvin financial rewards, and for Levee a temporary shelter from which to develop his own career. Her summary of the situation puts it in the terms of outright prostitution: “As soon as they get me down on one of those recording machines then it’s just like I’d be some sort of whore and they roll over and put their pants on.” Even her current lover, Dussie Mae (Taylour Paige) stays in the relationship seemingly to find a man with whom she might eventually escape. 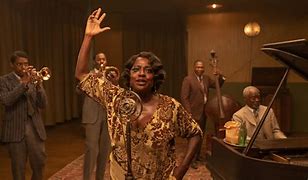 The only way Ma has to maintain her control over the world in which she lives is to make a series of endlessly petty demands: her music must be interrupted without any changes, to cool herself from the hot Chicago air she requires a fan, she insists upon a bottle of Coca-Cola, she requires her stuttering young nephew announce one song on her record and that he be paid.

Pianist, string bass player, and trombonist Toledo (Glynn Turman), Slow Drag (Michael Potts), and Cutler (Dolman Domingo) also have a long history of struggles in the face of racism, the trio feeling blessed just to have a home in the arts with a fairly regular salary. But they too know the pain of lives destroyed by the seemingly unending supremacy of the white society in which they gingerly co-exist. Toledo, the sage, is especially troubled by the fact that even blacks themselves cannot seem comprehend that they, as “leftovers” of a once flavorful ethnic stew out of which the US citizenry developed, must all work together, each in their own way, to make help the society regain its appetite for difference. No one can seem to read his metaphors, let alone comprehend how one idea necessarily connects with another.

As a child, Levee perhaps suffered the most directly from white hate, his mother having been raped by 8 white men who chose the very moment when Levee’s father went out of town to buy fertilizer and new seed for their small farm. His father is later killed and burned after he takes revenge on four of the rapists. But now as a young man, Levee is obsessed—as young men and women should be—with the possibilities that lay before him. He wants to compose and arrange his own music, to play with his own band, all commendable desires. The only problem is that doesn’t comprehend music in the same way that Ma Rainey does:

Moreover, Levee doesn’t realize that he is attempting to find fulfillment in life for the very same reasons as the bigoted whites whom he despises. Music, for him, is not something that needs to be said—coming, as Ma insists from the heart and a voice inside—but rather is a commodity, a route to fame so that can purchase another new yellow shoes or reward beautiful women with presents instead of seeking a true relationship with them. 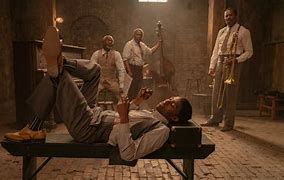 Throughout the film his misunderstandings of colleagues’ art irritates and frustrates the world-weary musicians with whom he performs. In asking them to speak a new language that might appeal to the younger generation, he ignores the fact that he is asking them to abandon their own personal language, the very definition of their selves.

In this young would-be achiever they may see their younger selves while simultaneously recognizing a foolishness of which they warn him time and again. As one of them puts it, to be a fool is one thing, but to want to continue to be a fool is something else. Finally, horrified in recognizing that he has sold his soul to the devil, they attempt to warn him of his doom. In a sense, Ma is the mother to their various versions of the father, who perceive their son as being in terrible danger.

Refusing to heed their advice, Levee suddenly witnesses his whole world collapse. Ma Rainey fires him for insubordination (without even realizing that he  has violated the woman she loves) and Sturdyvant, having promised to record some of the trumpeter’s new compositions, backs out of the deal, paying a pittance for the songs which he later successfully records.

Throughout much of the film, Levee has been trying to find his way out of the back door of their basement rehearsal room without being able to budge the bolt lock. But suddenly, furious with having been fired, the young man breaks through only to discover a small cell-like space surrounded by four walls, obviously a small interior at the center of the building open only to the sky far above. It is, clearly, screenwriter Ruben Santiago-Hudson’s and director Wolfe’s visual analogy of the position in which Levee now finds himself, in a prison of his own making without any exit.

As they pack up from the long day, Cutler accidently scuffs against Levee’s new shoes, as the boy explodes in pent-up anger, pulling and knife a stabing the older man, the other two looking on with the shock of their own expectations. Holding the trombonist in a pièta-like position Levee attempts to rock his victim back to life, while realizing that he has murdered not only a friend but himself. 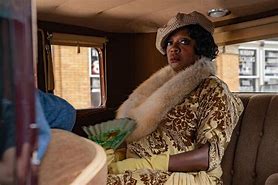 We see Ma Rainey in her car riding back to the hotel looking none-so-pleased after the day of difficulties, as if she knew from the start that nothing good would come of it involving, as it did, those in power.

In short, Wolfe’s cinematic presentation of Wilson’s play is a poignant expression of what it means to be a black person, even a legendary one, in the racist society of the USA. The problem for me, however—and I do see it as a major problem—is that given its very old-fashioned narrative structure, the lovely costumes, the convincing sets, excellent lighting and sound effects, along with the truly brilliant acting here all become merely trappings to a paper-thin series of acts that link up to the work’s thematic pronouncements, aphorisms, and mini-narratives. These billboard-like moments of significance might also be likened to a series of operatic arias threaded together with orchestral interludes foretelling and reflecting upon the “important” announcements of the work’s operatic whole.

While I am certainly not a committed devotee of verisimilitude, within the realist confines of this work it seems almost impossible to believe that a group of men and a woman working together over several years have never before this particular day revealed some of the most important formative events in and philosophical beliefs of their lives. Instead, we quickly perceive, these important “speeches”—which define and give meaning to the character’s actions—are not truly being spoken to one another but are being performed for “us” as audience like so many verbal tableau vivants.

So outrageously artificial are this film’s significant revelations that they might almost be framed and numbered: “Theme no. 1,” “Viewpoint no. 25,” etc with dancers leaping in between them to act out their pain, frustration, doubt, fears, and anger that make up the so-called plot. In fact, such an innovative interventionist mode of theater might have worked better than the casts’ creaking movements back and forth within the ugly brick structure where Ma Rainey’s recording session takes place. I’m sorry to have to say this, but I can think of utterly no reason why the misled Levee should have to kill his fellow band member except to prove to us how racism often effects the violence of a black man against other blacks.

These old-fashioned methods of story-telling just don’t seem to work well in a film these days. If in saying this that I might be accused, like Levee, of demanding the old storytellers abandon their language in order to make their message more appealing to younger audiences, I must remind you I am now an old man who simply realizes that some methods of cinematic story-telling have lost their impact on contemporary audiences.

Posted by greenintegerblog at 12:13 PM