send in the queer

Jane Murfin and Harry Wagstaff Gribble (screenplay, based on the play by W. Somerset Maugham), George Cukor (director) Our Betters / 1933

One suspects that if there was ever one moment that George Cukor came to be defined as a “woman’s” director it was upon the release in 1933 film, Our Betters, focusing on a quartet of dominating American ex-patriot women, Lady Pearl Saunders Grayston (Constance Bennett), Duchess Minnie (Violet Kemble-Cooper), Princess Flora (Phebe Foster), and Bessie Saunders (Anita Louise). With its sharp-tongued dialogic put-downs, its gossipy sub-text, and its naughty female sexual goings-on you might almost describe it was a rehearsal for Cukor’s later women-dominated productions such as Sylvia Scarlett (1935), The Women (1939), The Philadelphia Story (1940), Two-Faced Woman (1941), and Adam’s Rib (1949).

An “openly” gay man (open, that is, to Hollywood not to the public at large) from the 1930s on Cukor became legendary for his Sunday gatherings of Hollywood celebrities which, at the bewitching after-brunch hour, turned into all-male pool parties with young boys and their friends whom he’d met at the gym and streets along with his close cadre of gay cinema friends, among them William Haines and his partner Jimmie Shields, writer W. Somerset Maugham (upon his play Our Betters was based), director James Vincent, screenwriter Rowland Leigh, costume designers Orry-Kelly and Robert Le Maire, and actors John Darrow, Anderson Lawler, Grady Sutton, Robert Seiter, Tom Douglas, and Cary Grant.

Although Cukor was recognized as a homosexual within the film community, publicly, as  Joseph L. Mankiewicz put it, “he never carried it [his homosexuality] as a pin on his lapel”—although it did get him, thanks to Clark Gable’s homophobic disdain, fired from the set of Gone with the Wind.

Cukor also kept a low-profile in his filmmaking by focusing on women, sometimes forceful lesbians such as Katherine Hepburn, but mostly just outspoken females behind whom his male characters often lurked or, as in the examples of Cary Grant and Spencer Tracy, around which the male characters carefully circumnavigated.

Cukor seldom portrayed obviously gay males or lesbians in his films, but using sexually coded language sometimes veered toward LGBTQ expression, the most obvious cases being Sylvia Scarlett, Our Betters, Justine, and, if you stretch it a bit, My Fair Lady. When his female-centered works did not dare move into the realms of the sexual, he pushed his heroines into portraying early feminist figures as in The Women, Adam’s Rib, and Travel’s with My Aunt.

As critics have pointed out, Our Betters might have been a far more successful work had it been directed by Noel Coward with a cast of witty British actors pretending to be Americans pretending to be British members of the upper class. Constance Bennett does a quite admirable job as the innocent young US girl corrupted by British class snobbery and the unspoken conventions of marriages of convenience. But even giving it her Bette Davis-best, Bennett tries valiantly to infuse the dialogue with sparkle by, as Cukor had ordered, by speeding it up and dressing in costumes that demanded movement. 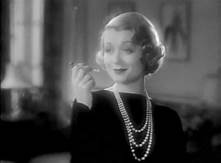 The sparkle never quite ignites, however, into a shower of diamond-like sentences which pierce the heart with their coldness of their in-attention, but they draw sufficient blood that we get the point. These American women, spurned by their cold-hearted husbands, have learned to cope through, as Pearl puts it, “looks, wit, and a bank balance.”

If that sounds cynical, you can hardly blame her. Just married and only five minutes into the film, she overhears her new husband whispering to the woman he truly loves that he has needed to marry Pearl for her nouveau riche US dollars. Instead, of bursting into tears and backing off into some desolate corner of the estate, Lady Pearl decides to gauchely push her way into British society by wearing black instead of white, celebrating her husband’s (Alan Mowbray) long absences with endless dinner parties and library lovers such as Arthur Fenwick (Minor Watson) who also helps  keep her financially afloat given that her husband quickly squandered the fortune for which he married her.

Surrounding herself with US women who, like her, have survived through English marriages of convenience such as Duchess Minnie who is happy to have the money left her by the Duke to surround herself with young handsome loafers such as her current would-be gigolo Pepi D’Costa (Gilbert Roland).

Princess Flora is precisely what Pearl refused to become, the tortured beauty who remains in love with the Prince who has since escaped from her embrace; she gives herself over to working for good causes between her tears and nostalgia for the innocence she left behind in the USA.

Young Bessie, now under Pearl’s tutelage, is awed by her sister’s ever shifting dinner guests, each of them, in her mind, more glorious, intellectually endowed, and well-dressed the last. Having loved the good-looking lug, Fleming Harvey (Charles Starrett) who shows up at Pearl’s doorstep—apparently also a cousin about whose familial relationship with Bessie is never investigated—she refuses to send him away, forcing him to stay on to watch her painful transformation from a pretty US hometown girl into a wit-starved Brit. Pearl quickly arranges for Lord Harry Bleane (Hugh Sinclair) to fall in love and propose to Bessie so that she too can enter the charmed circle of revolting royals.

Along with the pompous gossip Thornton Clay (Grant Mitchell) these characters and Pearl all retire to her country estate to dish all the best of society who make up Pearl’s dinner lists. We never get a glimpse of those endless dinners but, given what evidence we’re given from Pearl’s coterie it’s perhaps better that we imagine their sniggering bon mots than have to witness them.

And I can’t say that Maugham or his screen adaptors offer us much of alternative of conversational tid-bits, unless you find lines such as Minnie’s comment to Pepi who perpetually asks her to marry him—presumably so that he might better be able to share her fortune—“Marriage is so middle class. It takes away all the romance!” to be a howler. Or you think you think that lines like “If one felt about things at night as one as one felt in the morning, life would be a lot easier,” is a brilliant pensée.

Yet somehow Cukor convinces us that Minnie’s endless complaints about Pepi’s inattentiveness, Clay’s “chipper chatter,” Fenwick’s “girlie”-laden exultations of Pearl, and Bessie’s girlish awe of everything around her is worthy our attention. And the beautiful Pearl inexplicably seems to be happy to have them around as company. 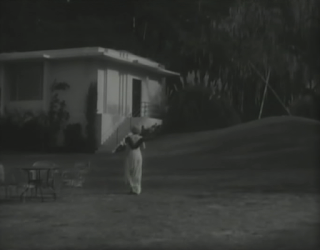 Unfortunately, our perfect hostess accidentally slips on the banana-peel of farce as she reluctantly agrees to meet Pepi in the teahouse. Having just made the connection between Pearl’s visit to a London museum with Pepi’s admission that he has recently visited that same institution, Minnie already suspects that the two engaged in a tryst, and on the lookout observes Pearl sneaking out of the manor to visit the nearby structure, immediately hideing her purse and asking Bessie whether she might retrieve that forgotten item from the teahouse.

Bessie finds the door locked, but what she can see through the window apparently might be the subject of a lurid novel. The girl returns pale-faced and startled, Minnie forcing the poor thing to name the cause of her consternation, thus forcing Fenwick, Minnie, and even the generally unjudgmental Flora to reject the company of their formerly beloved friend. For the first time in this work we witness Minnie as the rapaciously self-centered and mean-spirited woman she truly is. Insisting that Pearl doesn’t have a “redeeming quality,” she declares her break with Lady Grayston and her loafing lover Pepi. Fenwick is stunned by the sexual betrayal. Clay can hardly wait to get back to London to spread the gossip. And Bessie is so deeply hurt at having lost her idol that she can hardly speak.

Into this sour-faced former fan club Pearl comes whirling back from her unfortunate rendezvous, speechless for the first time in the movie, knowing she’s now facing a scandal which may ruin her already shady reputation, having previously, as she puts it, make love to men only front of everyone else.

But before Minnie can even get up enough indignation to call for a car to the train station, Pearl sends one car off to London and the other to a service garage. If she can only keep her guests over the weekend she realizes there can be no scandal since outranged guests always leave in haste.

To make it up with Minnie, however, requires something special which the car returning from London brings back. She, better than anyone, knows when to send in the clowns, that car having carried Ernest (the pansy actor Tyrell Davis) to them, who, made up heavily with extraordinarily large, rouged lips, proceeds almost immediately to try to teach Minnie how to tango. Preening, scolding, and doting upon the silly old dame, Ernest promises her extensive lessons after dinner, an offer—since several times throughout the work she has expressed her desire to learn the dance—she cannot resist. 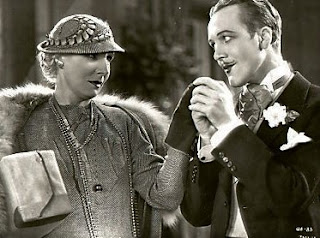 As always, the queer saves the day as the two frenimies kiss and make up, Ernest approvingly looking on to observe: “What an exquisite spectacle of two ladies of title kissing one another.”

Posted by greenintegerblog at 8:40 AM