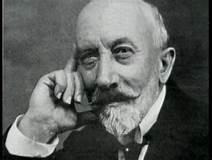 In the late 1890s until the early part of the 20th century French publisher Léon Beaulieu produced a series of kinographs (“moving pictures”) also called Daumenkino ("thumb cinemas”) based mostly on the images of Georges Méliès which might be described as short, short films which reproduced the French director’s originals as flipbooks while further popularizing his art.

The San Francisco Silent Film Festival has preserved, edited, and added music to a great number of these mini-films, a couple of those I’ve seen which flirt with gay and LGBTQ issues.

The first of these, Le méprise begins with what appears to be a woman facing the display window of a street shop with door announcing M. Tetard Modes. It must be raining because the woman stands with a large open umbrella obscuring the back of her head.

Suddenly a man dressed in a white straw hat, a dark coat, and white pants braves the elements as he walks behind her, nearer the camera. Noticing the seemingly attractive female form, he suddenly turns into a masher, planting his hand flat upon her fanny.

The shocked figure abruptly turns toward him revealing the astounded face of a local French parish priest who haughtily turns and walks away, most offended, but in his strut perhaps portraying just a little pleasure in the mistake.

In L’amant supris two lovers meet in a bedroom, undressing and almost dancing in the delight of expectation, she heading him toward the bathroom for a quick freshening up before their lovemaking.

Suddenly from out of nowhere a man leaps into the room quickly speeding over to the man and shooing him off into the bathroom as he follows.

Of course, we cannot be certain for what purpose he has usurped the woman’s intentions. Perhaps he is simply a jealous lover attempting to break up the affair in progress. Yet since the title suggests the second man is himself the “surprise lover,” it appears that he has stolen the man away for his own pleasures.

Once again this is based on a Méliès short film.

I could not find either of these titles listed in a fairly complete catalogue of Méliès’ films, but since the images were attributed to him, they perhaps were films that were lost before they might even have been catalogued. They surely would have had to be made before 1901, because in that year Bealieu died.

Posted by greenintegerblog at 4:59 AM