where does out come to?

The British film Beautiful Thing (1996) is an early model of what I have been describing as the C2 version of the LGBTQ film genre of “coming out” or “coming of age” works. Hettie Macdonald’s film, set in the tough south London Thamesmead Estate, however, has so very much else on its mind, that it seems at times only a rough draft of what in a couple of years would be so more fully expressed in Simon Shore’s Get Real and David Moreton’s Edge of Seventeen.

Actually we never learn very much at all about the two young gay high school students of the film, the shy Jaime (Glen Berry)—who’s mocked and inexplicably labeled as queer by his school peers—and his next door neighbor, Ste (Scott Neal)—a more popular boy at school, but beaten and verbally abused by his alcoholic father Ronnie (Garry Cooper) and his drug-dealing brother Trevor (Daniel Bowers). Unlike the other two films I mentioned, these two boys, although next door neighbors, don’t even seem to know one another well until Ste is so badly beaten that Jaime’s mother Sandra (Linda Henry), who finds the neighbor boy brooding and in tears outside their motel-like apartment, brings him into her own flat and allows him to sleep toe-to-head in Jaime’s bed. 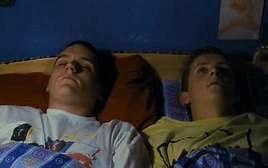 Within a period of two nights the boys are hugging one another closely, having moved into head-to-head buttock-to-balls position, discovering they like each other’s touch. Unlike any movie before or since, these self-perceived straight boys identify startlingly quick as queers (it takes Ste a day or two more to come to terms with the fact), have few difficulties with adjusting to their new identities, and realize and accept the fact that they’re in love, desperate to find a place in which they might cuddle together without mothers, fathers, and brothers sitting on the other side of the thin bedroom walls. Roger Ebert expressed it best with his bemused reaction:

"After they tentatively accept that they are gay, for example, they go to a pub advertised in Gay Times and find drag queens putting on a floor show. (One of the songs is “Hava Nagillah”). Here they realize they are not alone in the universe....I swear, when the movie actually seems to think that once you come out of the closet, you head straight for the pub and live there happily for the rest of your life."

And in this sense, Beautiful Things is not truly a “coming out” film as much as it is an excuse to present the truly weirder (a word of which scriptwriter Johnathan Harvey is quite fond) and outsider figures surrounding them. It may be somewhat dangerous to be gay in Thamesmead, particularly for Ste who several times repeats that if his father finds out he’s gay he will surely kill him—a viewpoint with which all the others agree—but compared with the African-English neighbor girl Leah (Tameka Empson), who to drown out her sorrows and boredom has convinced herself that she is Ma Cass of the 1960s group The Mamas and the Papas; Sandra, an under-educated but street-savvy barmaid who’s determined to open her own pub; and her younger lover  Tony (Ben Daniels) whose identity somehow got caught up in a vortex of time between Tennessee Williams’ The Gentleman Caller in The Glass Menagerie and a hippie who just got back from Woodstock, the bland buggerings of Jamie and Ste seem so utterly normal that by the end of the film we don’t even blink when they wrap their hands round one another’s waists to dance to Ma Cass’s “Dream a Little Dream of Me” in the Thamesmead Estate parking lot. Far more scandalous is the fact that the forever warring Sandra and Leah decide to join them. 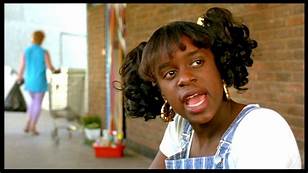 Fortunately, Empson, Henry, and Daniels are such strong actors that when the homosexual story supposedly at the center of this fable disappears into the private fantasies of the film’s incidental figures, they’re able to turn them into powerhouses of eccentricity. Flipping realities, writer Harvey and director Macdonald transform the trio of eccentrics into queers who constantly fascinate us with their shape-shifting relationships with one another in the world in which they all feel entrapped.

The only problem is that while at least Jaime and Ste, except for their easy assimilation of gay life and their deep love for one another—two very different and usually difficult conundrums for young folks—they at least seem to be recognizable as human beings, the others seem a bit like the tubular balloons tied down to advertise products and locations as they sway and shimmy in the wind. If the foul-mouthed, hard-hitting, yet loving and flirtatious Sandra has one foot on planet earth, the other two seem to have been created out of the imagination of a writer who has seen too much TV, listened to too many pop records, and locked himself away with typewriter in his bedroom for far too many years at work on this script.

It’s not that Beautiful Thing is not appealing. Slant Magazine reviewer Eric Henderson begins his look-back on the film with these words:

"Hettie MacDonald’s Beautiful Thing might be the most beloved of all the gay-youth movies released in the late ‘90s, which also included Edge of Seventeen and Get Real (which was an almost note-for-note replay of Beautiful Thing’s blueprint). It almost certainly has the largest cult fan base."

The British Film Institute recently named it one of the best 30 LGBT movies of all time. And I have to agree I was thoroughly engaged throughout by the charm this movie imbued. This film, I assure you, appears on every list of favorite gay films that I have consulted over the years.

Yet, I can’t help but feel that its charm came out of a can gaffed up with so many artificial ingredients that I’m worried if I were to swallow it’s good-feeling taste all over again I might fall down with a gnawing ache in my belly. 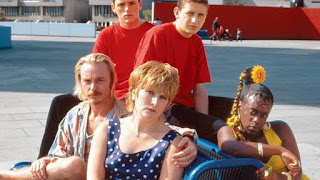 And I have no clue when the credits start to role where the two boys buried deep in the stuff and nonsense of this crowd pleaser might have gone to live out their lives, particularly since I can’t even imagine who they are, what they like except cuddling up, and what they might desire to do when they’ve finished their dance. As for Sandra, well she might be able to manage that new pub well enough to get that couch and all those other things she wants to give her pleasure, but with  whom might she share them? As for Leah and Tony, since they never existed in the real world I can only imagine they went floating off in our memories of their absurd imaginings of the past.

I like fantasy, I assure you, as much as anyone else. But coming out is no fun when there’s nothing out there to go to except a noisy pub or a public park to run and chase each other through. The gay world, fortunately, is not the same as the Gay News.