Something happened to LGBTQ cinema in the last few years of the 1980s that coalesced into a much more racially and culturally diverse and far darker vision in the early 1990s that came to be described as the New Queer Cinema. A great deal of the shift, quite obviously, had to do with the recognition of how AIDS was killing gay people as early as the mid- and late-1980s movies such as Buddies, No Sad Songs, and An Early Frost of 1985, Parting Glances (1986), and Longtime Companion (1989), all films that established the AIDS genre which would continue as a major cinematic concern throughout the following decade beginning with the grand theatrical summaria, Tony Kushner’s Angels in America  of 1991-1993 (not filmed until 2003).

But alongside those dark chronicles of the times—and juxtaposed to what we might describe as an intermediate mode of the second wave of what I describe as the C-2 version of “coming out” films (works such as Whitnail & I, Friends Forever, The Two of Us, and What If I’m Gay? of 1987, Clay Farmers, 1988, and Fun Down There, 1989)—were a group of quirky new films revealing a  far more perverted, violent, and awkward representation of LGBTQ relationships. These films might themselves be characterized as the advance guard of the 1990s New Queer Cinema works: Prick Up Your Ears (1987); Apartment Zero, We Think the World of You, (1988); The Comfort of Strangers (1990); and Poison, My Own Private Idaho, and The Adjustor (1991). Beyond AIDS—drugs, prostitution, violence, sickness, and death had embedded themselves into the LGBTQ lexicon in other ways that heralded a shift in gay filmmaking which permanently matured the queer cinema scene.

One of these early precursors of the films by Cheryl Dunne, Tom Kalin, Gregg Araki, Marlon T. Riggs, and others who would define the new LGBTQ trends was French director Jean-Paul Civeyrac’s 1991 short La vie selon Luc (Life According to Luc).

In a work of just 14 minutes Civeyrac crowds so many significant possibilities that the film becomes enigmatic, as if a long novel had been shaved down into a story of just of few pages. We can read all the signs but it is nearly impossible to definitively interpret them. 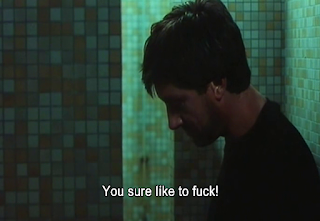 Perhaps we should begin with what he do know. A young man Luc (Jean Descanvelle) is a good-looking, surly male prostitute, willing to participate in nearly any sexual act including kissing, sucking, fucking. and being fucked and perhaps, for enough money, other things. He hangs out, evidently, mostly at the urban stadium swimming pool and in a dark dance bar, picking up his customers carefully and participating in sex without any protection, about which the first partner we encounter warns him. Luc apparently doesn’t care. Certainly, he doesn’t have much of a life outside of tricking. He sleeps in what appears to be a temporary room in his sister and her husband’s derelict apartment, next door to a squalling newborn. And even that squatter’s-like room appears to be in question, since the first time in the film when he returns to count his money, his sister (Sabine Friess) reports that Ivan, likely her husband, wants his key back. 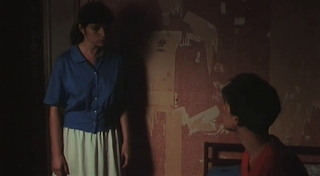 From that same visit we also glean that his mother is in the hospital and that the sister and her husband are about to visit her; he refuses to join them, responding to the invitation with “You must be kidding!” He is resentful that he sister seems to be spying on him and has caught him with his precious money box wherein he carefully lines up the French banknotes with which he gets paid.

We also gather from a man called Serge (Thomas Badek) who demands he paid back for a loan, that Luc has evidently borrowed 10,000. We also know from the scene in which his sister caught him counting this money that he has now earned that amount. But we have no idea why he has borrowed the money  or even if he has any intention of paying it back, although Serge appears to be a terrifying beast who threatens to kill him  if he fails to pay off the debt.

And there is another wrinkle in the story. It appears that Luc has previously had sex with a customer, Bernard (Alain Payen) who has befriended and possibly fallen in love with the boy. Evidently he has been a regular customer of Luc’s because the prostitute is teased by his peers who  describe Bernard as the boy’s sugar daddy or his “old man.” Clearly, Luc no longer wants anything to do with Bernard, the man nonetheless trying to track him down. 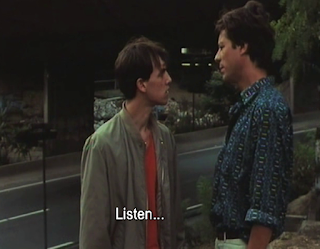 When he finally meets up with Luc, Bernard tries to tell him he has arranged for a job to permit him to quit his job as a whore, but Luc is still disinterested and attempts to rush away. When Bernard finally pays him, as he would for a sexual encounter, just so that he’ll listen, he finally is able to explain that he has arranged for employment. But Luc argues that it won’t be enough; he can make more in prostitution. What amount do you need, Bernard asks? When Luc names the 10,000 amount his friend tells him to meet him at the Stadium at 11:00 that night.

It appears that Bernard is trying to find a way to release Luc from the burden of his sexual activities. But what kind of work might begin at an 11:00 meeting at the Stadium that might pay that kind of money? We can only wonder whether this job involves an even more dangerous activity such as robbery or something worse. 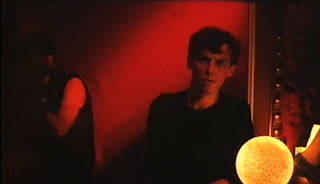 In any event, Luc has no intention of keeping that appointment and, in fact, when approached again by Serge for payment offers up Bernard as the solution: “You want your money. Bernard’s there. Mess him up and help yourself!”

After another sexual connection in a room behind the small dance hall, where we gather that the boy is about to be rather brutally fucked, we soon after observe Luc leaving the place, again meeting up with Serge who tells him, “You’ll never recognize your old man now.”

Luc walks slowly away in a manner which he might imagine represents some sense of sorrow over his betrayal. But frankly, we don’t really know how he feels having so readily sold out the only person who appears to genuinely care about him.

Luc returns to his room, adds in his new bills, and slowly turns all the banknotes in the proper direction, tapping them carefully together before he closes the tin in which he keeps them and, instead of putting it back into the drawer, hides it under his bed. We now perceive that he must have more in that box than 10,000 and that he will be able to keep it all since Serge has been paid through robbing Bernard of the money he had meant for Luc. 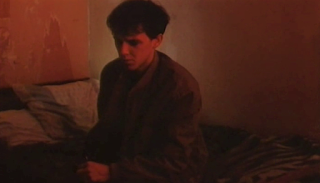 Luc sits on the bed in the darkening light, finally laying down seemingly pondering the situation. The screen goes black.

What does he plan to do with the money? We might imagine that he intends to make his escape from the life in which he has imprisoned himself. But we have no evidence that he has made any such decision or that he even wants to escape.

As for the reason he has borrowed the money in the first place, any answer we might come up with tells us more about ourselves than about Luc. I have concocted a little imaginary plot involving the work’s title, “Life According to Luc,” which resonates for me with the Biblical text of The Gospel According to Luke. The apostle Luke, if you recall, was a physician as well as an artist, which was why the Apostle Luke is the patron saint of doctors and artists. The film’s Luc is certainly no doctor and has no interest in art as far as we can tell. But his mother is ill, in the hospital, and perhaps he has used the borrowed 10,000 to help pay for her medical bills, attempting to repay the loan through prostitution, the only way he might imagine in his poor working-class world to make that kind of money fast.

But even if that were true, how to reconcile his seeming disdain of his mother and his unnecessary betrayal of Bernard remains an enigma. Luc is not a “good boy at heart” but a desperate man willing to do anything to get what he wants, including selling his own body. And unlike many male prostitutes who often insist that they are not gay and will not engage in kissing, in the few moments in which we observe his sexual activities he seems to enjoy them, quite ready to participate in the passion of the moment. It appears he is not at all suffering from his chosen (or even necessary) profession. Perhaps he has simply been seduced through his own previously innocent involvement in making love to unknown men. But that is 11 possibilities away from any evidence. And we have no logical end or solution to this Luc’s gospel. In a sense we know about as much about this Luc as we do about the gentile, possibly Jewish writer of the Book of Acts and his encounters with Christ, a man who was born possibly in Antioch and lived possibly in Troas near the remains of the ancient Troy.

About this Luc we know only that he is a male prostitute who has a bit more than 10,000 in banknotes and intends to keep them. Luc is no homosexual hero even if we might imagine him as not being a total villain.

As I began this short essay, in this movie something is very different from most previous LGBTQ films we have previously seen. Rational explanations for apparently irrational behavior have disappeared.

Posted by greenintegerblog at 3:23 AM