he ain’t heavy, he’s my sister

After a hard and long year of filmmaking, actress Mabel Normand asked her director Mack Sennett for some vacation time in order to travel back East. Instead he awarded her the responsibility to write and direct her own movie, a chance which she simply couldn’t pass up.  That 1914 film titled Mabel’s Blunder was a long forgotten but delightful comedy of office love, jealousy, and cross-dressing mix-ups which ends with two sets of brothers and sisters along with one of the set’s father— all of them involved in mistaken romances.

It begins rather simply with a young secretary (Normand) having fallen in love with her office companion, Harry (Harry McCoy). They have recently been engaged and they’re still admiring the ring he recently put on her finger. However she first has to contend with her boss (Charles Bennett), who also is attracted to her, and who just happens to be Harry’s father. 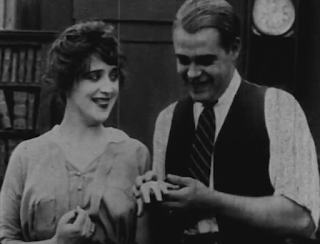 The boss calls her in for dictation, flirting with her in the process and demands she stay late to type up the letter. Meanwhile Harry has been asked to read and answer a pile of his father’s correspondence.

When the boss leaves, Mabel decides she’s going to leave early as well, but in the process sees a woman (Eva Nelson) about to enter a private door to the boss’s office where Harry is now working. Amazed by what she witnesses, she startles the stranger who decides to enter through the front office door, the secretary unsure of what to make of the late afternoon visit.

Mabel pauses, debating whether or not to return to the office before deciding against it, but finally being unable resist, returning to peek in to see what has happened to the unexpected intruder. What she see’s outrages her, Harry holding the woman in his arms.

Throughout this film, Normand keeps look back on her finger to remind her of her love while at the same time generally moving forward with compulsive actions of jealousy that might make the later Lucille Ball seem an amateur schemer by comparison. 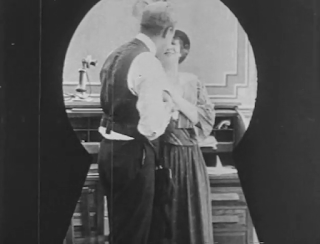 Once she has witnessed the woman enter the sacred domain of the inner office with her fiancé, she cannot refrain from peering through the keyhole to discover the two in what appears to be the middle of a kiss. Outraged by her lover’s behavior is pulled between her disbelief and revenge.

At that very moment on the street below Billy Bronx (Charley Chase), Harry’s longtime friend, pulls up, calling over to another young man sitting in a car just outside the office building (perceiving him evidently as someone’s chauffeur) to ask him deliver a message to Harry, which we later discover reads “I am giving a party at La Ramada. Be sure you come.”

The “delivery boy” just happens to be Mabel’s brother (Al St. John), probably having arrived to pick up his sister. Observing her peeking into the keyhole, he teases her and explains that he’s been asked to pass on a message to Harry. 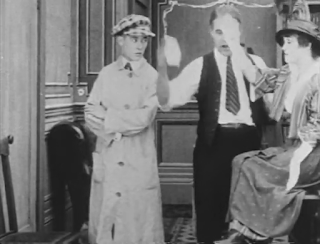 Delivering it up, he observes that Harry is delighted with the invite, elated to be able to take his new lady friend to the event.

Hearing the news, Mabel quickly cooks up a scheme. She and Harry change costumes as she, pretending to be a driver, chauffeurs Harry and the woman to La Ramada, all the while attempting to comprehend the outrageous relationship between her lover and the unknown woman. Dressed as a male driver she dare not enter the La Ramada grounds, but stands outside, her anger growing with every passing moment.

Inside the outdoor restaurant grove, Harry has introduced his woman companion to all the men, who immediately turn their attentions toward her, including Billy. His companion, in turn, grows also jealous about the intruder that she leaves the event to commiserate her fears with the waiting Mabel dressed in male garb.

In another twist of events, meanwhile, the boss has returned to the office to get some papers only to discover Mabel (actually her brother in her garb) still there, and demands she join him for dinner at—where else?—La Ramada. En route he is very attentive to his secretary, now wearing a vail, delighted to have been able to abduct her from the confines of the office, without evidently knowing that he has also stolen her from the arms of his son. This is one of the few times in cinema history when we might describe the situation by saying that the father has fallen in love with his son’s lover’s brother. 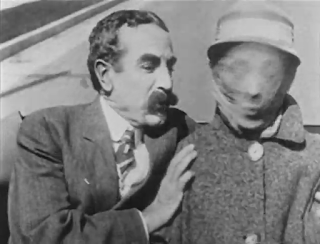 Back at the party, Billy misses his companion, discovering her with the commiserating arm of a driver (Mabel) on her shoulder. Outraged, Billy begins to slug it out with the chauffeur. Harry and others soon hear the fracas and rushing forward watch the fight; but when Billy pulls off his opponent’s hat, Mabel’s long hair pours out from underneath, Harry recognizing his lover, shocked by her presence as he suddenly realizes that  it was she who drove him to the event. Stumbling back into the restaurant grove the entire party now encounter Harry’s father sitting with an unknown woman. Upon seeing his secretary standing before him, the boss unmasks her brother, as Mabel points to the villain of the piece who is now apparently delighted to encounter the elder man in their presence as she runs to hug and kiss him as well. Beyond words, Mabel attempts to make some meaning of the confusing situations as Harry solves the riddles with three words: “She’s my sister.”

Normand’s work is a rather visually and narratively complex tale for the early talkies, revealing her evident talent not only for acting but writing and directing, later applying those talents to scripts in which she acted with Charles Chaplin and Fatty Arbuckle.

Normand’s career suffered, however, after she became involved in two murders. In 1922 actor and director William Desmond Taylor was found dead in his bungalow, shot in the back while wearing a locket with a picture of Normand inside. He had long been in love with her, having attempted to help her kick her cocaine habit. Moreover, she was the last person to have seen him the night of the murder. Eventually, however, she was found innocent of that crime, although the real murderer was never uncovered.

In 1924 Charles S. Dines was shot by Normand’s chauffeur using her pistol. Because of these events and a recurrence of tuberculosis, Normand retired from the screen in 1926 and died four years later at the age of 37.

Posted by greenintegerblog at 5:07 AM