a day at the beach

A young man, Pedro (Filipe Abreu) is seen during the credits as returning home in early morning on his motorcycle. In the kitchen he pauses for a drink, overhearing his mother having a conversation with someone on the phone with she is attempting to see, promising to keep close to her phone to await his or her calls. 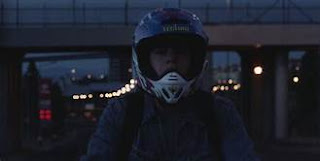 He heads to the bathroom, pissing as she again enters, adjusting her swimsuit in the mirror and complaining once more of his tardiness for not even having showered yet. Meanwhile, she asks him to retie the suit’s string in the back. “Do you like it?” she asks.

But when they’re both now dressed for the beach she suddenly cannot locate her cellphone, and proclaims she can’t leave until she finds it. Sitting in a blue lounging chair, his eyes closed, the boy appears to be exhausted and clearly disinterested in whatever they’re planning to do at the beach. 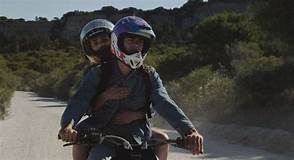 In the next scene the boy is again driving his motorcycle, his mother riding shotgun holding him closely. As they stop at the beach, his mother steps down from the bike moving forward   immediately to their supposed definition, while Pedro looks off in the direction of a man who has just walked behind him. His mother trudges off to the sand dunes, while her son follows leadenly after. She calls out, “Over here,” and walks down the dune to the open strand. In the next frame they are both laying out on the beach on blankets, Pedro fully-clothed, she in her swimsuit, side by side, as if they were a couple of lovers.

After a long pause, she sits up, calling over to him, “Pedro. I think we’re too early.” And then adds, “We should have come in the afternoon. I prefer that. I wonder why we came so early?”

A handsome nude man (João Villas-Boas) comes running from the water back to the beach, picking up his towel, and drying off. He pulls on his bikini, openly adjusting his crotch, and walks over the couple to ask for a cigarette. As he carefully eyes the boy, his asks if they have a lighter. And it slowly begins to dawn on us what is soon to happen, as Pedro looks intensely back at the man, takes out a cigarette and waits for the stranger to light it, which he does with his own cigarette. 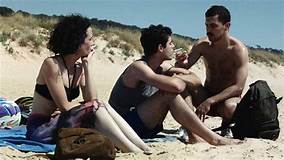 Suddenly the man lifts himself out of his hunched position, says goodbye, and begins to walk away, both mother and son starring back at him as he moves away. When they finally look back, she asks her son, “Did you see the way he looked at me?”

Pedro puts on his shoes, stands, and announces “I’m going for a piss.” By now, however, we can guess where he is headed. To confirm our suspicions, the camera observes the man pausing in his slow moseying walk, grabbing his crotch and moving forward again, as Pedro comes into view behind him. After trailing him through heavy brush, the boy meets up with the hunky stranger near the shade of a tree as the two come together, Pedro pulling down his shorts as the man leans into him for a kiss, the pair soon moving their hands across other parts of each other’s bodies.

When Pedro saunters back some later, tossing off his shoes, his mother, now standing, asks him if he managed to “pee.” She goes in for a swim, he begging off joining her as she requests. She asks once more and he pulls off his shirt and joins her, both of them soon frolicking in the heavy waves.

Soon we observe the mother standing, looking over to the waves where Pedro continues to play. A very handsome man suddenly appears behind her and kisses her neck. You didn’t call, she mumbles, you stood me up, he replying something like “But I’m here,” lines that might almost be out of a romance novel.

When Pedro begins to return to the beach he sees the man with his mother and waits for a while before continuing, the other two having moved off out of view. The boy returns to their original spot, lays down, and finally falls asleep, certainly by this time utterly exhausted. When he awakens there is still no sight of his mother.

In the last shot of this Portuguese short, we see him on his motorcycle as in the very first scene, presumably returning home again, as if everything that we have just witnessed might be ready to repeat as in a loop tape.

We are still left with several questions however. Is she playing pimp to her son or if he serves as the lure that draws men to her? More likely, they both just seek out their sexual pleasures together, as a kind of mother-son team duo who enjoy witnessing the others (surely numerous) that come in and out of one another’s lives. If nothing else, we now no longer wonder why she so desperately needed her phone.

Perhaps how we interpret the scenes we have just witnessed say more about us as voyeurs than about the actual relationship of this sexually active mother and son. Yet, I can’t help perceiving this as a 21st century positive spin on Suddenly, Last Summer in which the all consuming flesh isn’t taken quite so literally.

Posted by greenintegerblog at 1:32 PM