between tragedy and camp

Throughout the 1940s-1960s, when it was the dominant expression of how fiction and poetry should be read and written, Robert Penn Warren’s and Cleanth Brooks’ New Critical Theory argued for the use of natural, realistic images, actions, and symbols which enacted by and within the lives of characters objectively revealed without authorial intrusions created works that most profoundly effected readers. Short tales, in particular, had a rising and falling action, ending usually in a cathartic experience that revealed both to the character and the reader the significance of the proceeding events. Fiction was driven primarily by character and plot in a rising and falling pattern that resembled the fluctuations of human thoughts and actions. Structure was primarily linear, paralleling the hero’s revelations as he moved through the experiences that defined the work of fiction. Longer works, accordingly, were defined primarily as romans or romances (translated into English as “novels”) that were centered on an individual character’s transitions through the objectively presented mimetically presented landscapes.

With its often desperateness to speak of alternative truth, to reveal LGBTQ life as something of moral worth, its anger and outrageousness of the outsider, its assimilation of comic responses to societal exclusion, and the resultant campy expression of reality through winks, nods, and complexly coded messages, homosexual, bisexual and transsexual narratives fortunately seldom obeyed these critical restrictions, creating a far more fascinating plethora of voices, ideas, and realities than realist novelists and short story writers could even imagine.

It’s not that all fiction writers beloved by Warren and Brooks wrote nothing of value: among the New Critical heroes of the 20th century were Henry James, William Faulkner, Ford Maddox Ford, Virginia Woolf, D. H. Lawrence, Marcel Proust, F. Scott Fitzgerald, Eudora Welty, and the early works by James Joyce to name only a few.

Very few of the LGBTQ cinematic works I have reviewed in these volumes, however, would have met with critical approval of the New Critics. Their prioritization of sexual identity alone would likely have disqualified them from the New Critical pantheon, let alone their often soap operatic-like plots filled with radical and unexpected events and characters so outrageous in their actions, words, and demeanors that for many ordinary observers they might appear to be unbelievable. Filled with directorial intrusion, moral outrage, outré costuming, nudity, and perverse humor, LGBTQ filmmaking was the anathema of New Critical Theory and helped in tumbling its academic walls.

Imagine my surprise, accordingly, after watching a little LGBTQ gem by Matthew Puccini titled Lavender from 2019. This film was so very unobtrusive in its expression that, at first, I shook my head it a brief whirl of confusion, pondering for a few seconds what I had just seen really meant—so used had I grown to having the directors of these films make it quite clear what they were saying, despite the complexities of their works. So little of the film’s meaning had been conveyed through dialogue that a viewer not used to having characters argue out their ideas might have wondered what actually happened by film’s end. 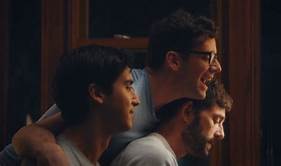 The director never reveals how the two met the boy or even tells us precisely how intensive their relationship to Andy is (the film’s “Kickstarter” synopsis suggests they met on the computer dating site Grindr), but given their gentle hugs and kisses, their general concern for him, and the fact that he is sleeping over at their house each night, we know that Andy has been made to feel loved and comfortable as an important figure in both their lives.

Their stylish apartment with contemporary art of the walls obviously intrigues the attractive kid of apparently biracial parentage. What is clear in the way he stares into the paintings and objects of their rooms is that he has entered a privileged white world he previously could not have imagined and that, along with their clear adoration of him, he is a bit overwhelmed.

Moreover, as anyone can imagine in such a situation there are tensions that arise simply given the situation. These are only hinted at in Puccini’s film, but a scene in which Andy wakes up early in the morning to find himself lying a bit apart from Arthur and Lucas asleep in an embrace says a great deal about the fact that, although he shares their physical love, he still is kept apart from their far deeper commitments one another. He brushes his teeth, dresses, and returns to his own apartment via taxi with a somewhat troubled look upon his face.

It’s strange after all of these years to suddenly realize that I myself have been in two such polyamorous relationships (I had no such name for these situations in those days) when I was 20 or 21 and was living in New York. And I recall that although one felt the responsibility to like both of the partners equally, there was in both cases one who was more attractive and, quite frankly, sexually active. And although I went out of my way to balance my attentions, I am sure it was quite obvious to the other which of them I preferred. Did they resent each other or argue after my departures? They never needed to tell me, in either case, when it was time for me to move on.

Something similar happens to Andy when he brings Arthur a birthday present of a program for the play The Changing Room signed by the entire cast; he awards the boy a deep kiss, followed immediately after with Lucas wrestling him into bed as he fucks the kid alone.

Tensions, we recognize, are rising when the boy hears the couple quietly speaking in the next room, although we hear nothing that is said. And the next morning when he awakens both men have risen earlier. After a shower, he packs up the few possessions he has in their apartment and prepares to leave what we quickly recognize will be permanently, he kissing both and congratulating them for what they have, as they, rather teary-eyed, watch Andy walk out the door. Clearly they have told him that the time has come for him to go. Yet the viewer has to fill in the blanks, to imagine what has gone on in the background. Everything is presented without directorial determination of what we make of the events we have witnessed as uninformed voyeurs. 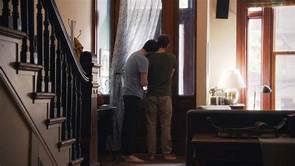 Even more surprisingly, when Andy returns to his apartment we discover that a cute boy is lying in his own bed. At first he turns away from the sleeping boy, but when the friend mutters some a greeting, “heh,”  he turns toward him, embracing him into a hug. Obviously, his experiment in love is over and he can now return to face his own budding relationship, hoping to build it into the kind of rich marriage he has just experienced with Arthur and Lucas.

Puccini himself seems to indicate his awareness in how his oblique, well-crafted tale lies somewhat outside of the usual constructs of LGBTQ filmmaking. He sites Andrew Haigh’s Weekend and Ira Sachs’ Love Is Strange as naturalistic precedents as well as work by John Cassavetes and the Dardennes brothers. Puccini describes his desire to give the work significance through “small, seemingly insignificant but carefully constructed moments.” But his final statement I would argue almost fully embraces the “New Critical” values which I have described above:

Lavender will strive to present a queer story that is still so rare:

occupying a space between camp and tragedy, where quiet

naturalism and tender romance, no matter how brief, are enough.