I believe it would be mistaken to describe Paul Wegner and Stellan Rye’s 1913 film The Student of Prague as primarily an LGBTQ movie. Yet I would also be remiss if the didn’t include it in my discussions in My Queer Cinema volumes since it contains so many elements of the important tropes in queer filmmaking, theater, and fiction.

The plot of this 1 hour and 25 minute-long film is rather simple. It begins in the university at which Balduin (Paul Wegener) a student is studying. He is known by his companions as one the finest of swordsmen, as well as the wildest young man in the student body. But at the point we meet him Balduin is anything but a wild, drunken lout as he sits alone, refusing to participate with his fellow students who are drinking and celebrating with the women servers and a Gypsy girl who sings and dances. The student has come to the end of his finances and is pondering what to do to raise the money upon which he depends to support his excessive behavior.

Out of the proverbial blue, a coach arrives bearing a shriveled-up, scowling being who taps the unhappy boy upon the shoulder vaguely whispering in his ear something about a large inheritance that may be in store for Prague’s finest fencer and most unruly scholar.

Balduin rebuffs the strange man, jesting that he’d do better to bring him “the luckiest ticket in the lottery or a doweried wife.” The old man chuckles and moves back into the shadows in which so many of the film’s characters spend their time lurking, matching the dark scowl of worry that remains on the student’s brow.

Meanwhile, the local Countess Margit Schwarzenberg (Grete Berger) is off with the hounds, meeting up with her cousin, Baron Waldis-Schwarzenberg (Fritz Weidemann), who once again attempts to court her, she rejecting him, repeating that since her father has declared she must marry him she will obey, but that it has nothing to do with love. She pulls her horse quickly away, and the horse, obviously sensing the jolt, runs wild through the field, ultimately throwing her into the local river.

By coincidence, so it appears, Balduin finds himself at the very same spot and rushes into the waters to save her by pulling her ashore. Her hunting companions and the Baron, arriving on the scene, award the boy a purse of coins for his good deeds.

In fact, the student has been compelled to visit the scene by the evil sorcerer, Scapinelli (John Gottowt), who he had just previously rejected at the beer garden. Now, taken with the beauty of the Countess, Balduin almost immediately becomes involved with her and her family, visiting her father the Count’s castle to inquire about her condition. He is forced to depart almost immediately, however, when the Baron arrives with a far more ostentatious bouquet of flowers than the simple garland he has purchased from the Gypsy.

Distressed with his still relative poverty he is tempted once again by Scapinelli, inviting him into his room to discuss his promised “inheritance.” Displaying his magical powers with a few quick sleight-of-hand tricks, the old man asks him to sign a document which will sell him all the contents of the boy’s spartan room. Balduin looks around the dreary place and, seeing nothing of value, gladly sells the contents of anything the old fool might desire.

Scapinelli quickly pays him with a shower of gold before, looking around the room spots the student’s reflection in the long mirror, and calls forth Balduin’s image, walking out the door with the student’s shadow self. 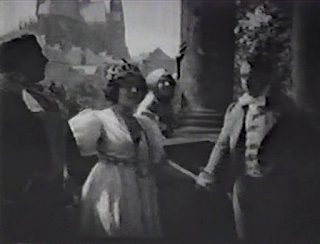 Quite horrified with what he has just witnessed, but also a bit bemused and even more delighted by his new wealth, Balduin quickly moves forward with his attempts to court the Countess, the Gypsy girl, now clearly in love with the student herself, following him to the castle and stalking him for most of the rest of the film.

Countess Magrit is rather charmed by his attention, and even agrees, over her own doubts, to meet him the next day in public spot near a cemetery. She finds herself falling in love with the boy, but each time she encounters him he is stalked not only by the Gypsy girl—who neither of them even seem to notice, suggesting perhaps her invisibility because of lowly social status—but by Balduin’s double, a confounding phantom that so terrifies them both that they break off their encounters in each instance.

The Gypsy girl, meanwhile, meets with the Baron to tell him of Balduin’s rendevous with Magrit, and in anger the fiancé confronts the student, rashly challenging him to a duel with swords without realizing Balduin’s skills. The Count, terrified that Balduin will not only kill his daughter’s future husband but in so doing will kill off the last male heir of the von Schwarzenberg family, meets with the student, pleading with him to spare the Baron’s life. Reluctantly, Balduin agrees. But as the intertitles are quick alert us:

The dead he swore

Horror-stricken by witnessing his other self kill the challenger, Balduin rushes off. When he recovers, he attempts to visit the Count to explain the situation, but the gates are closed to him. Desperate to declare his lack of complicity with the Baron’s death, Balduin finds a ladder and climbs into the room where Magrit sits reading. Upon seeing him, she turns away in anger, but as he attempts to explain his innocence she gradually is swayed by his declarations of love. When the student attempts to further prove his innocent by demonstrating in her mirror that he has no shadow, she backs off from him, more consternated than she has been previously, and at that very moment his double reappears. Balduin, now abandoning any hope of wooing the Countess, runs off in a kind of frenzied flight through the woods of the estate and the shadowed streets of Prague, turning frequently back to make sure that he has lost sight of his double. Out of breath, he finally reaches his room, checking the windows and finally reopening the door just to certain his other self has not followed him home. 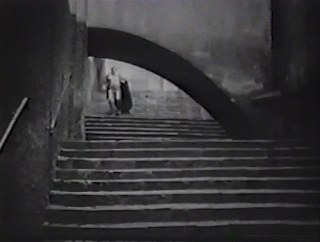 Finally, infuriated with the situation, Balduin opens a box and pulls out his firing arm to await the phantom’s arrival. When it appears in his room smiling at him as it strides forward, Balduin shoots and it disappears. A few seconds later, the student himself falls to the floor, blood gushing from his stomach as he dies.

The story is based primarily on the Edgar Allan Poe tale “William Wilson,” but obviously it incorporates elements of Faust (in some British theaters it was titled A Bargain with Satan) and Robert Louis Stevenson’s 1886 fiction The Strange Case of Dr. Jekyll and Mr. Hyde, along with references to Aldred de Musset’s poem The December Night.

In each of these cases, a being is troubled by the existence of a mirror-image of the self who separated from the original being works against the other, sometimes for good and but most often for bad, ending in the destruction of both the body and the soul which the two beings symbolize.

In selling himself for wealth and social status, Balduin has destroyed the carefree, joyous young student he once was. The two aspects are simply incompatible, since the joyful, goodhearted boy cannot coexist with a scheming and plotting being determined to have everything previously unavailable to him. And in this sense the Gypsy girl and the Countess Magrit are also doubles, one representing the birthright of the student Balduin, while the other symbolizes what by birth lies outside of his reach. On one level, accordingly, the story is really about a man who has lost his soul in his search for being something other than he truly is, the double standing in for the avaricious and womanizing adult he would become, and for which, accordingly, must destroy the youth.

But on a far more profound level, this tale tells us something else about the conflicted self. The world to which Balduin aspires is clearly the normative vision of the wealth and heterosexual marriage promised in every culture’s version of what US citizens describe as the American Dream. But inside himself it is clear that Balduin cannot embrace that. There is a part of him that obviously detests the very idea of marriage and the heterosexual hegemony which he subconsciously works in various ways to resist.

If there is no obvious homosexual interest in this tale it is because Balduin’s true love is the self, the image in the large mirror that without him even able to recognize it lies his most treasured possession. At the very heart of this tale lies the vision of the self that Dorian Gray first encounters  in the portrait that Basil Hallward paints of the beautiful youth. In Dorian’s devotion to that idealized self he must destroy almost all the other individuals he meets since they cannot live up to his own image and, moreover, in order hide the fact that he is so infatuated with himself. This, in turn, is merely another version of the myth of Narcissus. And it is no accident that early psychologists and medical practitioners once defined same-sex love as being a version of infantile narcissism. 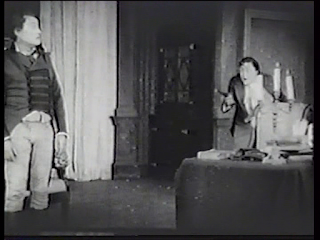 It is as inevitable that in stabbing the canvas on which his now corrupted image exists, Dorian must die just as Narcissus must drown in his attempt to kiss the beautiful image he sees before him in the sudden ripples of the formerly still pool of water.

Deep in the heart of homophobia is the belief that loving someone of the same sex is an outward manifestation of one’s ability to love oneself—a terrifying concept for those inflicted, as most homophobes are, with extreme self-loathing, being individuals far too often unable to accept their own homosexual fantasies.