The problem with the 1969 film about lesbian lovers, That Tender Touch, is not its dreadful script—

Terry: It had to happen some day, this thing that we have

for each other that neither of us could explain

had to come to an end sooner or later.

Marsha: Are you trying to tell me that’s all over now? — 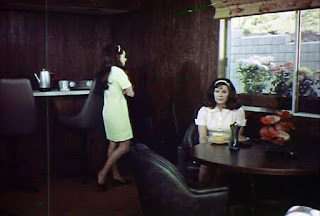 nor the film’s performer’s inability to act (as Marsha Prentis, Bee Thompkins demonstrates the suffering she is going through over the breakup of her relationship with Terry Manning mostly by flopping her body across and bed, grimacing, and contorting her face to look like she was Joan Crawford horrified for the fact that she was about to vomit), nor even the atrocity of the movie sets (dark paneled rooms featuring brown Naugahyde chairs and bar stools shoved up against a shelf so narrow that it can barely serve as a shrine to a pot of coffee and suburban houses decked out  with kitsch hotel lobby furniture sunk into layers of puce shag rugs), nor even the pointless camera tracking that seemingly has a fetish about the “no vacancy” sign of the Darla Arms Furnished Apartments, to say nothing about David Saxon’s and Han Haller’s hard to listen to arpeggios of the movie’s theme song.

No, the real problem is that it was written and directed by a male, Russel Vincent, who could not decide whether to make a “Dykesploitation” film, a campy tribute to Mark Robson’s Valley of the Dolls (1967) sans the desperate divas and their drugs (although keeping the alcohol), a homophobic warning to women who dare to fall love with members of their own sex, or a suburban soap opera exploring why so many women these days turn out to be dykes with the presumption that they had simply hooked up with the wrong guys.

Fortunately, he clearly didn’t have enough financial backing to make any of these films, teasing us with just enough of each genre that it might seem he had a method to this mad effort to entertain us, whoever us might be—men who are intrigued by women who are bi-curious, guys who are disgusted with the idea that gals lick pussy, or gay boys and giggling sapphics who see the whole thing as simply a lark. Oddly enough, because of its total inability to comprehend who lesbians really are, Vincent brushed up on the edges of some interesting ideas about same-sex love in 1969 before it was even safe to say the L-word let alone to think about what it might have meant.

Predictably, Marsha, previously married, meets Terry (Sue Bernard, of Russ Meyer’s 1965 exploititive flick Faster Pussycat, Kill! Kill!) quite by accident at the airport on the day, so the plot suggests, when her parents were killed in a plane accident. Taking a liking to the poor confused and now abandoned kid, Marsha takes her home and cares for her like she would a younger sister. Over time as she arranges her life around the adoptee, comforts her when she gets raped on her first two heterosexual dates, and arranges for her to work in the hair salon where she is employed, she discovers, inexplicably of course, that she’s fallen in love with her charge, not only spiritually but physically, surely a result of that tender touch she’s provided after Terry’s brutal encounters with manhandling. Without even thinking Marsha has grown into the role of the matron of the little prison house of love she’s created for her “friend.”

Yet all’s well in their bicycling and balloon holding picnics until the camera hugging Ken-doll, Ken Manning (Rick Cooper) sees Terry as his perfect Barbie. Since he’s into playing with dolls himself, he dresses her up like animals and shoots her like a pole dancer on the Santa Monica Pier merry-go-round. 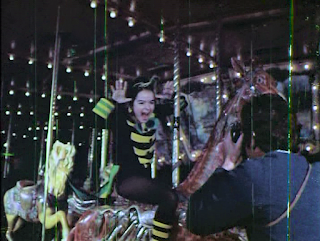 Matron  Marsha doesn’t like that one little bit, and before she knows it the two have having the discussion I quote above.

All of their past is revealed in flashbacks, while the true “action” of the film takes place in the plush suburban development of the Roxbury Estates to where Ken and Terry had hoped to escape from Marsha’s loving clutches. But Marsha in full business suit regalia reappears during the midst of a lovely heterosexual bash at which, without really trying, Terry’s former squeeze bewitches the Manning’s maid, a neighbor lady, and her pubescent daughter, all ready to jump into bed with Marsha at the first wink.

But Marsha is having none of that. She still loves Terry and has come to claim her prize, despite the younger girl’s protests that despite the love she still holds for her, and the longing for Marsha’s tender touch she still feels in Ken’s loving arms, she’s now a happy hetero. As she puts it straight out: “I love you Marsha, but it's wrong!"  A little earlier she declared, “I just want to be normal.”

It still doesn’t sink through the bouffant atop Marsha’s libidinous head, as she almost tries to rape her former bedmate while the woman’s husband, just as the insistent postman, rings twice before taking out his keys to carry in the grocery sacks. But eventually Terry, finally having come to terms with the fact that she and Marsha have actually been lesbian lovers, sets her right, insisting that although she’ll never forget her tender touches a little manhandling never hurts, particularly when it comes from the gentle Ken, who’s been so very patient in letting her make up her mind about the whole mess.

If there was ever a perfect example of Vito Russo’s argument that in most films that portrayed LGBTQ characters the queer had to die, it’s this film: taking up the lipstick tube to the guestroom mirror, Marsha, in perfect Palmer Method cursive penmanship writes: “I love you Terry. You are now free,” before jumping into the Manning’s swimming pool to drown.

What, strangely, this mess of a movie does reveal even though its Kabuki-like figures do not very subtly reveal it, is that lesbians also have deep feelings of love and pain upon losing their companions. They too have beating hearts that can be broken, their skin scratched even by a tender touch.

Posted by greenintegerblog at 11:20 AM