Poor Stevie (Conrad Crawte), a young 14-year old schoolboy growing up in a more than unattractive suburb in New Zealand at his Aunt Irene’s (Heather Pit) home, his parents having recently separated. Steve is of the age when pimples pop up every day along with a certain appendage aroused, quite expectedly, by the attractive TV studs, underwear models, and local truck drivers Stevie seemingly encounters from moment to moment in the otherwise bleakly ugly landscape he has come to call home. 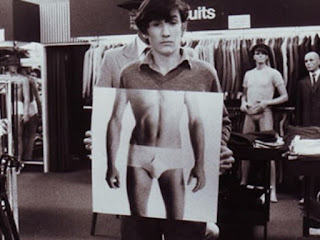 Even worse, the school dance he coming up and he still doesn’t own a suit. His wayward mother (Heather Lindsay)—decked out in plastic white go-go boots, matching purse, short dress, and  a semi-beehive hairdo to appeal to the unappealing men who might be interested in a woman of her age attired so to hide it—wants to rent him a suit, pushing and pulling the kid during her lunch hour into the local Slaters men’s store, where she holds up a pair of jockey shorts to him to make sure they fit, tries to flirt with a heavy-set clerk who’s clearly more interested in her seeing son in his undies than in hearing her blather, and talks her son out of the paisley-patterned suit in which he imagines he might be able to woo a handsome super spy, deciding for him, instead, upon the more standard mouse-gray tux with a front-button pleated white shirt, topped with a red velvet bowtie so ugly it even angers the normally complacent boy. Mum is so furious by his complaint that he never gets what he wants that she declares she’ll take back the suit.

That night Stevie’s drunken father (Martyn Sanderson) calls up telling him he wants to rent him a suit. The boy is too embarrassed to tell him of his mother’s actions since, as he puts it, “it might hurt his feelings.”

And he too takes him to Slater’s despite Steve’s pleading insistence to go somewhere else. It is to Slater’s they go: “Now look, we’ve always gone to Slater’s. I was in the war with him!”

The father introduces his son directly to the owner himself, while the boy begs the other clerk to remain silent through his facial expressions. This time it’s a dark blue plaid suit, no better looking but at least a bit less ostentatious, the difference, in fact, between his dad and his mum. Steve’s father is what you might describe as a brutally no-nonsense guy.

But now, of course, his old man wants to see him in that suit just before the dance, a near impossible request since Steve has to stop by his mother’s to put on her rental suit before the same event. As Steve himself describes the impossible logistics, he’d have to be a long distance runner to be able to get to both places, a half-hour distance apart, in order to please both of them.

Singing as he brushes his hair for the event, the slightly giddy boy mutters “Girls will be boys and boys will be girls, it’s a mixed up muddle of shit in the world....” Having chosen a cave-like interior near a train trestle as the mid-spot from which to sprint between his father’s house and his mother’s motel, Steve arrives at his father’s in the midst of him laundering. The scrawny kid puts on the loose-fitting suit with the father’s rather grudging approval. But it’s clear that they have nothing in common, the father watching his TV playing violent scenes from the Viet Nam War while he probes his son whether or not he’s got a “nice little Sheila lined up.”

To salve his conscience, his father hands him a couple of bills and insists upon giving him a “lift to the dance,” where he realizes there’s no one there yet, his son lying by responding that “they’ve asked me to come early and help set up the tables.”

On the run again Steve arrives at his mother’s motel room. His mother dressed in a white negligee as she prepares to go out with her current male friend, greets Steve warmly with a “sweety-pie” hug, he suffering her intense embracement of recompense for her neglect. When she finally turns on the lights he discovers her in hair-curlers having apparently just dyed her doo.

She finds his suit “gorgeous,” gushing over her suddenly grown-up son. When he asks when he might come and live with her, however, her answer is “I don’t know. It’s difficult,” meaning clearly never, things being so indeterminate. It’s apparent, moreover, that she likes being single and available again. She too hands him her last fiver. The phone rings, obviously her current boyfriend calling, as she signals goodbye to her son before he uncomfortably makes a dash for it.

We know that at this final school dance, the US equivalent of the Prom, Steve can never discover what he’s looking for. Boys didn’t meet boys at, nor girls take girls to such dances in 1985. “That night, I decided not to go to the school dance,” Steve reports through a voice over. “Instead I caught a bus into town and went to the pictures. And in the warm black, under the shimmering projected light, I met a tall dark stranger and there my real romantic life began.”

It’s a fairly long ways from this gentle satiric half-hour film to his 1995 classic erotic fable of love between a Māori and a Pākehā warrior, Twilight of the Gods (1995), and in between he took amazingly different routes through his and Peter Wells’ AIDS drama A Death in the Family (1987), their feature-length melodrama Desperate Remedies (1993), and their “coming out tale” of boys in the 1960s, One of Them! (1996). Together what these works reveal is that Stewart Main and writer Peter Wells represent some of the most talented of LGBTQ filmmakers, of the stature of Canada’s John Greyson, Spain’s Pedro Almodóvar, France’s François Ozon, the US’ Todd Haynes, and others.

Posted by greenintegerblog at 3:04 PM