William A. Seiter’s film of 1933, Diplomaniacs, a work created around the then popular comic team of Bert Wheeler and Robert Woolsey is a vaudevillian potpourri determined to slice every last shred of politically correct nicety. In Joseph L. Mankiewicz and Henry Myers’ culturally and racially diverse list of targets: Indians, Chinamen, Frogs, Fags, Dykes, Krauts, and Little Black Mammys all got rhythm enough to toss out stale tag lines, jokes, and puns. So many arrows are shot into the air enough of them actually land everywhere, giving the sensation of being bombarded by “sex of one and a half a dozen of another.” I think you comprehend my predicament.

Let us just say that barbers Willy Nilly (Wheeler) and Hercules Glub (Woolsey) have opened up a shop on an Indian reservation of the Oopadoop Nation. Although they had wanted to find a place that didn’t have many customers, they hadn’t counted on the reality of  the pale man’s myth that Indians don’t grow whiskers, therefore going broke. 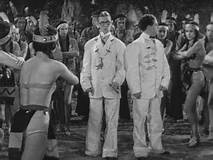 Fortunately the Oopadoop Nation, wealthy from their oil wells, are willing to pay Nilly and Glub millions of dollars to represent them at a Geneva Peace Conference, guiding the waring nations to peace. To celebrate the occasion they dance a little number that makes Busby Berkeley look like a minimalist while squaws and braves alike sing a mix of Pig Latin and baby talk, ending in the phrase:

which gives you an idea of the later gay humor that is thrown in every so often just to spice up the racial slurs.

Totally against peace are  (surprise surprise) the ammunitions makers headed by Winklereid (Louis Calhern) who is determined to rob the money the Indians have given Willy and Hercules and steal the secrets they carry in their diplomatic briefcase on their ship voyage over. To help in this impossible task Winklereid calls forth his “dirty assistant,” “Chow-Chow, the China Man” (Hugh Herbert), who actually is tired of playing the villain and tries to get out of the job.

Winklereid also purchases the services of a brand new “vamp” Dolores (Marjorie White) whose job it is to pick the briefcase lock while Chow-Chow and Winklereid move in on the money belt Hercules keeps on her person at all times.. Dolores is quite sure of herself: “I got what it takes to take what they got.”

But she has little left to do since the first moment the secret agents stride down the ship’s dining room grand staircase, announced as the Secret Agents for Peace, Willy’s papers come sailing out of his briefcase by the dozens. To waste her time, Dolores inexplicably falls in love with the singing Willy and wrestles him to the ground to prove her devotion, repeating the act over and over throughout the voyage. 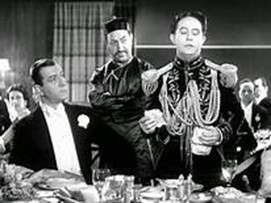 And don’t worry about Hercules; the ship’s Captain being a drunkard serves up enough champagne to drown Queen Mary. In preparation for the bacchanal, the Captain (Richard Carle) shouts out: “Send me a steward.”

Already a little stewed, Hercules follows suite: “Send me one, too.”

“Won’t one steward serve for both of us?

The Captain, rolls his eyes and hisses: “O cannibal!”

They all get drunk, the Captain so sotted that according to the international newspapers the ship takes 8 months to cross the Atlantic, circling, circling, circling. In the end, one has to wonder whether there were enough stewards to go around!

When they finally arrive in France, Winklereid, having failed in his mission so far, is met with four European fellow arms manufacturers, Schmerzenschmerzen, Schmerzenpuppen, Puppenschmerzen, and Puppenpuppen, who demand he hire the “toughest person in the world” who works out of “the world’s toughest dive,” The Dead Rat—surely the precursor of “the seediest dive on the wharf,” “populated with every reject and cutthroat from Bombay to Calcutta,” where Ted Striker and Elaine Dickinson meet in the Zucker brothers and Jim Abrahams’ Airplane! (1980), a film very much in this and the Marx Brothers' Duck Soup’s tradition.

It turns out the toughest person in the world is a woman, Fifi (Phyllis Barry), two young female beauties in negligees, obviously calling up a cheap lesbian fantasy reminiscent of the masses of waving harem girls from scenes of DeMille and others of the day. Fifi fights dirty, however, kissing her male opponents to death as they burn and sizzle from her steamy, deep tongue-in-the-mouth endearments. Winklereid, Schmerzenschmerzen Schmerzenpuppen, Puppenschmerzen, and Puppenpuppen attempt to recruit her for their cause, but she eventually falls for Hercules when he shows up in the dive later on. 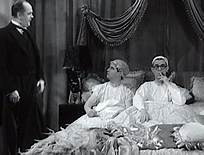 Meanwhile, our two boy barbers wake up in bed together in a Paris hotel—Willy attired without explanation in a frilly women’s dressing gown—carefully looked after by their male valet Marie (Charlie Hall) who, upon their awakening, immediately calls up a chorus line of girls to curl their hair and manicure their nails.

Chow Chow has become so bored that he declares, “I wish I were back in China with my wife who I hate.” Eventually he slips away rowing a slow boat back to China where he is met by his wife announcing, “Your dinner’s cold. You’re five years late.” Pointing at the three children accompanying her, he asks, “Say, where did you get all these kids?” “That’s a surprise.” “Now that I’m home, you can stop surprising me.” 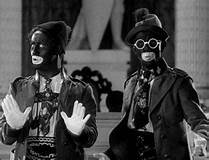 Finally Willy and Herc wind up dressed in yodeling costumes in Geneva, “where the nations of the world fight for peace.” Indeed, a war is going on within the Conference Hall, as all the international representatives are represented fighting with one another. The diplomaniacs arrive, hoping to save the day by trying convince their fellow delegates of peace through a vaudeville number which includes gymnastics, acrobatic tricks, and, after a bomb is tossed into the chamber turning every white face into black, one of the largest minstrel numbers ever put to film.

In the process they talk the former Peace Conference warriors into signing their document, winning the battle while—since Winklereid has slipped in Willy’s original handwritten proposal filled with double negatives (“We promise not to make no more war on nobody at no time.”)—assuring the outbreak a new World War. The boys fly home only to discover they have been drafted.

Sorry, did I say this was an LGBTQ movie? Surprise!

Posted by greenintegerblog at 3:38 AM