The Mack Sennett-produced silent film The Danger Girl of 1916 is of interest to the LGBTQ community primarily because it contains incidents of cross-dressing. But in this case, the film directed by Clarence Badger is a little bit more interesting because Gloria (Gloria Swanson) dons male attire not simply to confuse others or to escape her female identity but to order to change the lives of both her and her friend's boyfriends by forcing them to recognize that the dangerous woman to whom they seem to be attracted is a heartless vamp who will give them up the moment a more attractive man enters her orbit.

Her decision also requires that “the danger girl” (Helen Bray) fall in love with her while she is in male attire, resulting, at one point, in a kiss, bringing the incident far closer to lesbian desire than in most of the comedic films before it.

The problem with this film’s rather interesting and complex plot is that moving at the speed of a Sennett comedy, particularly given the fuzzy quality of the images we have today, it’s somethings nearly impossible to differentiate the characters, particularly since the relationships seem so frivolously determined that they might as well be out of Mozart’s Cosi fan tutti, also a work in which characters dress up as someone other than themselves and ends, accordingly, without our truly knowing to which of the men the two women have ended up being wed.

As the regular contributor to The Century Project, a site devoted to silent films, who goes by the computer handle of popegrutch summarizes:

“This movie is a bit hard to keep up with, in part because the prints I was able to find were of poor quality, so it’s hard to tell actors apart, but in part because the characters don’t have enough personality or back story to identify with. The danger girl is distinctive, and once Gloria’s in her masculine attire, she’s easy to track, but the others seem quite interchangeable. I’m still not 100% sure I kept the division between Myrtle and Gloria straight before the “drag” sequence, and I gave up even trying to tell Reggie from Last Year’s Suitor, although Bobby Vernon is generally recognizable.”

At the beginning of Badger’s film Myrtle (Myrtle Lind) is Bobby’s (Bobby Vernon) sweetheart, but before we can even get to know them they have a fight, and she tosses him out of her suite. 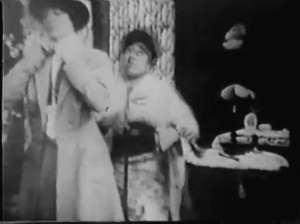 Naturally, at that very moment the worldly Helen (Bray) shows up in riding attire, about to take a horse ride into the countryside. Bobby grabs the nearest horse, evidently not a very trusty nag, and joins her, she happy to have the handsome young man at her side having just given up the character titled Last Season’s Suitor (A. Edward Sutherland), who throughout this film attempts to woo her back.

Off they go, with the skilled horsewoman Helen, naturally, taking the lead as Bobby’s horse not only lags behind but soon loses its shoe and can go no further.

By chance, on the same road Reggie, better known as Honey Boy for reasons unexplained, is taking his sister Gloria (Swanson), who is at wheel of his sporty motor car, on a visit to her old school-chum Myrtle. He’s written ahead to Helen to tell her the news since he, like everyone else, can’t wait to meet up with her. 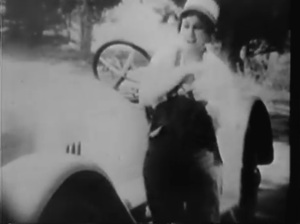 Like Reggie’s horse the car goes off track, sending Reggie and his suitcase, soon after resulting in a flat tire. Evidently cars have the very same problem in this world as do horses.

Suddenly Helen rides into view, and Reggie hopes that he might reunite and even catch a ride with her back to the hotel where everyone is staying, but having quickly changed her interest to Bobby, she gives him a chilly greeting and rides off without him, forcing him to walk to the hotel.

Bobby, horse by the rope, discovers the car in middle of the road a short ways ahead. By this time Gloria and thrown a pair of overalls over clothes and is proceeding to change the tire. Bobby ties up the reins to the front of the car and attempts to help the “damsel in distress,” but finds she has everything in hand, almost driving away with the horse leading. She backs up, discovering her brother trying to create a spark of  friendliness from the cold Helen. He throws his suitcase into the car and off Gloria drives.

Clearly she as taken an immediate liking to Bobby, despite the fact he still has eyes for the Thea Bara vamp. Like Reggie, he is forced to walk back to the Beverly Hotel, but he has won the heart evidently of “the danger woman.”

In any event, they make it back, Gloria and Myrtle meeting up and Reggie finally being introduced to her best friend. Myrtle, having noticed Bobby going off with Helen is still in a fragile state of mind, but meeting up with the Honey Boy at least distracts her from her sorrow. 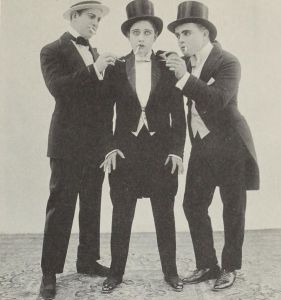 Having also heard of the siren she is immediately determined to do something about her. At a societal event being thrown at the hotel, she dresses in a tuxedo like most of the other men, and gains the vamp’s attention just long enough to keep Bobby and Last Year’s Suitor away from the bench in which she quite successfully courts Helen as a man.

When Bobby complains and is about to shove her off—the method apparently appropriate in this film for the male species to get rid of competing suitors—she draws him as an old comrade into the nearby bar, where she has to undergo some of the spirited and drunken camaraderie of other male-on-male behavior, a difficult task for the more “refined” sex, just as Viktoria learned in Reinhold Schümzel’s Viktor und Viktoria (1933).

Still on the chase for the wrong women, however, Reggie and Bobby must face off in the local Café. But Last Year’s Suitor is still ready to fight off any male who gets close to Helen, and Bobbie and Gloria in drag are his least favorite people at the moment. At the café he attempts to duke it out with Gloria until, with Bobby’s help, she locks him for a while in a telephone booth. But it takes Reggie aboard a bus which he crashes through the restaurant window in order to square things up, Bobby attempting to do battle with the manly Gloria until her hair comes pouring out from under her cap and realizes finally that he is in love with the female for under disguise. Reggie equally discovers he really loves Myrtle. At least I think that’s the way it ends. But Gloria suddenly appears to have Myrtle’s long hair, so I can’t be certain. And perhaps Reggie is still on the loose, since we never actually see him hook up with Myrtle. The only thing of which I’m certain is that “the danger woman” has flown the coup, running anywhere she might never again encounter her Last Year’s Suitor, who appears to be still on the chase.

Posted by greenintegerblog at 3:41 PM