Clyde Cook (with supervision by F. Richard Jones) | What's the World Coming To?

the sky’s the limit—for women

One might describe Clyde Cook’s 1926 short What’s the World Coming To? as an extension of Alice Guy Blanché’s The Consequences of Feminism, except that Cook’s version is primarily  played just for comic laughs without any of the pedagogical significance of the version of 20 years previous; and finally the Hal Roach 23-minute production loses its way with the introduction of other slapstick routines than diminish the overriding narrative’s effects. 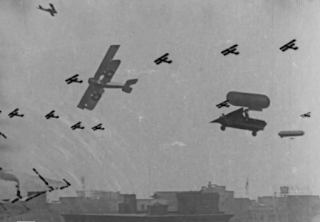 Nonetheless, there are some quite wonderful moments in the futuristic world in which men have now become effeminate house pets for the working women who jet the skies around them to the office, have extensive love affairs, and vie for the homebound husband’s attention as if he were a prize to play with when one’s attention isn’t focused on more serious things. The trio of comic writers who lent their talents to this work should alone indicate the seriousness with which this film takes itself, with Stan Laurel, Frank Terry, and Hal Yates working as the central writers, and Malcolm Stuart Boylan creating the intertitles. 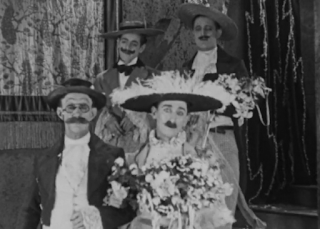 The film—which takes place “100 years from now,” dating it five years from my review—begins with a ritual apparently seldom practiced anymore, the marriage of noted pilot Billie (Katherine Grant) to his “blushing” and “nervous” bridegroom Claudia (Clyde Cook) accompanied by the saddened father-in-law (James Finlayson) who accompanies his dear son down the aisle. Already at the altar is Billie and her dyke-ish looking “best woman” who holds the ring along with a pair of dice in her pocket. 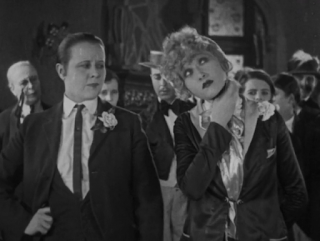 Meanwhile the stunningly handsome Lieutenant Penelope (Laura De Cardi) enters the church in the background, assessing the ceremony as she “casts a sinister shadow over the happy event.”

Due to his father’s cyclonic sneeze, the blushing bridegroom begins to have a series of wardrobe malfunctions starting with his wig, followed by the bride’s accidental dropping the ring down the groom’s sleeve, and ending with his curled-up collar of his bridal blouse before the ring is retrieved and placed upon the his finger.

The vamp Penelope, slithering up to the groom’s side whispers into his ear: “You can’t escape me by an old fashioned wedding—I’ll get you yet my proud Bozo.”  The seemingly doomed couple slips to the church floor on their way out, a gossipy daily declaring in a headline, just a few weeks later, “Old Fashioned Divorce Looms for Couple in Fall Wedding.” 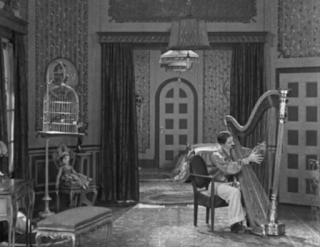 The bride’s father flies in via the aerial jitney to advise his son, paper in hand. He discovers his son playing the harp, bored to death in the new apartment into which his errant wife has placed him like the caged bird who spits in his face when he seeks sympathy.

His father brings the newspaper gossip that Billie is practically making her home on the night blimp in which his sheik stenographer also regularly commutes. He suggests the boy come home immediately since they’ll be able to live off the alimony. 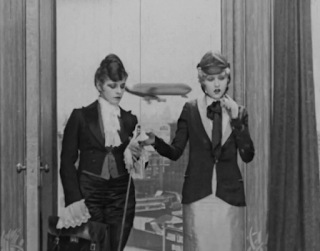 At that very moment, Billie makes one of her rare returns home, handing the butler (Martha Sleeper) her gloves. Her first statement is an apology that she has to catch the night blimp, having  arranged a necessary conference with an important client. Her husband complains that she has been out every night since their honeymoon, surely a sign that something is wrong as he shows her the scandal sheets.

If she is angered by the newspaper she is even more troubled by the meddling father-in-law she discovers behind the curtains and draws a gun to rid the place of him.

At that very moment, a mouse finds it way up Claudia’s leg forcing him to undergo a spastic series of movements like a dance as the father grabs the gun and shoots it into his son’s pants to rid him of the mouse; but the pest only escapes into his own headpiece, ending in the boy knocking his father out with a book stand. It may have seemed to its creators as a perfect comic moment suggesting the need to rid the apartment of another pest as well, but its humor falls flat given the overriding narrative dilemma with which we’ve just been presented.

And morning arrives with no sign of his galivanting wife. Instead Penelope shows up delivering the forlorn husband a dozen roses, which he receives with a great deal of affection and satisfaction that someone, at least, still pays him attention. Primly powdering his nose and applying various perfumed scents to his body, the man of house attends to his visitor.

Inevitably, it is at the instant that Billie returns, furious to discover her lover in the arms of another woman. She takes up a lance, chasing her enemy around the house, almost spearing her husband in the process, but eventually evicting her romantic usurper. 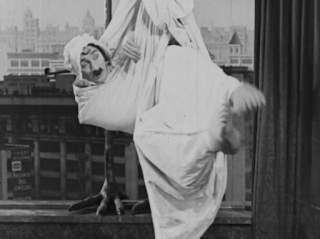 A stork flies in carrying a baby who, coincidentally looks just like the father (since he is also played by Cook). And everything ends well as the father-in-law hanging throughout most of this scene by his fingers from the window-ledge falls, apparently, to his death.

It’s interesting that in this comic-book look into the future of the sexes, the reversal seems to be permanent with no change in sight: males have lost their status to the dominant females without anything having been learned about the problems that sexual dominance creates. Men have simply been emasculated forever, serving as substitute slaves the way women had for centuries. Clearly the world is coming to a stasis that allows little alteration in the ideas behind heterosexual normative behavior. It might have been interesting to see the stenographer who so attracted Billie. Is there another kind of man available in this Jetson-like cartoon society for the obviously superior women who control it? Or, one cannot help but wonder, is the mysterious stenographer also a woman?

Posted by greenintegerblog at 10:55 AM