Denis Theriault | I Am Syd Stone

I Am Syd Stone, the 2014 short by Canadian director Denis Theriault is mostly a one-liner in story about a celebrity meeting up with his past somewhat in the manner of the second of Neil Simon’s short trio in from his Plaza Suite play of 1968, brought to the screen by Arthur Hiller in 1971.

Like that work, Theriault’s 10-minute film involves  a noted figure in Hollywood, in this case the actor Syd Stone (Gharrett Patrick Paon)—instead of Hollywood producer as in Simon’s short— who meets up with an old flame when he returns to his Canadian town for his 10-year class reunion.

We can only suspect that he has made the return primarily to hook up again with his secret high school gay lover, Paul (Sean Skerry), particularly since he apparently has been drinking vodka and tonics since his arrival in his hotel suite, and hardly knows how to respond when he hears that Paul now has a daughter. As he puts it soon after, “You’re different. I adapted. Seems like you did too.” 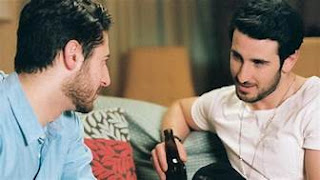 What he has adapted to, it is clear, is a closeted sexual life living with a girlfriend with whom, every time he has sex, he still thinks of Paul. He had hoped, like the character in Simon’s play, to light up the spark of love remaining in his high school friend possibly leading to a bedroom fling that might have to satisfy him for the rest of the life. So, in this case, the work is not a comedy, but a kind of sad melodrama played out by Syd’s attempt to kiss Paul who fervently rejects his advances given the fact, we presume, that he is a married man now in a heterosexual relationship: “You shouldn’t have done that.” 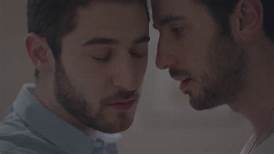 We feel Syd’s deep pain in realizing that as successful as he has been in his career—a crowd of fans and news reporters have gathered below just to get a glimpse of him and even Paul’s daughter regularly watches his film performance in her favorite dinosaur movie—he is a lonely man, unable to find, given the fact he feels it necessary to hide his homosexuality, the sexual intimacy he had with Paul years before.

Paul suggests he sober up and “come” downstairs to the event. “A lot of people are excited to see you again,” he adds and leaves.

The rest of the film is presented to us in slow motion as we gradually see Syd’s world crash down around him as he finally takes the elevator to the ground floor, where we first spot Paul introducing what appears to be a male friend to a woman we presume is his wife. But the closer Syd moves to the reception table we recognize that actually it is the woman, a high school classmate heading the check-in table, who he is introducing to the man. And as the camera pulls back to show us Syd’s point of view, we suddenly recognize that the man is Paul’s husband (Michael Gaty) at the very moment that Syd perceives the same thing.

Syd turns around and leaves the event.

In 2019 Theriault expanded this short into a six-part web series in which, evidently, Syd Stone’s career has now faded and is back in town on location for a grade B-movie, when he meets and falls in love with local lawyer Matt (Benjamin Charles Watson). I have yet to see this film, but of course will attempt to see it and write about it when I can.

The 2014 short won several awards and was nominated for best short gay film of the year at numerous festivals when it first appeared.

Posted by greenintegerblog at 2:06 PM