Italian director Fabio Mollo’s short 10 minute film Al buio (In the Dark) is about two roommates, Antonio Josefia Forlì) and Marcello (Daniele Grassetti), who have been friends it appears for some time.

Antonio seemingly encourages his friend to engage in his heterosexual relationships and describe them to him; almost like a married partner he tells his friend which shirt looks best on him when he goes out on his dates and he keeps a close tab on which girls Marcello is seeing and which ones seem more than a simple “lay” or who represent someone who’s had sex with everyone in their school.

But on this particular evening, as Marcello is about to go out, tensions begin to rise as he challenges his friend to join him at a party, to get out instead of staying in the room as usual to study, querying when he might begin to explore some of the women he keeps talking about. He is also particularly disturbed by Antonio entering their small bathroom while he is trying wash up and dress for going out. But the boy literally ignores his plea, sitting down on the toilet seat to watch his friend in the mirror. And much of the rest of the scene is played out in mirror images of both, suggesting that there is another side to each of them.

Finally Marcello tells him that he has invited a girlfriend over for the night and suggests his roommate find somewhere else to go for a few hours. The tension mounts as Antonio argues that the girl who he has invited over, Oriana, is like all others, and wonders why he has asked her to the room. Why is she special? Surely he doesn’t really love her. 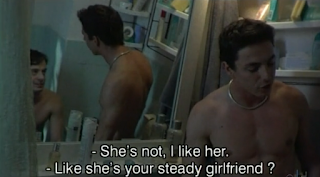 Antonio declares “You don’t really like her,” continuing “She knows nothing about you.” Marcello demands he stop.

But his friend continues, “You don’t give a damn about Oriana.”

“I screw her every night.”

It now quickly opens up into a shouting match as Marcello says the obvious, that Antonio is 20 years of age but hasn’t yet been with a girl. It’s not “normal.” But still the other holds his ground, arguing he doesn’t need to have screwed a girl to know the truth.

Just what that truth is gradually spins out of their argument as Marcello finally speaks out about his friend as being gay, the other responding, “Why? Does that disgust you?”

It is a bit like the game George and Martha play in Who’s Afraid of Virginia Woolf?: once one has brought up a subject it is fair that the other can expand on the it; and with a seemingly righteous sense of vengeance, Antonio now snaps off the bathroom light to insist “let’s tell in each other in the dark.” 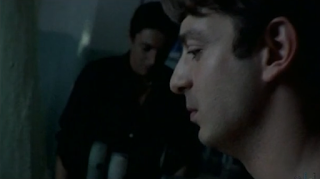 “If I’m gay, what are you?” Evidently for years now every Saturday afternoon, Antonio has knelt down and in the dark given his friend a blow job, apparently without any in-kind response.

Quickly snapping the light back on, Antonio asks him if he wants to stop. “Are you still here?”

Marcello, still not ready to admit their relationship, turns away. “I’ll go out then.”

Again, Antonio asks when he will be back as if he were a demanding house mate.

But when he receives no answer, we see him turn and, almost as if a threat, call out: “What would mom and dad say if I told them? Would they still consider you the model son?”

Suddenly, the world has shifted. As the doorbell buzzes, signifying Oriana’s arrival, Marcello returns to the room, putting his hands upon Antonio’s shoulders. He rubs his hands across the boy’s hair turning him around to face him, gently caressing Antonio’s chest. 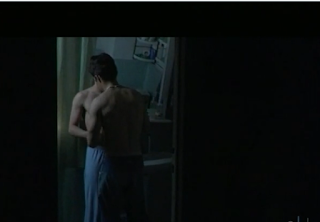 The door continues to buzz, as he takes off his shirt while continuing to rub his hands across Antonio’s chest, switching off the bathroom light once more. Antonio kneels, but this time Marcello, putting his hands on the boy’s chin, raises him into standing position and gradually bends down to himself fellate his brother. The door closes with a soft sigh of relief and joy emanating perhaps from Antonio or just the audience’s gasp in realizing that Marcello has finally been able to admit he is in love with his roommate who may just possibly be his sibling as well.

This may conform to all of the hundreds of other “coming out” films superficially, but we recognize if what we now suspect is true, there can be no traditional “coming out” ending. The silence of the closing bathroom door with lights out says everything. This is a relationship that, alas, must remain behind closed doors.

Posted by greenintegerblog at 7:46 AM