in search of it

Norwegian director Frank Mosvold is one of the several Scandinavian directors who came to age as significant filmmakers in the last three decades of the 20th century, and have continued to produce significant works since.

Mosvold’s early works such as A Kiss in the Snow (1997) and Waves (1998) are laconic dramas of deep friendship that very subtly spill over into a quiet expression of love which is all the more dramatic given their unexpectedness. In the former film that moment comes when one boy in the midst of a snowball fight suddenly kisses his friend. Nothing really changes in their lives; indeed the boy who kissed his friend soon moves away. But a long delayed letter expressing his love still speaks of an earthquake of change which will likely effect these young men for the rest of their lives.

Nothing quite so dramatic occurs in Mosvold’s beautifully understated film of the next year, released in Norwegian as Bølgene. Outwardly in this film things go on in a rather unchanging rhythm not unlike the quiet waves that lap against the shore of the island where two teenagers have made their way for the last ten years of their lives.

But this year is somehow different without having outwardly changed at all. Indeed the 10.34 minute film begins with one of the two (played by Erick Ferguson and Stian Barsnes Simonsen) claiming that “Everything stays the same, nothing changes.” But as the other responds, “Everything changes sooner or later.” And we know by the end of this work that something very important has begun to change.

Indeed, that possibility is expressed in the very first line of the film when one of the boys says, “You think about it too, right?” a vague statement with, between the two of them, a very particular referent in the “it,” to which the other pretends ignorance by answering, “What?”

That referent is, in fact the subject of this film, as the two recall their many times of having made the annual retreat to the island, their childhood experiences there such as climbing trees (“No one has climbed as many trees as we have”), swimming, and just staring into the cabin fire with a cup of hot chocolate listening to the rain outside. As one of them puts it, “We always have a nice time out here.”

They feel absolutely comfortable with one another and can speak with each other about anything. One of the boy suddenly asks, for example, “What was it like,” the other stating “At first I did it for her, to avoid not hurting her feelings.” What he is describing, obviously, is his sexual encounter with a woman. “Was it nice?” “Mostly it felt strange. Especially the warmth. I didn’t expect it to be that warm.”

The other, obviously still a heterosexual virgin, wonders if he will ever do it, the experienced boy dismissing his statement to suggest that clearly he will once he finds the right woman. “You’re just picky,” he insists.

But the boy proclaims: “I want someone I can talk to about anything. Like you.”

Yet the boy remains adamant in his desires. “I only want to make love to someone I can talk about anything.”

Apparently, what he is saying just below the surface is that he wants only to make love to his friend. Yet neither can admit that or openly express their feelings toward one another.

Earlier, when one of them suggested “Don’t you think it would be different if we lived here,” the other quickly shut down that avenue of conversation: “Don’t say that.” Asked a few moments later, “What’s on his mind,” the first answers, “You told me not to think like that.”

We sense, accordingly, that we are getting closer to the “it” of their first sentence, the something that not only cannot be said, but cannot be thought of.

But this time these two teenagers realize that they have suddenly grown into young  adults, and they worry—the shy one perhaps more than the other—about what will happen in the future, how, despite his insistence that “everything is the same,” it may be different, everything having changed despite their desires that their world remain in suspension.

In the middle of the night, one boy asking if the other is still awake, asks “Do you realize it’s been ten years.”

“What’s been ten years?” speaks the recalcitrant other.

“Ten years since the first time we came here.” After a long pause, he continues, “I am glad you’re still here.”

“I’m very fond of you,” the more reticent one finally admits.

“You’ve never said that before,” responds the other.

I don’t want to make light of this touching scene, but it is almost as if we have suddenly been projected into the scene in the musical Fiddler on the Roof with Tevye and Golde singing in “Do You Love Me?” that “I guess I do.”

And the next morning, as they sit ready to row back to the mainland, the slightly more mature boy takes their relationship a step further, asking if the other is cold, and when the other responds “A little,” putting his arm around his shoulder. 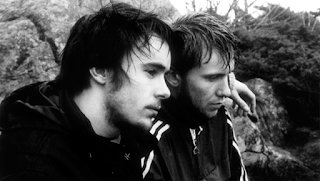 The other again waxes a bit poetic: “Everything seems so distant. So far away.”

“I’m not that strange,” suggesting a distance that still lies between them, the one far queerer than the other which forces them to keep their feelings of love for one another at a safe but almost intolerable distance.

But then he adds: “But I understand what you mean. It’s as if nothing matters.”

As they put the boat out into the water they repeat the opening phrases precisely, but this time the “it” is apparent and has been even admitted to, whether or not they can ever consummate their “marriage” with sex.

Director Mosvold apparently proclaimed that this short film was grounded in the rules of Dogme95, which read:

Shooting must be done on location. Props and sets must not be brought in (if a particular prop is necessary for the story, a location must be chosen where this prop is to be found).

The sound must never be produced apart from the images or vice versa (Music must not be used unless it occurs where the scene is being shot).

The camera must be hand-held. Any movement or immobility attainable in the hand is permitted.

The film must be in color. Special lighting is not acceptable (If there is too little light for exposure the scene must be cut or a single lamp be attached to the camera).

Optical work and filters are forbidden.

The film must not contain superficial action (Murders, weapons, etc. must not occur).

Temporal and geographical alienation are forbidden (That is to say that the film takes place here and now).

Genre movies are not acceptable.

The film format must be Academy 35 mm.

The director must not be credited.

I have never been fond of putting strictures on what a filmmaker might or might do. And obviously, some of these “rules” have been intentionally bent if not broken in the example of Waves. Mosvold has accepted the credit for his film. The boy’s voices are often heard when the screen is black or a character is momentarily off camera. And I would argue that any movie discussing intense same-sex relationships, which this one does without specifically admitting it, is of the LGBTQ genre, since it still is perceived as something apart and different from the heterosexual normative films which dominate filmmaking. Moreover, this seems to be part of sub-genre of the broader gay category: if these boys haven’t just come out to one another, then I’ve missed the message of this lovely short.

Posted by greenintegerblog at 5:06 AM