One of the most important films released at the very height of the AIDS crisis in the 1980s was Jerry Tartaglia’s experimental film, Ecco Homo. Not only did Tartaglia, as Vito Russo argued, “reclaim desire in the age of A.I.D.s,” but through his film set out not only to untangle the impossible web in which homosexual cinema and gay porno found itself entwined, but to dissociate those who claimed the power through guns and governmental authority to determine what sexual images and behavior were permissible and those who actually held that power through their communal desire depicted in the images they are watching for very different reasons. 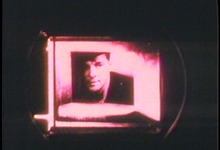 Tartaglia does not claim that this desire is “safe” nor even suggest that it should be; indeed because it is perceived of as impermissible by those who desire neither the gay bodies nor the sex it details, all gay sex, real or observed is unsafe; but once more in that very fact its enactment is a representation of power that Tartaglia demands that the gay world reclaim. 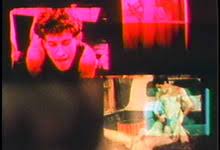 And Tartaglia’s wonderful verbal narrative with its endlessly shifting sense of logic as it unweaves the idea of power and its actuality takes the mind on a flight of alternating logic and illogicalness of any “others” making a decision about what an already “marginalized” and “disappeared” society might or might not see.

The text is so brilliantly loopy in its logic that it has often been reprinted, which I feel the need to do again here, just so if you haven’t previously, you might experience it’s philosophical equivalents of “pulling out the rug from ‘those in authority’s’ feet.:

I am watching a segment of Genet’s film, in which the guard is watching

the men, and when he removes the gun from inside his jacket, he puts the

the gun having sex and watching the film with homo sex, I see the men 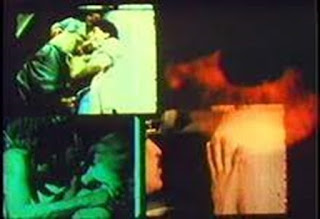 was burning in the film, and the homo sex of the cop who was watching

the police, who have the power, and the doctors, who are the men with the

were having sex with the men, and when personal desire is power when

is the cop watching with the gun which is in the film which is Genet,

who was Stonewall, which was not safe when desire is power, and the 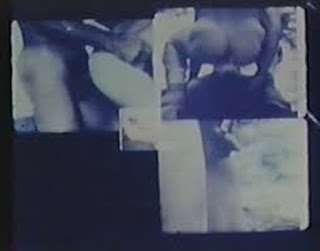 After a pause to savor the multiplying images the director is presenting, the verbal narrative returns as a two-short line summation which might almost be described as the Mixolydian and Hypomixolydian modes of the final phrases of the Gregorian chant:

Personal desire is power. Reclaim our desire, reclaim our power.

Collective desire is power. Reclaim our desire, reclaim our power.

Coming after more than a year and a half of the sad news of death after death of members of the LGBTQ community—Tartaglia himself working intensely on three important A.I.D.S cinematic screeds gathered as The A.I.D.S. Trilogy (1988-1990), A.I.D.S.C.R.E.A.M (1988), Ecce Homo (1989), and Final Solutions (1990)--this work speaks as almost a joyous invocation of gay body and sexual desire at the heart of LGBTQ filmmaking. Tartaglia, as he himself proclaims, was less interested in pushing a queer normative story which by this was becoming more and more popular to diffuse the fears of the heterosexual community over their associations with the LGBTQ community and disease. Rather, his was an aesthetic that accentuated the differences. As he wrote:

“I am not very interested in creating narrative forms, which generally are used to show how gay people are supposed to become lavender carbon copies of straight people. Instead, I work with short, personal, experimental forms which explore and celebrate another kind of conscious human identity.”

In the decades long debate in the gay community between Genet and François Reichenbach, Tartaglia had emphatically chosen the former.

Posted by greenintegerblog at 8:55 AM