Ly Tran’s gentle LGBTQ-friendly movie expresses a lovely tale about a young man having difficulty coping with life, but not because of his sexuality.

Indeed Rose Canyon seems to exist in an alternate universe that I never have experienced, but would wonderful if it were true. In this world young men such as Oliver (Robert Charles) may be suffering over the sudden absence of a father, who evidently left this boy’s mother and him one day for another woman, simply packing his bags and leaving the house; but there are almost immediate healing forces of love that quickly arrive to help bring him back into everyday living.

For the several days after his father has disappeared, Oliver’s mother has been laying in a near-catatonic state on the living-room couch. Her son, caring for her as best he can, has skipped school and retreated to his room for long periods of sleep and empty stares without expression into space. As the director represents it everything that might have drawn the mother and son up and out into the enjoyment of their home has disappeared. The closet is emptied of all but one garment. The dining room table and chairs sit eerily immobile like funereal forms in a darkly lit room; the patio furniture receives the rain and the glares of the sun as if it were ready to suddenly be taken over by rust. Suburbia never looked so gloomy.

Evidently, the mother has communicated with a neighbor friend about what has happened since that woman’s son, Kai (Robert Mackey), appears suddenly at the door, ringing the bell and restoring a moment of hope for Oliver imagining that it is his father returned. When he encounters only a classmate come to share that day’s homework assignment you can see the instant when joy suddenly drains from his face.

“My mom says you might be out for a few days, and I thought I’d drop by give you the homework....” Kai asks if Oliver coming to school the next day, but the boy doubts it. A little oddly, Kai asks “When do you think you will?”

Oliver’s response is vague to say the least: “I don’t know.” 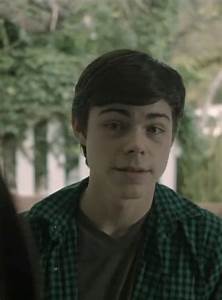 But Kai does not quite let up his pressure, suggesting he can come back and give him the assignments for as long as his classmate is out of school.

The suffering boy tries to brush him off, turning and ready to close the door.

But it is at this moment when “the helpful neighbor” story gets interesting, and slips its gears from being a more traditional “coming out” story.

As the door almost closes Kai loudly clears his throat, Oliver reopening the door to hear what else he might have to say. “Sorry. I was wondering....I actually came here to tell you something. We’ve had a few classes together, and...a...I like you. As in...I have feelings for you. And I was wondering if some time you wanted to go out.”

The somewhat pushy Kai continues, “Would there be a better time?” a question that appears not to be asking precisely when they might get together but “if” there is a possibility of their “hooking up.”

Kai immediately jumps in with specifics. “How about next week?”

“Well, uhh, I just have a lot of things on my mind right now.”

But Oliver, recognizing what is in jeopardy, gives some way. “No...I...(bashfully smiling)...I’d like to. I just want to be alone right now though.” A long pause. “I’ll see you later, and thanks for the homework.” He closes the door.

I’ve quoted this basically uneventful passage in full because it easily reveals something I have come to gradually realize about my reading of LGBTQ films. I now perceive that what most attracts me to these works, and what makes me interested in queer cinema in general is not just the fact that these works document queer activity or show personal interrelations between same-sex figures that are not readily available in the vast body of heterosexual normative worldwide film-making, but that in almost all of these works there is something also unusual or queer about the narrative, the writing, the characters, or the images they present.

What interests me most about these works is not when they follow the general patterns of whatever genre of narrative into which they fit, but when suddenly something slips in the gears of that well-made work, when a scene that might have been naturalistically rendered suddenly moves into a highly theatrical mode or when, as in this case, the usual clumsy attempt to check out whether the boy you love might, in fact, be gay enough to like you as well. Unlike almost film I’ve encounter in the now nearly 700 works I’ve viewed, no previous film so easily presumed that possibility as does the 15.48-minute short, Rose Canyon. This must be one of the first times that queerness is expressed as simply the normal: “I have feelings for you.” Kai has utterly no difficultly and just a little reluctance in expressing what any straight kid might blather out to the neighborhood girl in a moment. And Oliver receives the news that he appeals to the other boy with an equanimity that is breathtaking. He’s ready and willing, just not at the calamitous moment in his life.

Queer movies are not just queer in their subject matter, but even in their way of expressing what they have to say. They seldom behave as one expects—which of course might be argued about any truly interesting work of art—but are irresistibly attracted to the process of letting the gears of the plot or character slip to reveal that something else is going on, that somehow what is happening don’t quite work out the way one expects.

This is particularly true of the Hollywood films that I have read as coded works; the reason they’re so obvious to a lesbian, gay, bisexual, or even sexually unsure person is that somewhere along the line of their smoothly running parts, a figure, a detail of story, a camera shot goes awry, does something no one might have imagined it doing. And if you look carefully at that moment you discover that the work probably is saying something else than it wants to, revealing another possibility of viewing what is happening on the surface. It’s much like “dropping a bead,” (see my essay “Dropping Beads”), letting out a little bit of information that only someone sensitive to of “clued into” it might recognize as expressing a greater truth than what it appears to say.

In Rose Canyon the fact that absolutely nothing is hidden about Kai’s desires is what makes one take note. The boy wants to help his friend out of his funk and into his bed without even quite knowing why the other is suffering; and it appears he won’t let up until he succeeds in finding out the reasons for his pain or helps to effect that change. 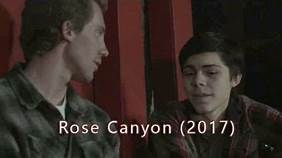 Kai shows up the next day with homework assignments in hand as well. This time it is clear that Oliver read his friend’s message quite easily the previous day. “I told you, I’m not really in mood for dating right now,” Kai responding, strangely cautiously, “We don’t have to be...dating. We could just hang out.”

A slow grin comes over Oliver’s mouth: “If I go on a date with you, will you stop coming over?” This might represent the strangest acceptance of another’s sexual advances ever witnessed.

How might Kai think about not taking up his offer. They go on a long walk where Oliver suddenly finds himself in Rose Canyon which as a child he evidently often visited with his beloved father. It is, so he discovers, one of Kai’s favorite places in which to contemplate and simply watch the sun go down, which they do together.

The next stop is a large public artwork, presumably one of artist Robert Therrein’s outsized pieces of furniture (or someone imitating him), in this case a large red chair upon which the two sit, as Kai further questions his friend about his problems, discovering that Oliver’s father has just abandoned him and his mother.

Before the night is over they wind up in Oliver’s bed, Kai waking up the next morning in a hurry to make it to school for a math exam. He tries to encourage Oliver to join him, but his new lover still refuses, preferring to suffer it out apparently for a while longer at home.

Kai leaves and in the midst of his exam Oliver unexpectedly enters the classroom, as a large a smile crosses Kai’s face, realizing that he has helped his friend and won his love—amazingly without even the least bit of subterfuge.

Posted by greenintegerblog at 7:18 AM