much ado about something

Well known for his short gay erotica films of the 1960s, over the next decade Pat Rocco also became involved with various gay liberation groups and from the beginning shot numerous related activities—protests, parades, interviews, meetings, lectures, and various other events related to the gay community. When he left his archive to the University of California Los Angeles (UCLA), many of his tapes were restored and re-issued through the UCLA Film and TV Archive.

One of the earliest of these, from 1970, was a rather small protest beginning with about 40-50 individuals that grew in size perhaps to 100 or 150 against the sign in the West Hollywood legendary eatery, Barney’s Beanery: “Fagots Keep Out.”

Through his conversation with the original owner’s daughter, Joan Elowitz, we learn that originally there were 8-10 such signs throughout the establishment put up in 1959 to “discourage the faggots from coming in” after a raid by the Los Angeles Police Vice Squad:

The vice squad had a raid in here. It took us two years to clear

wasn’t cleared, then the liquor license would have been suspended.

But the name was cleared up and everything was straightened out

and as a result, Dad put the signs up. There was a total, I think,

of eight or ten signs throughout the place, but they just stayed in

“And now you’re down to one sign,” adds Rocco, to which Irwin Held, the new owner waiting for escrow to clear, adds: “We should have a sign at the back door.”

When Rocco asks how she feels about the protests going on at the moment, Elowitz answers:

But I’m not going to pull it down for that reason.

Rocco: “What reason would you find that would be important enough

The owners seem shockingly dense about the whole thing, seemingly unable to comprehend why it offends gays and, perhaps even more importantly, why anyone might find it problematic, as if it were some historical monument that should be kept simply out of sentiment’s sake.

No one, including Rocco, considers to ask why would the 1959 Vice Squad have raided a restaurant for simply serving gay men or lesbians, or what those “faggot” diners might possibly have done to deserve such attention. Of course, it might have even been the law that homosexuals could not gather at such a public location. But how, one might wonder, were these men or women identified as being homosexual in the first place? Were they laughing too loudly, camping it up, kissing one another? It doesn’t seem to matter much to the owners current and future. They were faggots and that seems to say everything.

The current manager of the restaurant and bar, Ruth Pappas, responds, when Rocco asks her if something should be done in response to the protests about taking the sign down:

No, I don’t think we should do anything about it. After all,

it’s on our own premises...It’s part of the place.

After his original outburst, Held pretends objectivity, noting that, at least in his mind, times have changed meaning that the relevance of the sign is meaningless:

Anybody who comes in here is welcome to be served.

..And as long as they behave themselves and not interfere

with anybody else that’s their privilege and the sign

will continue and anybody that may not like it or enjoy it,

or be at ease as a result of it, it’s a two-way swinging door.

But obviously there are precisely  “hard feelings” which is why the protestors are now chanting just outside their door. These people see unable to connect.

Rocco chooses to actually show us the sign, an important thing to do, particularly today when in the midst of one of the US’s most gay-friendly cities it might now be unimaginable that such a brutal sign might really have existed. But there it is: FAGOTS STAY OUT!. 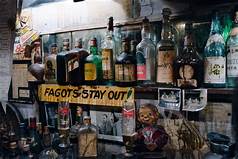 At the bar facing it is a man and his wife who insist that Rocco talk to them as well. When asked how he feels about the protests, the man replies: “They’re on the street. I’m in here. That’s my wife.”

In response, Rocco makes the same comparisons as some of the protestors do soon after:

Or Mexicans stay out? Or people with children stay out?

(He misses another obvious such sign, which appeared—and perhaps still existed at the time of this film—in restaurants, hotels, and other establishments throughout the USA: “Jews not allowed.”) The man answers with what almost might almost seem like an irrelevant statement if you didn’t perceive that it was expressing his sense of heterosexual prerogative: “I just like my wife.”

The wife, in turn, begins a sentence that moves a bit further in revealing their homophobia: “It’s always been Barney’s Beanery’s...law. "

As Troy Perry, Pastor of the Metropolitan Community Church in Los Angeles, a church that invited homosexuals to worship, points out when Rocco moves outdoors soon after, the gentleman who put this sign up—Perry holding up a copy of Life magazine from June 26, 1964* showing the original Barney (John “Barney” Anthony)—says “he thinks homosexuals should be shot.” Here finally we have the direct evidence of the violent bigotry that lay behind that “antique sign,” the “law” of Barney’s Beanery the woman at the bar began to talk about.

Accordingly, when Rocco chats with Morris Kight, the founder of the Gay Liberation Front in Los Angeles, whose group are the ones shouting slogans such as “Hey, hey, hey, hey, we are proud and we are gay” and “ Two, four, six, eight, gay is just as good as straight,” I found his answers to what he was doing there surprisingly empty and even somewhat odd:

I thought it was time for a protest. And my position here tonight

is to complain about this particular injustice.

time. And they have a sign that says “Fagot stay out.” Now,

it doesn’t offend me awfully, but it offends everybody else.

which should have gone out of style along with “Niggers stay

out” and “No Mexicans or dogs allowed.” And these kinds of

things have to go.

I can’t explain to myself why Kight  doesn’t see this as a signifier of homophobic hate, or why he might, as he put it, find the sight of it “a little funny.” Why use the pronoun “they” as opposed to “us” or “I?” Apparently he doesn’t even know that the sign does not refer to the “idea” of “faggotry” (a faggot) but to all the real individuals who are homosexuals. These are minor issues, but they reveal a way of thinking that is a bit troubling in that it diminishes what the group in general is actually attempting to do.

Kight wishes that they might simply put an X through the word “out,” welcoming homosexuals and homosexuality without realizing that at heart all this time they have truly been threatening them, even if a queer is now allowed to stay for dinner. Being “in” or “out” is not the issue; it is the misspelled word “fagots,” like the word “nigger” or “jew” or “Mexican dog” that speaks of John “Barney” Anthony, the owner’s hate.

(When I use the word “queer” as I do endlessly in these volumes, it is because I am claiming and redeeming my difference from a person who uses that same word as an expression of degradation and hatred. And that “différence,” as Jacques Derrida might point out, is everything that matters. If I use the word “faggot” it is to start a fire not to accept anyone's notion of my inferiority.) 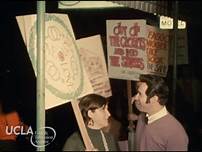 Rocco interviews a female marcher who speaks quite succinctly about why she marching, equating the “Fagots stay out” sign with the “No niggers in the South” when Blacks began their first protest marches for civil rights. The earliest protests, she reminds us, “were about the signs in cafeterias and other public establishments.... And I feel this is a good starting point for us.”** Her comments help to explain why such a seemingly small issue became one of the first battles of post-Stonewall Los Angeles gay liberation community in the 1970s.

Rocco even talks to the single police officer and his partner assigned to watch over the event. Well spoken and thoughtful, the young officer, although by police policy refusing to give his personal opinions does recognize it as an issue of “discrimination toward homosexuals,” having no fear that things might get out of hand: “They’re going to cooperate with us fully. We’re going to cooperate with them.”

Unfortunately, Rocco doesn’t do as well when he perceives that officer's partner is a woman, as he suddenly gushes over Deputy Swing, “This looks like a lady officer. I don’t think we’ve had a lady officer on camera before. She’s a lovely lady.” We have to chalk his unintentional condescension to the fact that Feminists had not yet reached this former purveyor of male erotica.

But you do have to praise Rocco simply for being there, in these early days, and putting it all on film for his Bizarre Productions.

That sign did not come down until 1985 when West Hollywood became an independent city, and the gay-dominated City Council took as its first test of power of their determination to ban discrimination against homosexuals to demand the removal of the Barney’s Beanery sign and the match books which repeated that phrase on their covers. Not wanting a court fight, Barney’s sign was put away, we hope, forever.

*I recall that issue of Life very well from my childhood, and have mentioned it before since it represented a terrifying moment in my then young life. Having read that article about homosexuality in the US, I has startled that the reporters seemed so ignorant and naïve that—at least as I remember it (I have not been able to find what led me to this conclusion)—they were startled to see homosexual men kiss in public. I did not yet perceive myself as being gay, but even I who had grown up in Iowa I imagined that if you loved other men you might perfectly well want to kiss them, even in public. When I asked my father about the article, the normally mild tempered man grew red in the face and shouted back at me: “If ever I found out that one of my sons was homosexual I’d immediately disown him.” I was so taken aback that from that day forward I begin to wonder about what being homosexual meant and whether or not I too didn’t prefer men to women. In short, that article and my father’s response forever changed my life.

**That very same year my new companion, Howard, whom I’d met, as I’ve often noted, at the first gay liberation meeting in Madison, Wisconsin protested with others the Madison opening of the film The Boys in the Band disturbed as we all were by its various stereotypes of gay life. Of course, we all recognized its significance in American filmmaking as being one of the first films to actually focus on a gay group, but its negative connotations simply outnumbered its positive encouragement of gay representation. I had even served as an usher for the play’s New York premiere a year earlier; but a great deal had happened between early 1969 and 1970. It was our foray into battle, which, I’m sorry to say, until now went no further.

Posted by greenintegerblog at 3:57 PM