the problematics of a first date

O those poor Icelandic gay boys. What they have to go through! Everybody just presumes you’re straight if you live a fairly “normal” life, enjoying sports, music, conversations with friends, and, of course, internet communications.

Andri (Ásgeir Sigurðsson) is in a particularly difficult situation, after having found a nice guy on Tinder and engaging in a conversation about the evening ahead when Andri’s best friend Reynir catches up with him walking home from school. Hearing the ring of the cellphone, the friend wonders if Andri has finally hooked up with a “chick,” “someone he can put it in.” Andri muses, “Perhaps.”

They’ve just previously noticed a couple of their school mates beating up “that Sigmur guy,” a fight which fortunately a teacher stops. We don’t know who Sigmur is nor why he is being bullied, but obviously we suspect....”

Meanwhile the conversation with his new Tinder friend continues and Andri and he make a date for sushi that evening, maybe a movie at the nearby Church as well. Even the Reykjavik churches seem youth friendly. At home, his father Hjörleifur (Davíð Guðbrandsson) tosses out a friend greeting, a snack of dried fish, and admits that he’s looking forward to watching TV sports with his boy that night. Andri’s mother is making meatballs.

When the son reports he won’t be home for dinner since he’s having sushi, Hjölli immediately beams with the good news: obviously, his son has a date, apparently his first. Like any prying parent he wants to know the name of the girl. And later, probing further, gets scolded by his wife, Ásta (Bryndís Ásmundsdóttir ) for teasing Andri in his comment that he wants to know the name of his future daughter-in-law, a moment or two before she too turns to the boy, arguing that he can trust her, as she conspiratorially whispers “Hey. So what’s her name?” 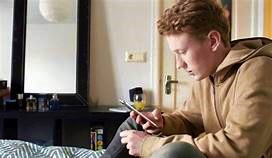 By this time, the poor boy is so tense about the whole situation that he texts his new friend that perhaps they should make it on another night. But finally, in resistance to the pressure he’s received, he texts back “Nevermind. I’ll meet you at 7.”

In fact, except in the presence of his friends, Andri says virtually nothing at home. He speaks through internet messages alone, the camera catching him in long moments of worrisome speechlessness in response to his parent’s jovial chatter.

First dates are always difficult of course, and “coming out” is generally an even more fraught situation. But as Andri dresses, puts on a bit of aftershave, and checks his face out in his mirror, he comes up with a brilliant idea. Scurrying out the house without a word while his mother is on the phone discussing the failure her yoga classes with a friend, he leaves behind a scrap of paper.

When Hjölli sits down with a couple of beers in preparation for the game he notices the note. Reading it, a slow smile comes over his face that grows bigger over several moments until he begins to laugh, grinning like Lewis Carroll’s Cheshire Cat. The note reads:

Hjölli giggles, with joy calling out to Ásta at the very same moment that we see Andri spotting Tómas, both boys quickly smiling as they stand a few feet away from one another in greeting, obviously enjoying what they see of one another.

All’s well that ends well, and apparently in a liberal, tolerant consensus culture such as Iceland most things do end well.

But truly, I’m not making fun of the seemingly minor issues that produced such feelings of consternation in Andri’s perception of events. And clearly, as we’ve just observed, there are bullies waiting around the corners of Reykjavik gymnasiums as well as those hanging out near American schoolyards. But it’s hard to imagine any US newspaper writing something even close to what Finland’s Keskipohjanmaa observed in 2020 about this short, 14-minute film:

Uncertainties are allowed to recede as Andri makes his independent choice to go his own way. The inner strength of a quiet, sensitive young person is seldom seen so finely interpreted.

The parents’ roles are equally successful. Curiosity about a "girlfriend" can hurt, even if it's only benevolent teasing. Andri's father Hjölli (Davíð Guðbrandsson) and mother Ásta (Bryndís Ásmundsdóttir) are ready to turn their assumptions swiftly as if on a dime and accept their son's choices and his uniqueness. The director shows happy and loving family life. Safe home life is reflected in the complete trust and acceptance between the mother and father.

For the LGBTQ individual who seeks utter acceptance Scandinavia is clearly her, his, or hir kind of paradise. Queerness here has obviously lost its meaning.