Willard Maas | Image in the Snow

the dream of unhappiness

Poet and filmmaker Willard Maas was an absolutely fascinating being. Married to fellow experimental filmmaker Marie Menken who, despite his regular extramarital sexual relations with other men, seemingly tolerated his homosexuality; the two held regular salons to which they invited a wide range of intellectuals, visual artists, writers, filmmakers, poets, and others. For many years he was a faculty member at Wagner College in New York, involved with the New York City Writer’s Conference, held at that college.

Despite their sexual tolerance, however, the couple were notorious for their shouting matches, particularly when they both were drunk. Andy Warhol described them: "Willard and Marie were the last of the great bohemians. They wrote and filmed and drank—their friends called them 'scholarly drunks'—and were involved with all the modern poets."

Fellow filmmaker Kenneth Anger has described them as possibly being the models for George and Martha of Albee’s Who’s Afraid of Virginia Woolf?—certainly possible since Albee was a writer in residence at Wagner. 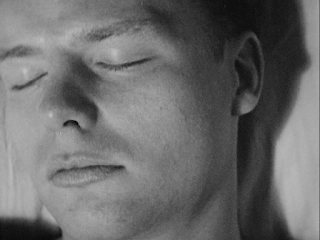 In Maas’ narrative, as in most of the films above, a handsome young man is lying on a bed asleep or half between sleeping and waking. We soon discover that this young man is living with his mother well past the time when most men his age have married and pursued their own lives, and he is anxious to break the ties he has with her.

In his dream he sees himself climbing down from a roof-top water tower, apparently the same water tower he sees outside his bedroom window. On the rooftop he goes over to peer down into a small rectangular space in the midst of the brick building in which lives, apparently a space used as a burning pit. He spies a body spinning into that space. 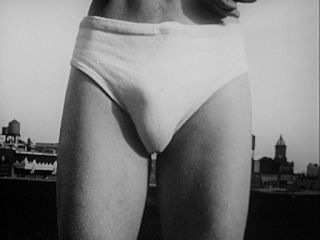 Meanwhile, he has not yet noticed that a well-fit man, clearly a body builder dressed only in work-out shorts, has begun his poses. Observing him, the man  leans slightly back as in awe of the figure as he continues to display his muscles. The boy’s eyes attend immediately to the crotch and just as suddenly the body-builder disappears into thin air.

Again the boy turns to look into the pit, watching another body spin through the air to its death. When he turns back he sees a lithe, young man without a shirt and dressed in white sheer pants climbing down the fire escape. The vision suddenly leaps into the rooftop arena and begins to dance, jumping, twisting, and turning in various positions to Ben Weber’s marvelous twelve-tone score.

Just as suddenly, the dancer also disappears, and the boy is left alone, puzzled by his visions. 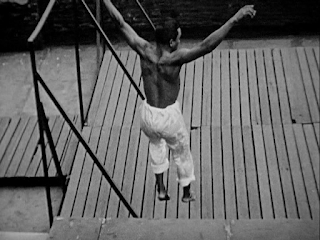 A final vision appears as a woman (“a princess”) holding an urn which eventually she hands the boy. Within is a dove which the boy holds lovingly for a brief while before letting it fly free to join other birds in the night sky.

The camera turns back to the boy back in his bed, as he rises, dresses, and joins his mother in the kitchen where she is frying him eggs for breakfast. She serves them up on a plate and he turns as if to eat, but finally with growing frustration and anger resulting from his dreams, he throws the plate to the floor, puts on his coat, and leaves the house, the mother looking out the window with a tear running from her eye, knowing that he has left home forever in search of happiness and love.

Before I proceed, I should mention that so far this young man’s visions parallel those of the other bed-bound dreamers of Anger’s, Markopoulos’, and Schmitz’s works, in which just such a bed-bound being faces his past ties to women, his attractions to the male body and his relationship to them. As in these films as well as those of Harrington, Broughton, and Rose the dream ultimately must turn his back on those images in order to face a future of his own making.

And in this case as in all of the filmmakers’ works I mention above (with perhaps the exception of Broughton’s) that future, however, is seemingly futile, a dark world which does not allow entry—indeed at one point, as in Schmitz’s Voices Maas’ young man stares into a window like a voyeur only to realize he does not belong to the world he witnesses therein—ending inevitably in a sense of total loneliness, isolation, and a death associated with traditional religious iconography. In short, there is little hope for the man dreaming of a life with other men. In coming out, the creator reveals his own fears of societal and religious rejection leading to an empty bed of the kind that Mark Gaspar spoke of in his 1989 film by that title. In short “coming out” ends, in these fearful early films almost always in a symbolic death. 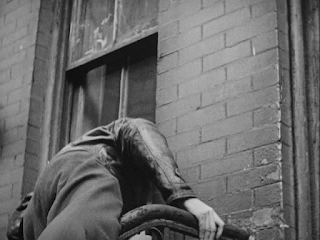 It’s a terrifying viewpoint, belied by what he have to presume were other realities that most of these young gay men found available to them. And, obviously, it is a viewpoint of young gay men who in the late 1940s and throughout the 1950s held very romantic notions about love and, by extension, life itself.

But never was this made more apparent than in Maas’s almost maudlin poetry which accompanies his film. Whereas the others’ films expressed these concerns, fortunately, mostly in the silence of their images, Maas’ central image of snow, alas, does not result in a quiet covering over the a dying world, but in an accompanying noisy recitation of his hot-house poetry that might remind one of a fin de siècle-like gay writer such as James Branch Cabell representing a homosexual world filled with fairy queens, princesses, and heroes in shining armor.

After the preface, read as the screen is dark, to the quite arresting first images he creates, Maas verbally intrudes with an endless series of tremulous poetic lines that turn the modern angst of his black-sweatered mid-century hero into a doomed figure of the past who apparently cannot escape “the iron lock of love,” warning us of even the man’s loving mother:

Mother, mother, your chains of flower twine like a hangman’s chord.

Alone the lonely seek the happiness happiness is.

As our young gay hero climbs down from the water tower to look into the pit of what he fears will be his life, the poet in Maas cannot help but send him verbally spinning out of control: 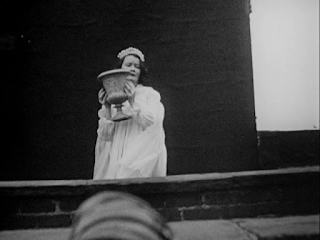 “Down the ladders of dream the boy descends into the sweet country where joy triumphs in the wish and anguish bearing the scar of the kiss takes fire in a vision of love whose vision are the lonely pictures of pleasure, fairy princesses, crowned hero...” etc.

The fairy princess, in fact, shows up:  “In a dream the princess comes bearing a fairy urn of blessedness. Within is a dove.”

As our unhappy young man discovers the dove, finally letting it free, the poet recites:

From your hand the dove flies high

Joining doves in the night sky

Fly, fly, high in the sky

Fly, fly with the stars before dreams

Before overall, the cold snow falls.

Finally, as the young man leaves his home for what seems like a permanent search of the streets of New York City, we get another despairing stanza to see him off:

Where is the door through happiness comes dancing

As the terror of day is lost in the tinkling of stars.

Through the walls of loneliness the dreamer goes

The cross of his longing burns through the shadows

And always the spectral angel haunting the meadows

of want and the snow, the falling snow. 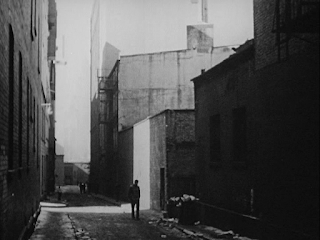 Maas’ images of that new world, mostly of dark and dreary streets, abandoned buildings (which appear as well in Schmitz’s and Rose’s work), backlots of litter and ruin, and finally a cemetery with reliquaries and shrines where he finally curls up as if he were making a snow angel on the ground before being buried up by the snow itself—are all quite striking and explain the interest in his films by critics such as Jonas Mekas. But, alas, I can’t separate Weber’s powerful music and Maas’ fascinating imagery from the sentimental viewpoints expressed in the filmmaker’s poetic endeavors.

We realize that for many artistically inclined young post-war boys suddenly facing a world without the normative familial and cultural structures of life must indeed have terrified them regarding their futures; but how I wish, at times, for the wisdom of another gay man living in New York at the very same moment, Frank O’Hara:

Grace / to be born and live as variously as possible.