carrying the gag to its limits

Alice Guy’s and Romeo Bosetti’s Gaumont production of Le Matelas alcoliqe (The Drunken Mattress) (1906) is certainly of her best early comedies, and is quite clearly the most physically engaged of her works. In this 10:15 short, a man playing in drag a maid cleaning and stitching up of an old mattress in need of repair. 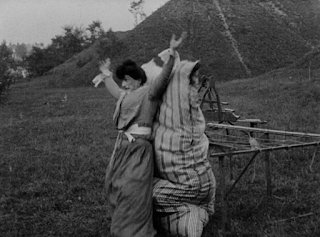 Presumably, Guy determined to put her central character in woman’s clothing more out of necessity than comic intent; surely no everyday woman might be able to lug around a double mattress with a drunken man stitched up within. Even the male behind the character is challenged by the piece of bedding as she transfers it from a couple’s bedroom into a field in order to re-stuff and sew it together before returning it in an almost impossible voyage back into the village bedroom.

En route it is half-carried and rolled down a long hill, falls from a bridge and must be lugged back up a high stairway, falls again into a deep hole (perhaps a grave), is hauled back up to the couple’s room, laid upon by husband and wife twice, and, finally, tossed out their window in disgust. 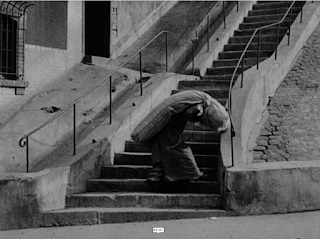 Somehow the drunken lout survives, along with maid, both of whom are carted away by local police in reward for their remarkable endurance.

If the figure's feminine apparel may be only a matter of necessity, it also creates an odd sense of mischievous revenge on the typical bourgeois heterosexual couple. Who else but a queer would want to go to such astounding lengths to make sure that another man—and a drunken one at that— intrude upon their most intimate moments of their life? But this maid is determined, where any normative, non cross-dressing maid, would have long ago been so disgusted by a mattress that pokes, bends, rolls, rubs against others, and falls and stands of its own will, that she would abandoned the task. If the filmmaker Georges Méliès put demons into the bedroom in order to raise havoc with its innocent inhabitants, Guy is more fascinated by a normal human being serving the same purpose by simply being inebriated by demon rum. 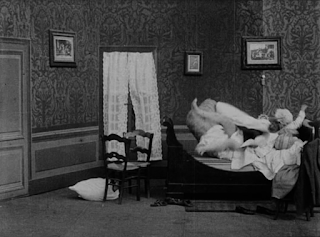 Posted by greenintegerblog at 8:39 AM