the man from france

A young man on the very cusp of adulthood spends his entire spring days with his other male friends in the locker rooms and showers undressing and dressing before and after swimming, running, leaping, and other athletic engagements. The world Flemish director Bavo Defurne creates in hazy black and whites is a kind of nirvana of the homoerotic without any of the participants apparently being aware of one another’s bodies. 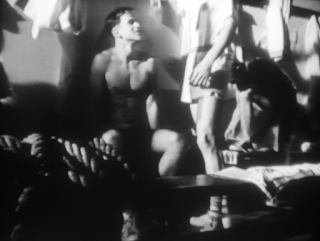 In fact, except for the young man who narrates this story they seem to have no individual identity. We learn nothing about any of their personalities, emotions, thoughts or even names except for when the credits identifies the narrator as Olaf, naming the others as part of a group that includes Bart, Ignance, Sven, Tom, Adriaan, Johan, Werner, Alexander, Mark, Stefaan, Alain, Oswin and Geert.

Olaf describes them as his friends that function almost as a collective. “There’s something that bonds us together. It’s like a secret agreement that we’ll always be friends. We’ll always stick together,” who live daily as a unit is a kind of suspension. “I sometimes think time won’t move here. It’s just like everything will stay like it is right now.”

They always sing in the shower, he notes, “just as if we all had one voice.”

In other words, our Olaf seems to be describing a bubble of total male innocence in which the participants gladly join in a half-sleeping, half-waking spell of juvenilia from which none of them ever wants to be awakened. It is, in short, precisely what results in so many jocks’ inability to develop into mature adults. You see them in the bars, escaping the marriages they have agreed to because it is the local custom and their often unsatisfying jobs to which they have assigned their daily lives as they escape into televised sports competitions or join up in weekend scrimmages in desperation to relive those halcyon sports-minded days of their youth: the universal Peter Pans who almost intentionally never really wanted to grow up. 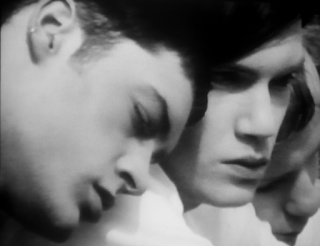 Except that their bodies are no longer lean and sexually appealing, and their drunken mutual cheerleading for their favorite team can never replace the excitement and grace of pushing, pulling, rubbing, and wrestling each other with utter unawareness of their desperate desires to simply touch each other’s skin, their addiction to one another’s smells of sweat, piss, spit, and hair. Our narrator expresses it in terms of the showers themselves: “The showers have a special smell. It’s like the sea or a wood in the summer.”

Like these faux naïfs, Olaf seems to believe that anything is possible. As he expresses it early in his narrative: “Everyone can make it in life. I think everything is possible.” A little while later he restates his near-absurd optimism “There’s nothing you can’t do that can be done. You need to work out really hard. And I’m not afraid of that.”

Yet, we soon discover, Olaf is a liar, not to his friends or us who overhear his thoughts, but to himself. Or, if nothing else, he is filled with contradictions. I’d suggest that he is simply a person who has not yet come to terms with his own thinking or what he describes as “ideals,” or “beliefs.”

In fact, the director’s images of this handsome boy also contradict his own naiveté. Although he speaks of the collective spirit of his friends, he is often shown apart and away from them, and hardly ever sharing in their singing, grabbing, and playful group activities. Although he describes their dependence upon one another, in the very next sentence Olaf  ponders: “Why is it that people are not always the people you want them to be? No matter what, we can’t miss each other. We’re alone, everyone.” 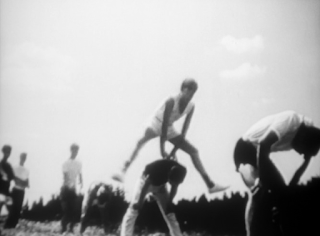 During these comments, the boys are playing leapfrog, filmed in a manner that reminds one a great deal of the leaping games of naked males in Eadweard Muybridge’s 1887 moving photographs of athletes. In Defurne’s film, however, the moment that Olaf insists  “We won’t let each other down ‘cause we’re best pals,” one of the leapers crashes into him knocking both of them to the ground.  At another point when the boy is insisting on their shared commitment to one another, the camera shows two gatherings of the boys on opposite sides of a long rope, one group eventually toppling the others struggling to do the same to them.

At another moment when he is spouting his idealistic vision of the infallibility of will power, suggesting that, after all, “All my friends are there,” he pauses to express his fearfulness of their beating him to what he might be seeking: “I am just afraid a little bit of the idea of a lot of people wanting what I want.”

What he seems to be seeking, moreover, does not appear to be what any of the others might even imagine him desiring. Olaf begins his long conversation with the camera with these words:

“I think I can tell you now I want to be a movie star. I thank I’m no boy anymore. I’m ready for real life. I’ve heard a man’s coming from France. It’s for a movie. They’re going to make a movie about a young runner in the war or something. Anyway they’re looking for an actor. The leading part I think. I’d like to do that.”

One cannot imagine a more isolating desire than his, something that might certainly require a kind of willed selfishness that would quickly take him out of the very circle of friends he defines as representing something outside of time and change. 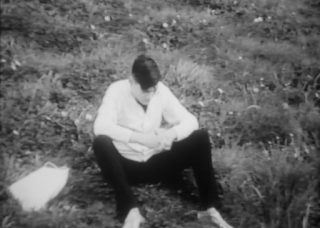 Not only is he quite aware of he own coming of age but of his necessary departure from the world in suspension that he pretends to embrace. Although all he describes is about a boyhood fantasy, he recognizes that he is “no boy anymore.” And despite his argument that they need to stick together in order to survive, he is absolutely ready to let a stranger guide him into a new universe. Even if, as he hints by the end of the day, that the stranger—critic Tim Isaac correctly associates him with Beckett’s Godot— has not and may never truly visit, it is clear that Olaf will remain a believer, that even if he never leaves his never-never-land of male sports camaraderie he will know there is another world outside of his to which he was hoping to enter.

That’s not to say, of course, that his views of that “outside world” are not hackneyed and doomed to failure. As his model for an “real actor” (“I want to be an actor. Not just any actor. A different kind of actor.”) he has chosen the outrageous Grade B figure Johnny Weismuller, mostly because he was a swimmer, and Olaf swims—although admitting he’s not sure he’s very good—with great seriousness. As the narrator says of the others, again putting himself at a distance from those with whom he proclaims an unspoken bond: “It’s just that the others are just messin’ about. They go swimming just to enjoy themselves. I like that too. But above all I want to be strong one day.”

But the very fact that his fantasy figure is a male living for much of the films alone in a jungle with only animal friends, suggests that there is no woman in this boy’s vista. He never mentions a Jane nor any woman in his meandering confession. Rather, a bit like a gay body builder of the 1950s, Olaf projects himself into the world of athletic muscle builders, the perfect target when he is whisked away by the stranger to the Hollywood of his imagination for the beefcake photographers such as Bob Mizer and his Physique Pictorial, simply a less campy version, in fact, of the photographers Defurne referenced in his 1997 film Sailor, Pierre et Gilles.

The poor boy, locked away in the embryo of Jean Genet-like compound of a locker room instead of a prison, has no idea what is in store for his slowly awakening sense of a world outside of where he begins to spend his Spring. If his longings are still incoherent and even laughable, we comprehend them as, just as he is beginning to perceive, something that will sever him forever from his sports-loving friends.

Olaf suggests that “At the end of the day we say goodbye as if there were no end to it.” But as he grabs the hand of one departing friend and the others wave goodbye, we realize the end is nearer that he might ever imagine. 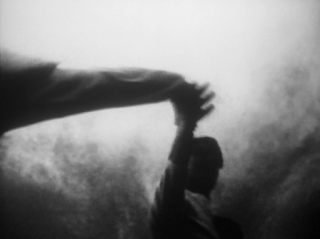 Posted by greenintegerblog at 5:04 PM