the importance of being naughty

Ken Russell (writer, after the play by Oscar Wilde as translated by Vivian Russell, and director) Salome’s Last Dance / 1988

I must admit that I am not exactly fond the films of Ken Russell, who approaches basically classic 19th and early 20th century artists and their works by preliminarily deconstructing their lives and literary structures before he transforms them into camp parodies that with large budgets, flamboyant sets, and lots of garish colors he pretends to make into extravagantly transgressive statements. It’s somewhat like Cecile B. DeMille in his later years aspiring to be a kind of Charles Ludlam who produces works viewed by his white suburban admirers who leave the theater feeling that they just experienced something vaguely avant garde and sexually naughty that simultaneously has provided them with a sense of educational uplift. He is a bit like a giddy interior decorator with a big story to tell.

It reminds me somewhat of a course I once taught on contemporary performative art and theater works to a class made up of suburban Philadelphia back-to-school adults at Tyler School of Art outside of Philadelphia. They loved it; for them it was like reading The Village Voice and understanding most of its art, theatrical, and literary references without having to travel to New York to see them.

Russell’s 1988 film Salome’s Last Dance might almost be submitted as exhibit A for evidence for what I said above. Evidently, as early as 1974 a drunken and always ready to be seen as outrageous gentleman Russell, having caught a stage production by Lindsay Kemp—the gay mime, actor, dancer who had an affair with David Bowie and staged and performed in the  Ziggy Stardust concerts—of Oscar Wilde’s Salome, began calling studios declaring he could film the work with Kemp for only 120,000 pounds. Several studios were very keen on the idea until they discovered that Salome was to be portrayed by a man in drag. But Alan Ladd Jr. at 20th Fox was willing to go ahead with the idea, imagining that even if the film were to bomb it would make back such a modest investment. But upon seeing the production for a second time, Russell got cold feet and backed out of the project.

Yet somehow remnants of the idea must have continued ricocheting through the forever frothing vaults of Russell’s brain since he finally decided to return to the idea as part of his three-film deal with Vestron Studios (who’d had a great hit in Dirty Dancing the previous before, 1987), this time casting, against all of Strauss operatic conceptions, a twiggy-like newcomer with little on-film acting experience, Imogen Millais-Scott, who due to a glandular fever went blind three weeks before filming. Not to be outwitted by his own outrageousness and assurances to bring the film in with a budget of a million, Russell insisted she remain in the role.

The New York Times Vincent Canby found her a “quite legitimate Salome” despite the fact that she was “small, slight, and blond, with a heart-shaped face and...a Cockney accent,” describing her as being “part-Lolita, part-Giulietta Masina and part Cecily from The Importance of Being Earnest.” 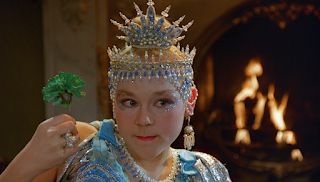 Time Out was far nastier in their summation of her acting talents, if not entirely mistaken by describing her as “seemingly a graduate of the Toyah Wilcox School of Over Emphatic Diction and Hyper-active Eyelids.” Let us just say she has none of the allure of the silent version of Wilde’s play on screen performed by Alla Nazimova.

It doesn’t truly matter, at least at first, since the real focus of Russell’s film appears to be Wilde himself (Nickolas Grace) and his lover Lord Alfred “Bosie” Douglas (Douglas Hodge) who on Guy Fawkes Day in 1892 arrive at Alfred Taylor’s (Stratford Johns) and Lady Alice’s (Glenda Jackson) co-ed bordello for a little fun in bed, where secretly the whorehouse workers, Taylor, and Lady Alice, and the brothel maid (also Millais-Scott) have planned a special performance for their dear friend. Since the English Lord Chamberlain has banned Sarah Bernhardt from performing Wilde’s play on stage due to the fact that it concerns religious figures, the denizens of this whorehouse plan a one night only private performance of the work, with Bosie as John the Baptist, Lady Alice as Herodias, and Taylor as Herod, with regular customers and other prostitutes, male and female, performing in the minor roles. Russell himself plays a photographer of the events, an in-joke since the director began his career as a still photographer. 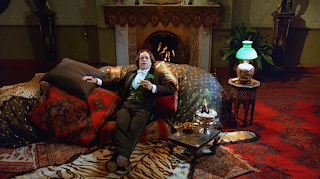 Near the small basement stage, upon a couch stuffed with colorful outsized pillows like something out of The Arabian Nights or a hippie pipe dream, Wilde sits. Sipping on champagne and later on the face and eventually—we presume since for a long period of the performance he disappears with the boy—the penis of one of the minor actors whose face is painted gold, he witnesses most of the single performance of his banned play.

While Wilde is permitted to escape for a period and even Herodias gets an opportunity to fuck the two beefy soldiers in a large offstage costume box, we are forced to sit out the play which, having watched it now three times in a silent film version and twice in this cinematic rendition is, quite frankly—unlike Strauss’ opera which I have now seen twice—insufferable as a piece of theater. 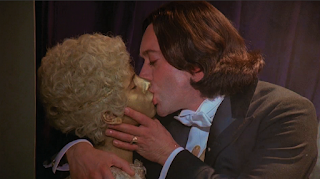 Despite the truly great acting talents of Johns and Jackson, Wilde’s lines do not exactly lyrically float from his script. Even Herodias is ready to strangle her incestuous husband—as in Shakespeare’s Hamlet, he is the brother of her previous husband whom he murdered—evokes the nattering of the imprisoned prophet as being meaningless words from his God or complains about the strangeness of the moon, or suddenly, after staring at his step-daughter for hours, demands once more that she dance for him. In fact, the only straight-talker in the bunch is Herodias (Jackson).

And I’m sorry, but if I have to listen one more time to Salome compare John the Baptist’s voice, hair, and lips to every lovely experience her small inexperienced head she can imagine, I too may run off with the page boy.

Actually Russell might very much like that. Because the play, as lovely as he occasionally frames it, is not really what interests the director either. Roger Ebert speaks insightfully about this director’s talents when he writes:

"What do we learn from this approach, and indeed from this film? Not much, except that Russell is addicted, as always, to excesses of everything except purpose and structure. After his previous film, Gothic which re-created a weekend idyll involving Shelley and Byron, Russell demonstrates again that he is most interested in literary figures when their trousers are unbuttoned. And even then, he isn't interested in why, or how, they carry on their sex lives; like the defrockers of the scandal sheets, he wants only to breathlessly shock us with the news that his heroes possessed and employed genitals." 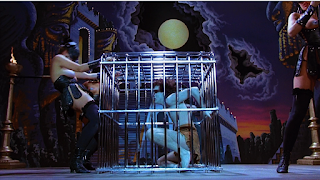 What we feel Russell cares more about are the naked breasted Amazon-like guards who whip  and torture the sexually-pure John, or the lascivious dwarfed Jews sitting at Herod’s table who—in what surely must be one of the most blatantly anti-Semitic scenes of late 20th century cinema—endlessly fuck the bordello’s female beauties. The camera spends more time focusing on the inexplicable appearance of three cross-dressers who advise Herod than on the plot.

And, of course, he knows what Herod and his entire audience is truly waiting for, Salome’s infamous dance. A veiled body-double of the sickly Millais-Scott goes through the grinds before lifting up the final article of clothing you might describe as a veil to reveal—o quelle surprise—something approximating Lindsay Kemp's old cock. 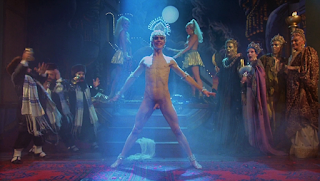 When the truly sick Salome begins to tongue-kiss John the Baptist’s severed head, we all know it’s time to toss a spear into her body and call in the police, which Russell predictably does, to arrest not only the owners of this house of shame, Alfred Taylor and Lady Alice, but, way ahead of his actual arrestment in 1895, Wilde himself for his relationship with Bosie, the boy whose head is still on the silver platter as the story ends.

While Wilde quips that the play should be performed again, this time with him playing John the Baptist and Bosie playing Salome—obviously suggesting that it is he who has been the innocent seduced and punished for his purity—Lady Alice, told that her chamber maid has died, insists that it is been nothing more than a “misadventure”: “She slipped on a banana skin.” The three scoundrels raucously laugh as the police wagon carries them off. Evidently the real joke behind Russell’s farce is that the whole affair has been something akin to a snuff film, a film in which instead of appearing to be killed the heroine is actually murdered.

Sorry if I missed the cleverness and humor of the whole thing. I guess for our educational edification Russell has shown us just how truly perverted old Oscar and his queer friends were. He ought to have been locked up in Reading Goal—and the key thrown away. And what a naughty play that was!

For several years now this movie has been difficult for US citizens to get hold of. It is now, however, featured on the British Film Institute’s (BFI) new internet site. But as far as I am concerned, they can put it back into its can.

Posted by greenintegerblog at 1:07 PM